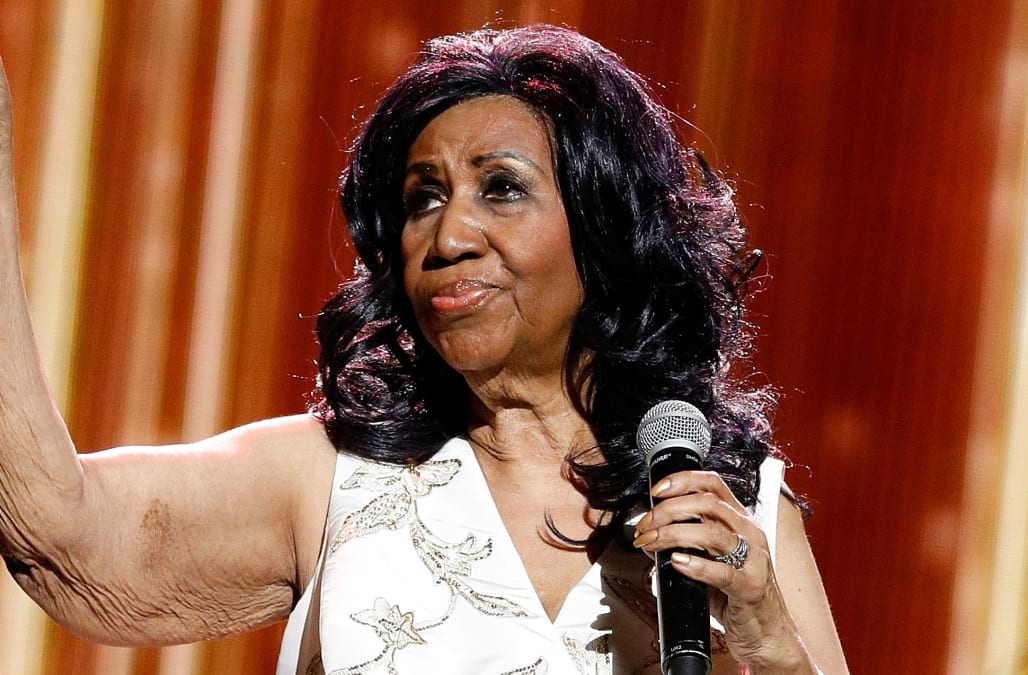 Aretha Franklin has canceled a scheduled July 1 concert in Toronto due to health concerns.

The Queen of Soul, 75, was to have a played a date at the Toronto Jazz Festival at the Sony Centre for the Performing Arts. But the Toronto concert hall on its website Tuesday said Franklin was unable to travel to Toronto this week "as per doctor's orders."

The statement did not expand on what possible illness postponed her visit, but Franklin is now set to perform at the 2018 Toronto Jazz Festival on June 29, 2018.

A 21 year-old Franklin poses for a portrait, with classic ‘60’s hair.

Aretha wore her hair much shorter in 1965.

It’s all about the feathers and sky-high hair!

Aretha getting ready at Symphony Hall in a lovely cream lace dress.

Aretha and this gentleman have 4 different patterns between the two of them!

Grammy Award in hand, Franklin embraces the bold and sparkly in this attention-grabbing ensemble.

A New ‘do and a fur coat keep Aretha stylish in the mid seventies.

Aretha accessorized her white gown with a flower in her hair at the 1977 Grammy Awards.

Back to the fur (and adding bangs!), Aretha is known as the “first lady of soul.”

Aretha rocks a one-shouldered gown on stage in 1982, with ruffles the entire length of the dress.

Her hair may be mellow but Aretha keeps the drama high in this bold white gown.

Aretha in black, gold and red walks hand in hand with Clive Davis.

Clearly a fan of fur, Franklin performs at the Lincoln Memorial.

Aretha’s hair is high and so is her hemline! She shows off her legs in this black and white dress at the Essence Awards.

Taking a more laid back route for the Grand Opening of the Rock and Roll Hall of Fame, Aretha performs in a bright top and white pants.

Ladies and gentlemen, the Queen of Soul wearing a cream dress and matching fur coat at the 39th Annual Grammys.

Franklin performed at Radio City Music Hall for a VH1 Special in this pink and black patterned gown.

It appears Franklin has snowflakes on this gown she wore to the 45th Annual Grammy Awards, fitting for the month of February!

Franklin wore the color of success to the 32nd Annual Daytime Emmy Awards.

Aretha wore this patterned dress to the 2005 Tony Awards.

It’s all about the drama on the red carpet, and Aretha knows how to bring it with this outfit!

Talk about a statement: between the tulle, gemstones and fur coat, we know that royalty has arrived.

Golden from her hair down to her toes, Aretha made the Tony Awards red carpet shimmer.

Aretha looked classically chic as she stepped out in New York City in this long grey coat.

Aretha wore a statement necklace to amp up the glam of this black dress.

Aretha attended the Pre-Honors Dinner for the BET Honors 2012 in this bright blue embellished gown.

Happy 70th, Aretha! The Queen of Soul looked totally glamorous one year ago, today, at her birthday celebration.

Franklin lights up the stage with her voice and bold sense of style.

Franklin looked effortlessly chic in this black and silver ensemble while attending “Motown The Musical.”

Aretha absolutely shimmered at the 35th Kennedy Center Honors in this striped gown.

Franklin has been performing for 56 years straight, although in recent years has been suffering from ill health.

Ticketholders will have the option to receive a refund or use their tickets for the 2018 concert date.

This article was originally published on The Hollywood Reporter.

More from Billboard:
Tech Company Revives Century-Old Toronto Concert Hall, Where Zeppelin, Zappa & The Who Once Rocked
U2 Pays Tribute to Leonard Cohen in Toronto: 'We Could All Be So Lucky to Live a Life Like That'
Depeche Mode's Global Spirit Tour Rakes in $46.5 Million (and Counting)