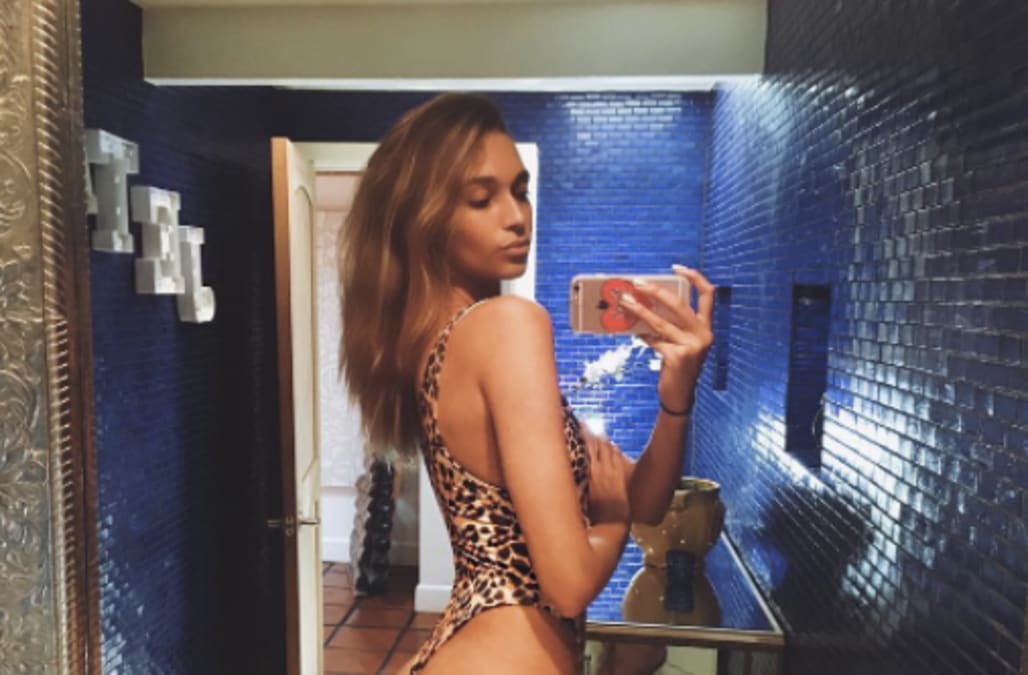 Nothing says Happy Father's Day like a racy booty shot!

April Love Geary, Robin Thicke's 22-year-old girlfriend, sent temps soaring in her most recent Instagram snapshot on Sunday. Geary showed off her booty in a racy, leopard-print thong swimsuit taken inside a bathroom.

"Heatwave," the model captioned the snap.

Robin Thicke's girlfriend is a bikini babe
Heatwave
🎶 just another day in paradise 🎶
Loving the sun but ready to go home and see my pups 🐶
Mommy long legs
@recklessgirls 🐾
🍓
Here we see a skeleton tanning in her floral bikini
Already missin the heat from the Maldives.. 64 degrees is too cold 🙈
Last night. 🌀
#badwood ❣
"I'm not the one staring at me"... But I love the one who is. *cough cough* @robinthicke
You make life beautiful just with your presence alone ✨
🌴🌴🌴
Forget rosé all day... 😇
Here's a pic of me enjoying my life and not hiding behind a phone screen writing hateful comments on people's Instagrams. 😇.... Or it's just a pic of me stepping on coral, who knows??
Perfectly happy in my own skin 😊
Mermaid moments 🦄
🌺
Me: I don't like this angle. Robin: do I looked ripped? Me: yes Robin: post it...😂😂😂
SUNS OUT ☀️
🍉🍉🍉
Hi lover boy 🌞
LOVE my new @frankiesbikinis one piece 🌸
Good Times
Up Next

In the totally revealing selfie, the young model posed sideways, giving ample view of her curvaceous backside. While the sexy snapshot definitely got people talking, her 40-year-old boyfriend was noticeably absent.

The two have spent the past week in Paris on a romantic getaway, and April's Instagram feed is filled with photos from their time away. The model made headlines just a couple of days ago when she stepped out in a completely see-through top with only star adhesives covering her modesty.

April and Robin, who made their public debut as a couple at the 2015 Cannes Film Festival, also took part in an impromptu photoshoot in front of the Eiffel Tower. The brunette beauty looked gorgeous in a red-and-white striped sundress, while her beau kept it casual in a tan blazer and khaki pants.

We're guessing that Robin spent Father's Day with his 7-year-old son, who he shares with ex-wife Paula Patton. By the looks of April's selfie, however, she had plenty to do while her man was spending some quality time with this kiddo!

Check out the slideshow above for more of April's hottest bikini snapshots.