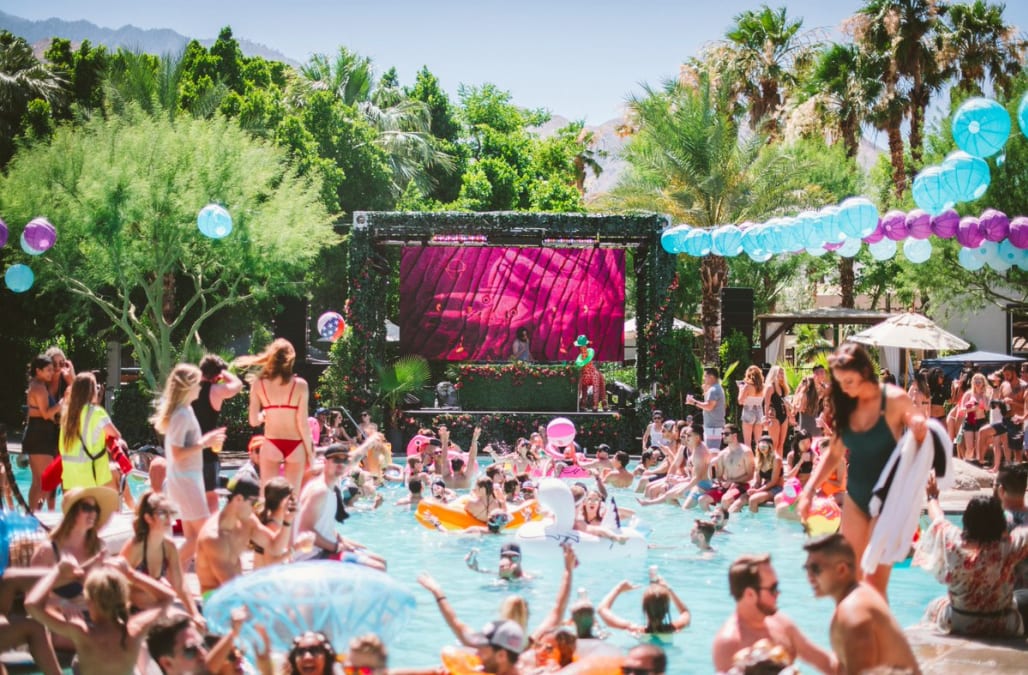 Splash House is a multi-venue pool party that occurs twice every summer in Palm Springs, California, at a rotating collection of hotel resorts in the sweltering Coachella Valley known for hosting the music festival of the same name.

But while Coachella has long outgrown its underground roots and usually leaves its guests weary from days of trudging between stages in scorching heat, Splash House fosters an intimate yet riotous environment that allows its guests the chance to experience the party from a pool deck or their hotel room's balcony. And many of the event's performers can't help but hang around and party on-site throughout the weekend, providing a chance for their fans to create some epic memories.

Splash House has grown from attracting about 600 people for its 2013 debut to nearly 6,000 for its most recent iteration on June 9-11. That weekend featured a stellar lineup chock full of dance music up-and-comers such as Bonobo and Lane 8, indie icons Hot Chip and even a rapper in SuperDuperKyle who topped the hip-hop charts earlier this year.

A few daring guests armed with a prime third-floor balcony spot behind the stage at the Renaissance Hotel called down to house DJ Thomas Jack with a megaphone after he finished his Saturday headlining set, imploring him to come up to their room and spin on their own decks they'd brought from home. Within minutes, the Australian crowd-pleaser was playing a guerrilla follow-up show to dozens of ecstatic followers. He was later seen crashing one of the festival's countless ad-hoc after-parties past 2 a.m., more than five hours after his original gig concluded.

It's easy to compare Splash House's concept to the extravagant pool parties that have taken over Sin City as Las Vegas has cemented its place in the electronic music scene. But while secluded DJs, obnoxious promoters and expensive tables dominate the Vegas scene, Splash House boasts an unpretentious attitude that makes it easy to love.

"The ease of having your room overlooking the stage allows you to jump out there at any time you want to, then come back into your room and have a bed, air conditioning and a couch," said co-founder and event producer Tyler McLean. "You're still part of a party, but it's so easy to go back and forth."

Even if you don't run into your favorite artist, you'll likely feel like you got your money's worth at Splash House. With a ticket cost of $130, and four-person ticket/hotel packages starting at $900, it's one of the more reasonably priced music festivals out there. And with Palm Springs offering a uniquely boutique setting -- the town once claimed to have the highest amount of pools per capita of any municipality in the world -- don't expect McLean to test out this concept in other locations anytime soon.

"It's hard to imagine doing this in another place," McLean said. "We're super happy with everything we've got going on right now. More so than expanding, we're just trying to put on the best show we can."

Splash House will commence its second weekend on August 11-13 at the Renaissance, Saguaro and Riviera hotels in Palm Springs.