A complete history of Taylor Swift and Katy Perry’s feud 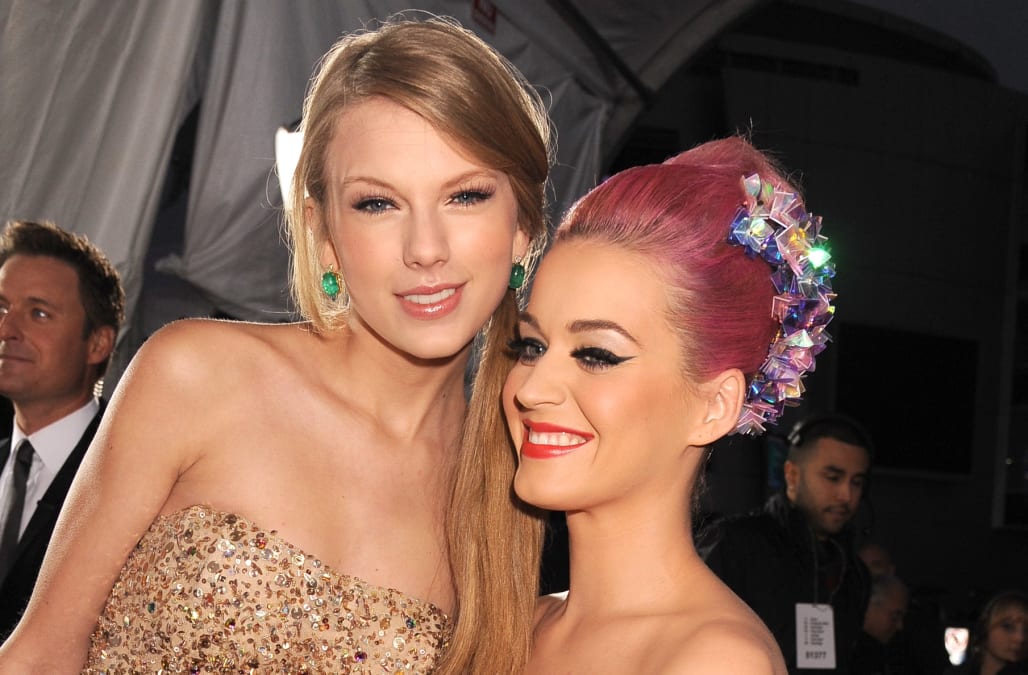 At the stroke of midnight on June 9, Katy Perry was set to release her latest album, Witness, online. The singer had been hyping up its big premiere this week, asking fans on Twitter to count down until the exact moment until Witness dropped. Then, just a few hours before its release, Taylor Swift's official fan Instagram account announced that she would finally be releasing her entire catalog of songs on all streaming services at midnight as well. Coincidence? We think not.

Those who've kept up with these two pop stars would know the timing of Swift's decision was conspicuously shady (and maybe savvy). If you recall, back in 2014, Swift pulled all of her music from Spotify, making her songs almost impossible to stream for free. But then on June 9, her fan page claimed she had finally decided to release her complete catalog to all streaming platforms in celebration of selling more than 10 million 1989 albums around the world and more than 100 million songs. As an extra bonus, Swift also discounted the price on all of her existing albums on iTunes. The Internet immediately cried foul.

Taylor is puttin all her music on Spotify at 12am to ruin Katy's album release, so now Beyoncé must give birth at 12am to eclipse them both😭

Will never get over this on Katy's behalf https://t.co/yrg5ja83k9

katy perry: the countdown starts now make sure to stream my album on spotify toni...

Swift's latest move is only the most recent petty exchange between the two artists, who have been engaged in a long-standing feud. For those who aren't aware of all the drama throughout the years, here's an explainer of when, why, and how this rivalry evolved.

29 PHOTOS
Katy Perry out and about
See Gallery

Was it always this way?

No, not at all. When they first began their rise to fame, everything was just peachy between the two burgeoning pop stars. They fawned over each other on Twitter and even shared the stage once at one of Swift's concerts in 2010.

When did the beef start?

Things took a turn around 2013, when Swift was in the middle of her Red world tour and three of her backup dancers reportedly left to go work with Perry on her Prismatic tour. The dancers had reportedly already worked with Perry in the past, and when she launched a new album in the middle of Swift's tour, she reached out to them to ask if they would like to join her once again. "We were with Katy for two and a half years, she's like family to us," said Lockhart Brownlie, one of the dancers, in an interview. "We weren't really dancing in Taylor's tour, anyway, so I had got a little bored and I really wanted to do a promo tour."

Who talked about the feud first?

Swift was the first to publicly acknowledge things were not exactly rosy between her and Perry, even though she never mentioned her name directly. In a 2014 interview with Rolling Stone, Swift opened up about a rift with a former friend. "She did something so horrible," she said. "I was like, 'Oh, we're just straight-up enemies.' And it wasn't even about a guy! It had to do with business. She basically tried to sabotage an entire arena tour." She later confirmed her song "Bad Blood" was indeed about that same nemesis. "I know people will make it this big girl-fight thing," she said. "But I just want people to know, it's not about a guy."

Katy responded the day after the profile came out online with a cryptic yet pointed tweet, which even included a reference to Mean Girls:

Watch out for the Regina George in sheep's clothing...

How did Nicki Minaj become involved?

A year later, after the MTV Video Music Awards nominations were announced, Nicki Minaj took to Twitter to express her frustration that her videos for "Anaconda" and "Feeling Myself" had been shut out of the Video of the Year category. "If your video celebrates women with very slim bodies, you will be nominated for vid of the year," she said. Swift apparently felt Minaj's dig was directed at her and responded with a tweet that read: "I've done nothing but love & support you. It's unlike you to pit women against each other. Maybe one of the men took your slot." Perry quickly jumped into the social media spat with a post that all but openly called Swift a hypocrite—but again, no direct mention of her name. Swift never responded back.

Finding it ironic to parade the pit women against other women argument about as one unmeasurably capitalizes on the take down of a woman...

How did Calvin Harris get involved?

In the summer of 2016, the breakup between Swift and her ex-boyfriend Calvin Harris started to get a little messy. Not only had Swift already moved on with Tom Hiddleston, but soon after, it was revealed that she had ghostwritten one of Harris's hits, "This Is What You Came For," even though he had never spoken of a collaboration together. Harris felt offended by the PR stunt and, like most of the cast of characters in this soap opera, took to Twitter to vent. "I figure if you're happy in your new relationship you should focus on that instead of trying to tear your ex bf down for something to do," he wrote in a since-deleted tweet. "I know you're off tour and you need someone new to try and bury like Katy ETC but I'm not that guy, sorry. I won't allow it."

Katy once again jumped in the ring with another cryptic subtweet.

So what's the latest?

During Perry's busy promotional tour of her new album, Witness, her feud with Swift has come up over and over again. And while in the past Perry has rarely directly commented on it, this time around, she's openly discussing the long-running rivalry. In an interview with Entertainment Weekly, Perry was asked about her connection to "Bad Blood." "Well, that's not my question to answer—if it's about me," she responded. "One thing to know is: You can't mistake kindness for weakness and don't come for me."

Then came her appearance on Carpool Karaoke, in which host James Corden openly asked her: "There's Taylor beef . . . And when are we going to clear that beef up?" "That's true, there is a situation," she replied. "Honestly, it's really like she started it and it's time for her to finish it." Perry then went on to give her side of the story about what happened with the great backup dancer defection in 2013 and explained how she tried to call Swift to talk about it. "I do the right thing any time that it feels like a fumble," she said. "It was a full shutdown and then she writes a song about me, and I'm like, Okay, cool, cool, cool, that's how you want to deal with it? Karma."

Cue up to Perry ramping up for her big release and Swift pulls the ultimate power move by freeing up all of her songs on Spotify. Neither of the two singers have publicly commented on that event, but if the past is any indication, we should probably keep our eyes on Twitter or the much-rumored new album by Swift, which presumably drops later this year.

Could a truce be nearing?

The weekend after the release of her album, Perry seems ready to let bygones be bygones with Swift. During an interview with Ariana Huffington, the singer surprisingly extended an olive branch. "I am ready to let it go," she said. "I forgive her and I'm sorry for anything I ever did, and I hope the same from her. I think it's actually time. There are bigger fish to fry, and there are real problems in the world." Taylor, ball's in your court.