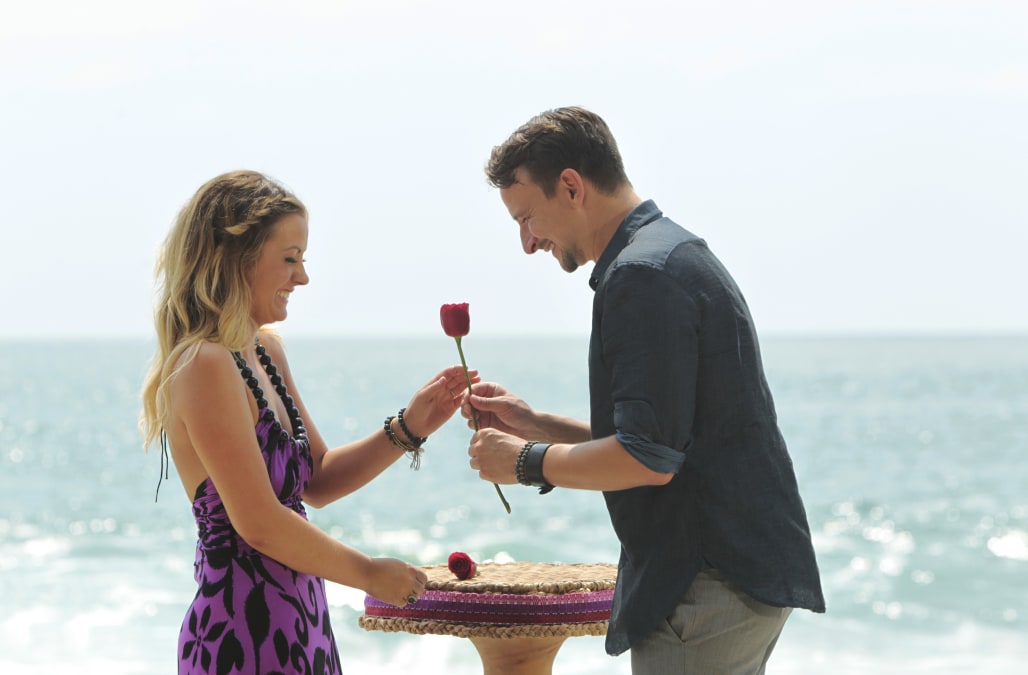 New details have emerged following the production shutdown of "Bachelor in Paradise," which abruptly stopped filming in Mexico last week after a producer filed a formal complaint of workplace misconduct with Warner Bros.

The fourth season of the reality show was underway in Sayulita, Mexico when the production crew allegedly shot a drunken encounter between two cast members, a male and female. From there, the details have conflicted between media outlets -- and has continued changing over the past two days.

TMZ has reported an account of the events from the male cast member in question: He and the woman were allegedly told by producers that "one of the storylines would be the two of them hooking up." He was drinking at a bar when the woman came over and sat in his lap. Things escalated, and there was "intense rubbing" captured by the cameras.

The two did not have sex, the male told TMZ, because he was unable due to the amount of alcohol consumption.

RELATED: Here's how long every "Bachelor" and "Bachelorette" relationship lasted

35 PHOTOS
'The Bachelor' and 'The Bachelorette': Length of every winner's relationship
See Gallery

"The Bachelor" (Season 1): Alex Michel didn't propose to Amanda Marsh when he chose her over Trista Rehn back in 2002, and they broke up after several months of dating.

"The Bachelor" (Season 2): Aaron Buerge and Helene Eksterowicz broke off their engagement after just a couple of weeks, continuing the franchise's early struggle to result on a long-lasting relationship. (Photo by Scott Gries/Getty Images)

"The Bachelorette" (Season 1): Trista Rehn (now Trista Sutter) and Ryan Sutter are the ultimate Bachelor Nation success story. After getting married on national TV in 2003, the couple welcomed two children together and are still married 14 years later!

"The Bachelor" (Season 3): Andrew Firestone proposed to Jen Schefft at the end of his season, but the couple broke up a few months later. They reportedly remained friends.

"The Bachelor (Season 4): Bob Guiney didn't propose to Estella Gardinier at the end of his season, but he did give her a promise ring that she happily accepted. Clearly, the promise didn't last long, as they broke up a few weeks after the season aired.

"The Bachelor" (Season 5): Jesse Palmer and Jessica Bowlin broke up after several weeks of dating. They never got engaged. (Photo by Michael Hickey/WireImage)
"The Bachelorette" (Season 2): Meredith Phillips picked Ian McKee, who proposed to Phillips in the season finale. They broke off their engagement a year later in February 2005. (Photo by J. Merritt/FilmMagic)
"The Bachelor" (Season 6): Byron Velvick and Mary Delgado were together for five years, but eventually broke up in 2009.
"The Bachelorette" (Season 3): Jen Schefft initially didn't choose either of her final two men, but during a live final rose ceremony, Schefft ended up choosing Jerry Ferris. When Ferris proposed, though, Schefft denied his proposal. Get all that?
"The Bachelor" (Season 7): Charlie O'Connell (brother of actor Jerry O'Connell) and Sarah Brice dated on and off for five years before calling it quits for good in 2010. They were never engaged. (Photo by Jeff Kravitz/FilmMagic)
"The Bachelor" (Season 8): Travis Lane Stork, who you may recognize now as a current host of "The Doctors," and Sarah Stone broke up shortly after their season of the show aired in 2006.
"The Bachelor" (Season 9): Lorenzo Borghese and Jennifer Wilson dated for about four months before breaking up in January 2007. Borghese never proposed.
"The Bachelor" (Season 10): Andrew Baldwin proposed to Tessa Horst in the season finale of his season, but the couple ended their engagement a month later. They continued dating for a few months before breaking up for good in the fall of 2007.

"The Bachelor" (Season 11): Brad Womack made history by choosing neither DeAnna Pappas nor Jenni Croft, leaving him with nobody at the end of the season.

"The Bachelor" (Season 12): Matt Grant and Shayne Lamas got engaged on the season finale, but broke up just a few months later in the summer of 2008.

"The Bachelorette" (Season 4): DeAnna Pappas and Jesse Csincsak set their wedding date for a year after the finale of their season, but broke up before they could get there after six months of dating. Pappas would later return for Season 13 of "The Bachelor," and Csincsak ended up marrying a contestant from that same season.

"The Bachelor" (Season 13): Jason Mesnick chose Molly Malaney over original winner Melissa Rycroft after he ended his engagement to Rycroft. Mesnick and Malaney famously wed on a TV special called "The Bachelor: Jason and Molly's Wedding" in March 2010. They welcomed their first child together in 2013 and are still together.

"The Bachelorette" (Season 5): Jillian Harris and Ed Swiderski were engaged for a little over a year before breaking up in July 2010.

"The Bachelor" (Season 14): Jake Pavelka proposed to Vienna Girardi at the end of his season, but the couple called off their engagement just a few months later.

"The Bachelorette" (Season 6): Ali Fedotowsky and Roberto Martinez were engaged for 15 months before ending their relationship in November 2011.

"The Bachelor" (Season 15): Brad Womack was given another shot at love after ending Season 11 without a woman. He proposed to Emily Maynard during the show's finale after the couple had broken up during their season. They were engaged for just a few months before breaking up in May 2011.

"The Bachelorette" (Season 7): Ashley Hebert and J.P. Rosenbaum got engaged on the finale of their season and married over a year later in a televised wedding. They share two children together and are still together.

"The Bachelor" (Season 16): Ben Flajnik and Courtney Robertson broke up while their season was airing, but resumed their engagement for another six months or so before ending things for good in October of 2012.

"The Bachelorette" (Season 8): Emily Maynard and Jef Holm were engaged for about six months before going their separate ways.

"The Bachelor" (Season 17): Sean Lowe proposed to Catherine Giudici in the finale of his season, and they got married in January of 2014. They have one child together, Samuel, who was born in July 2016. They're still married.

"The Bachelorette" (Season 9): Desiree Hartsock and Chris Siegfried got married two years after their season wrapped in January 2015. They share one child together and are still married.

"The Bachelor" (Season 18): Controversial Bachelor Juan Pablo Galavis didn't propose to Nikki Ferrell, but they dated for over half a year before breaking up in October 2014.

"The Bachelorette" (Season 10): Andi Dorfman and Josh Murray ended their engagement about half a year after their got engaged. Murray would later be engaged to Amanda Standon from Season 20 of "The Bachelor," who he met on "Bachelor In Paradise" Season 3, but they broke up just six months later.

"The Bachelor" (Season 19): Chris Soules and Whitney Bischoff ended their engagement less than three months after the finale of Soules' season.

"The Bachelorette" (Season 11): Kaitlyn Bristowe and Shawn Booth got engaged in the season finale of their season in the summer of 2015, and they're still engaged and living together in Nashville.

"The Bachelor" (Season 20): Ben Higgins and Lauren Bushnell enjoyed a little over a year of being engaged, before announcing their split in May 2017. They had starred on "Ben & Lauren: Happily Ever After" together in the fall of 2016.

"The Bachelorette" (Season 12): JoJo Fletcher and Jordan Rodgers got engaged on the season finale of their season in the summer of 2016. They're still together and living in Dallas.

"The Bachelor" (Season 21): Nick Viall proposed to Vanessa Grimaldi on the finale of his season and broke up nearly 5 months later.

"The Bachelor" (Season 22): Arie Luyendyk Jr. proposed to Becca Kufrin on the finale of his season, but it was revealed that they broke up during filming and during that time, Luyendyk had gotten back together with runner-up Lauren Burnham. They got engaged on the After The Final Rose special and married in January 2018. They're expecting their first child together this year.

"The Bacheloetter" (Season 14): Becca Kufrin accepted a proposal to Garrett Yrigoyen on the season finale. The couple is still engaged.

In contrast, sources speaking to People seemingly indicate that genital contact may not have been consensual: "The show absolutely values the primacy of consent, and this instance it appears as though conduct allegedly occurred without the proper consent having been given."

The following day, Kaufman confirmed, "a producer who witnessed this hook-up did not show up to work." The same producer then filed a "third-party complaint" alleging workplace misconduct.

All of the "Bachelor in Paradise" participants, who are past competitors from various seasons of "The Bachelor" and "The Bachelorette," have reportedly been sent home. Fans reported seeing cast members in a Texas airport looking in good spirits.

Corinne Olympios on Instagram
🌽
You guys know working out is one of my favorite things to do! With being so busy, I'm not always on track with what I eat. Although I'm not trying to lose weight, @teamiblends tea helps me see results so much more, even while not eating my best. 😊🌱🌮💥 Use CORN for 15% off your order! ♥️ #thankyouteami
Flaws make you flawless 💘
I gave a fuck once, it was terrible. 😇
Just touched down in Toronto! 🙌🏼 After all this craziness I Gotta get back at it 💥 working out is one of my favorite things to do, ever! Its my stress reliever and helps clear my mind! With all this traveling It's been so hard to keep up but I decided I need to find the time no matter what! Sometimes putting yourself first is ok 👌🏻😌💪🏽🍑 #loveyourself #teamcorn
K, Don't even try sitting with us. 🐤🐣🐥
Deserted 🌶
❤️🌻🎡 @diffeyewear
Almost desert bound 😎 code TEAMCORN for 25% off #DIFFInTheDesert #DIFFEyewear
Car rides are lame... :/
Ootd ..If you don’t use @lyonandpost, you're crazy. You can order clothes online & try them on BEFORE paying. You're only charged for what you keep 😽#farewellfittingrooms #lyonandpost
Always have champagne while shopping ... it's a rule! 👙🥂🍾 #cornchella #teamcorn #kiniseason
When bae slays your hair ... again 😍💇🏼💛 @thefashionisa @igksalons
⛓⛓⛓
Missing the Cun ☹️ #tbt
Up Next