Bill Maher addresses N-word controversy as Ice Cube 'schools' him on white privilege: 'I did a bad thing' 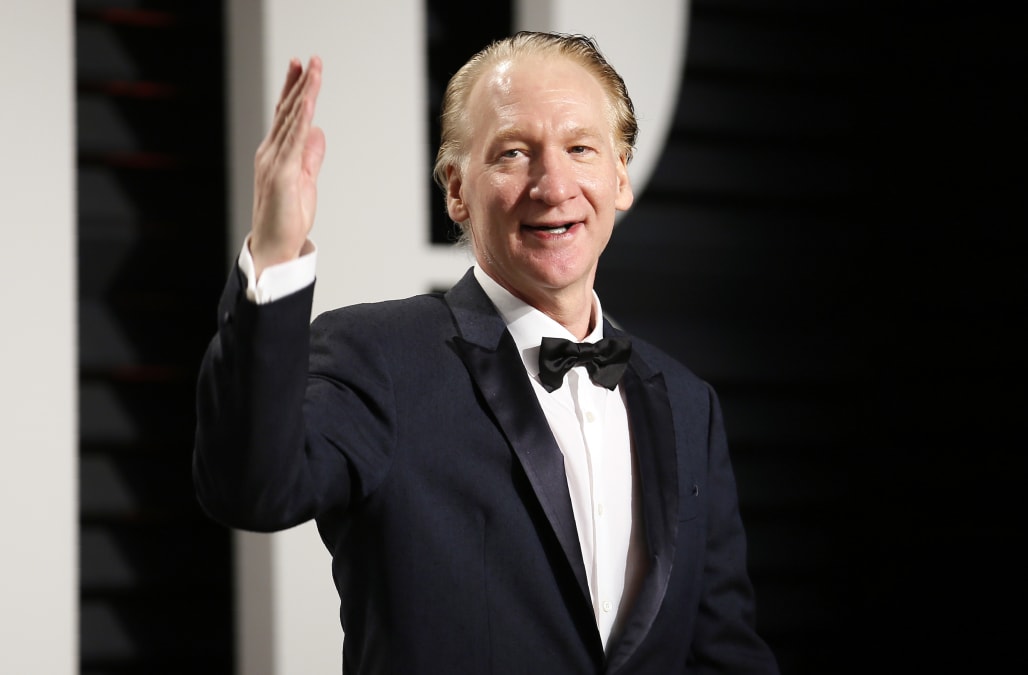 Bill Maher says his use of the N-word was "just a mistake."

The 61-year-old comedian invited Georgetown professor Michael Eric Dyson, who covers race, politics religion and culture for The New York Times, to Friday's episode of Real Time, where he asked Dyson to "school" him.

"I did a bad thing," Maher admitted.

13 PHOTOS
Bill Maher out and about
See Gallery

"For black folks, that word, I don't care who you are, has caused pain," he continued. "It doesn't matter that it wasn't said in malice, if it brought back pain to people, and that's why I apologized freely and I reiterate it tonight. That's sincere. I'm not that big of an a**hole."

On last Friday's episode of Real Time, Maher called himself a "house n*****" during a conversation with Nebraska senator Ben Sasse.

"Now, the guy who was here, it's not his fault. I feel bad about him, the senator, it's all on me," Maher said on this week's episode. "But he said a weird thing, a comic mind goes to a weird place sometimes."

"I'm not here to make excuses," he later said. "But first of all, the word is omnipresent in the culture, so the fact that it was in my mind is, you know...I just don't want to pretend this is more of a race thing than a comedian thing. Comedians are a special kind of monkey, so to speak. We are a trained thing that tries to get a laugh, that's what we do, that's all we are always thinking...and sometimes we transgress a sensitivity point."

Reactions to Bill Maher using the N-word
As a Field Nigga, soon as @BillMaher walks out the house let him know I want the fade!!✊🏿✊🏿 🙌🏾 💪🏾🖕🏿 LOL
Please @HBO Do Not Air Another Episode Of Real Time With Bill Maher.
Racism is not historical fiction. It is still alive and well and a horror.
Do not say it is a word. The reality is we still see racist crimes everyday. A black man was just murdered by a racist w/a sword in NY. No!
Am walking off a redeye from LAX. 3 reflections on @billmaher 1. I’m a 1st Amendment absolutist. Comedians get latitude to cross hard lines.
2. But free speech comes with a responsibility to speak up when folks use that word. Me just cringing last night wa… https://t.co/x6t460BqRv
3. Here’s what I wish I’d been quick enough to say in the moment: “Hold up, why would you think it’s OK to use that… https://t.co/dq74b2YzsN
(4of4) "...The history of the n-word is an attack on universal human dignity. It’s therefore an attack on the Ameri… https://t.co/wciCKhjGVN
Tiger Woods: Watch me destroy my "career"... Kathy Griffin: Here Tiger, hold my beer.. Bill Maher: Damn Amateurs… https://t.co/8Fp5OEwWqR
Bill Maher must be fired immediately for his racism and belittling the struggle of millions of black Americans
Bill Maher is that white dude in high school that thinks he got his honorary black card because he fist bumps black ppl all the time.
if you excuse bill maher's racism and islamophobia because he rips trump regularly, you're not any better than hannity shilling for trump
Some people are just now realizing how racist Bill Maher is? https://t.co/9gI1pSh9DK
Kathy Griffin, now Bill Maher ! wow the left are eating themselves. TRUMP has them rattled!! #MAGA
Up Next

Maher also called his word choice "just a mistake" and a "dumb interception."

Later in the show, Maher welcomed Ice Cube to the panel, who accepted Maher's apology.

"I still think we need to get to the root of the psyche, because I think there are a lot of guys out there who cross the line because they [are] a little too familiar... or is guys who had a black girlfriend or two that made them some Kool-Aid now and then think they can cross the line, and they can't," the rapper expressed.

"[The racial slur is] like a knife. You can use it as a weapon or you can use it as a tool. It's been used as a weapon against us by white people, and we're not gonna let that happen again by nobody, because it's not cool," Ice Cube continued. "It's in the lexicon, everybody talk it, but it's our word now. You can't have it back."

"When I hear my homies say it, it don't feel like venom," the rapper explained. "When I hear a white person say it, it feels like that knife stabbing me, even if they don't mean it."

WATCH: Kathy Griffin Responds With Tears When Asked If She's Spoken to Anderson Cooper After Being Fired From CNN

More from ET Online:
'Orange Is the New Black' Refresher: Everything You Need to Know Ahead of Season 5!
Prince William Looks Regal While Rehearsing for Trooping the Colour Parade – See the Pics!
Bill Cosby's Wife Camille Shows Up to Court for First Time as Defense Begins Presenting Their Case