Here's what really happens at Lightning in a Bottle, an underground music festival built by its attendees 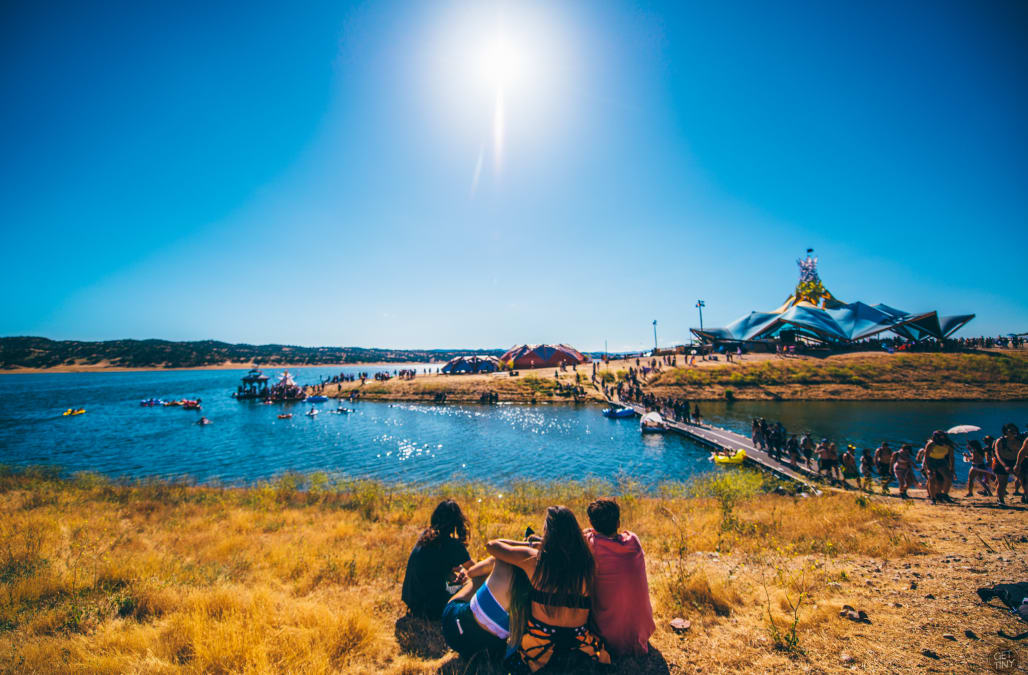 At the Lightning in a Bottle Arts and Music Festival in Bradley, California, it's no coincidence that "arts" comes before "music" in the festival's title. While the big-font lineup names undoubtedly attract many of the event's younger, thrill-seeking newcomers to Lake San Antonio over Memorial Day weekend, the festival's organizers (LA-based artist collective The Do LaB) hope that its immersive art experiences will keep people coming back.

While it's easy to plan every second of your itinerary at most concert-centric festivals, LIB features a wealth of activities that makes it more fun to simply catch your favorites and use the rest of your time to wander around into the grounds' endless nooks and crannies.

Lightning in a Bottle Festival 2017
Up Next

Despite this marking the event's third year at Lake San Antonio (and 19th year overall), this was the first edition in which that vast reservoir was actually put to use, thanks to the state's unusually rainy winter. People eagerly took advantage of that each sweltering afternoon, populating the cozy bays between the landscape's string of picturesque peninsulas with scores of inflatables to add another welcome dimension to an event that's already packed to the brim with content.

The newly conceived Compass area was home to constant workshops and speeches about subjects ranging from "long-term sacred relationships" to tea tasting and virtual reality's role in protecting the environment.

A makeshift "hotel" functioned as a sort of choose your own adventure maze with secret rooms and actors in haunting makeup who did all they could to weird out uneasy guests.

Even the music portion of the festival was largely shaped by immersive artistic expression, as the Do LaB's unique, cutting-edge stage design aims to envelop its attendees in the belly of performances. They don't employ any outside sources to bring in the nondescript white tents that typically cover the festival circuit. Instead, Do LaB pays artists to build open-air structures that mostly rely on custom-made beams and tension cables.

The Pagoda Bar, for example, featured a circular base that swirled up into a majestic, 76-foot tall point that towered over the festival grounds. Speakers were placed around the edges to deliver top-notch sound dynamics to every inch of the stage, establishing an underground vibe by de-emphasizing the location of the DJ. 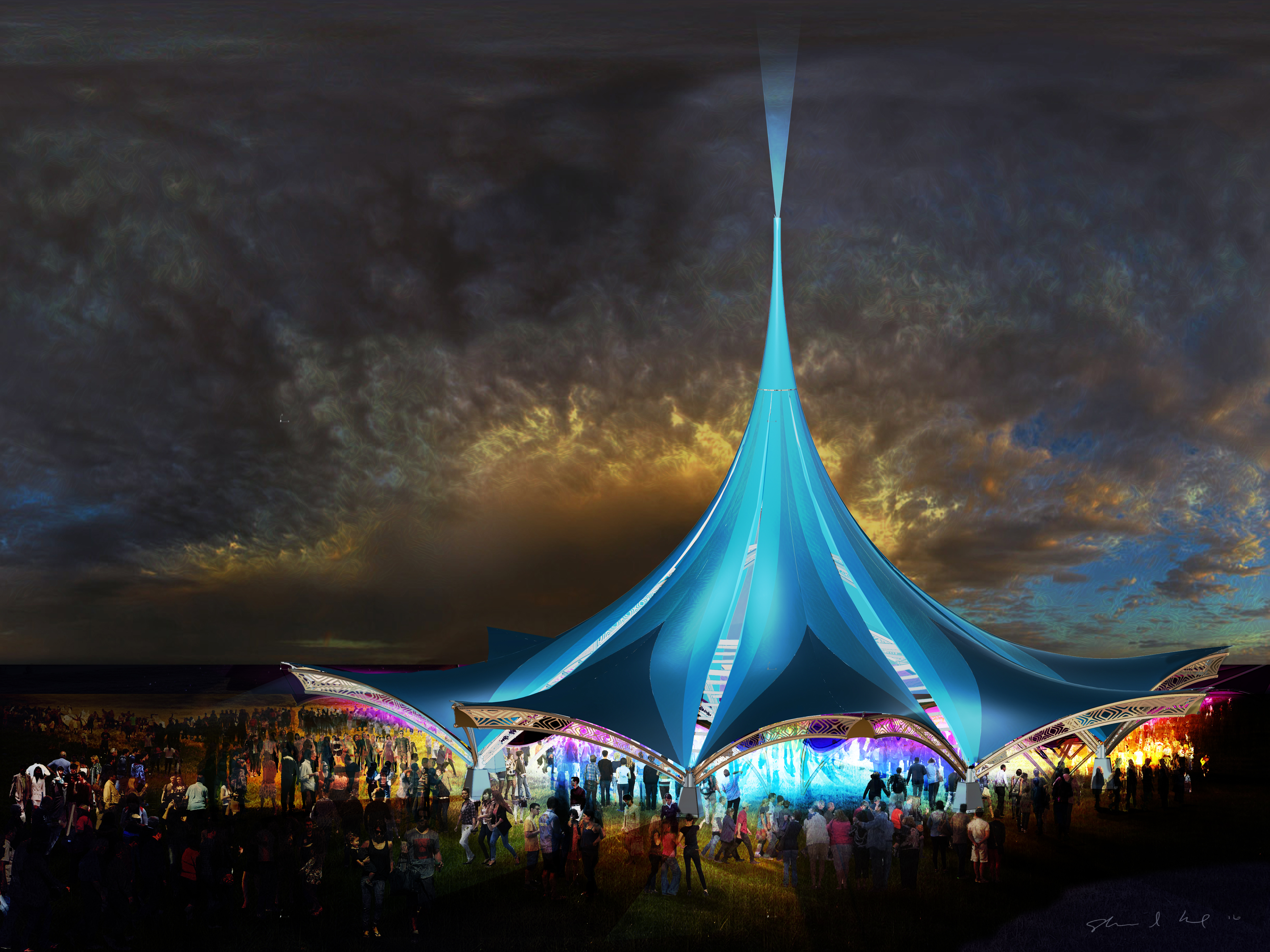 Credit: Lightning in a Bottle

"What the Do LaB is pioneers of is creating experiences through architecture," said stage designer Elliot Dunwoody. "[It's about] creating environmental design that in itself is more than what you can do with lights and video while creating a container for a super wild and slightly debaucherous [sic] experience."

That approach largely ensured that every guest had an enticing view of the shows -- and there were plenty of world-class musicians to see and listen to this year.

The defining sounds of LIB

While the latter three performers churned out uptempo numbers that kept the crowd in a state of euphoric bliss, Bonobo mostly sustained a low-key vibe as the festival wound down on Sunday night. But that turned out to just be a warm up for a second surprise set a few hours later at the Pagoda Bar, where the British import weaved dance tunes into his own biggest hits until well past 4 a.m. When he mixed in a drawn-out remix of The Talking Heads' "Once in a Lifetime," most of the last-gasp partiers couldn't help but grin and sing along even though many of them weren't alive when the track was released in 1980.

The Thunder stage pumped out vicious drops for the community's bassheads all weekend long, while techno and deep house emanated from the usually jam-packed Woogie stage.

Other highlights included alternative electronic duo Bob Moses, who delivered a rousing set Saturday night that ramped up the urgency of many of their low-tempo tracks, and Colombian electro-tropical outfit Bomba Estéreo, who showcased why their band name is slang in their country for "a really cool, awesome, badass party."

'We're not trying to throw a party here'

That's a pretty apt description for LIB, too, though it's transformed into much more since its three co-founding brothers started it in 1999 as a 150-person birthday celebration in a remote Southern California forest. And they haven't disengaged one bit in the years since, epitomizing the hands-on effort put on by each creative involved.

Josh Flemming, twin of Jesse, oversees most of the stage design. The youngest of the trio, Dede, broke his arm while hauling cable poles during the festival setup.

Most executives for festivals on the same level don't tend to do manual labor, but it's a core aspect of this hippie-like community, which takes pride in putting on a relentlessly positive production that can feel like a second home for people of all ages. Some devotees grew up in the scene, camping out as kids with their parents in the early days before maturing into the twentysomethings who comprise the largest portion of attendees.

"We're not trying to throw a party here; we're trying to create a community and a movement. You can't do that without the next generation being involved," Dede said. "It changes the vibe of everything. If you're at a 21-and-over event, you're just like 'all right, shit show, let's go crazy and party.' But when you see kids next to you, you're like 'all right, let's treat this a little differently.'"

That sentiment is largely reflected by LIB's guests. One could go all weekend without seeing exposed genitalia -- something you could never get away with at Burning Man -- and there was a noticeable lack of hyper-sexualized rave attire.

Unfortunately, LIB is not immune to the tragedies that tend to strike other age-restricted festivals as they balloon in popularity. A 20-year-old woman died after being transported to a local hospital late Saturday night, marking the event's first-ever casualty (the cause of death has yet to be released).

The Do LaB's decision-makers, however, seem less concerned about escalating profits than maintaining the tight-knit, friendly feel of its flagpole event.

"When we come together in an environment that's steeped in creativity and in openness, there's something about these experiences that opens us up in our heart space," said senior Do LaB producer Marcie Clark. "We all want to be seen and valued for who we are. To be in an environment that allows for that feels so nourishing, and is priceless in some ways."

Even the most devoted LIB-ers admit to leaving the festival running on fumes with their voices raspy and their bodies feeling spent and sunburnt. But many also depart having discovered a renewed outlook on life. You can bet a large chunk of the estimated 25,000 people who flooded the banks of Lake San Antonio won't hesitate to return next year and assume their place in this vibrant community all over again.