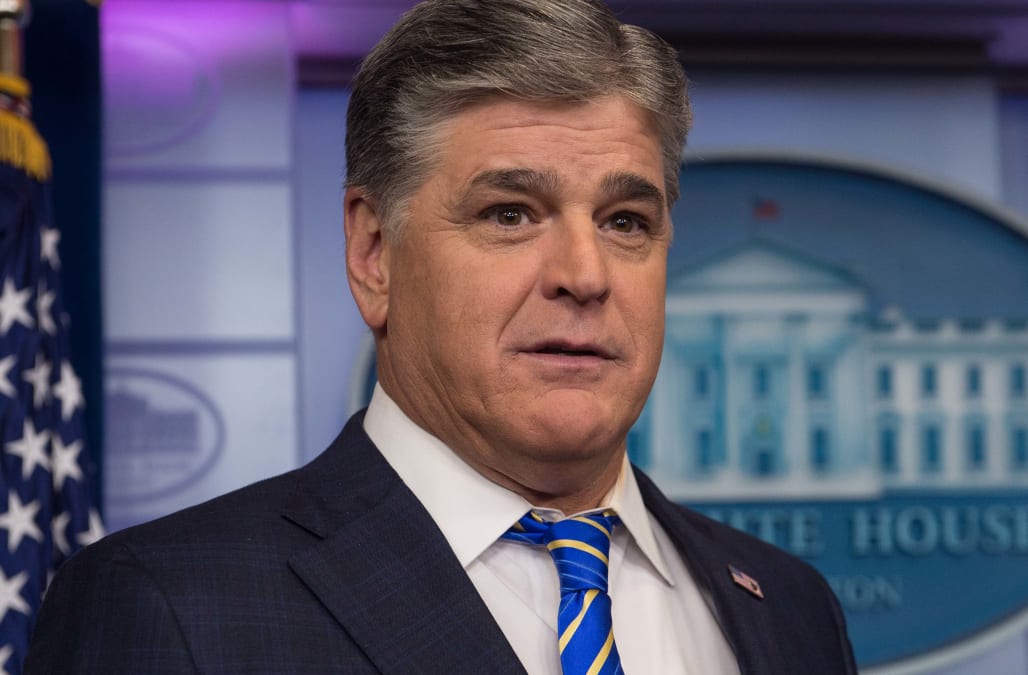 Sean Hannity has been one of Fox News Channel's most popular personalities, throwing red meat daily to the cable network's core red-state viewers by talking up issues of interest to conservatives. If he were to leave, the network would likely get the blues.

Hannity is no stranger to controversy – he has sparred with former colleague Megyn Kelly and CNN media reporter Brian Stelter, to name a few – but he is at the center of a new one that has sparked a few defections from his show by a handful of advertisers as well as speculation over whether he might return from a Memorial Day weekend vacation that began after his broadcast last night.

"Like the rest of the country, Sean Hannity is taking a vacation for Memorial Day weekend and will be back on Tuesday," the 21st Century Fox-owned network said in a statement Friday. "Those who suggest otherwise are going to look foolish." Hannity used Twitter last night to weight in on the issue: "Uh oh My ANNUAL Memorial Day long weekend starts NOW," he wrote. "Destroy Trump/Conservative media breathless coverage starts! Did Hannity do last show?"

At issue is a furor that started to swirl around Hannity's recent promotion of a conspiracy theory about the death last summer of Seth Rich, a DNC staffer who was murdered in Washington, D.C. last July in what local police have stated they believe is a botched robbery. Hannity has in recent days promoted an unproven notion that Rich was killed in exchange for providing internal documents to Wikileaks, prompting statements of outrage from the Rich family.

On Tuesday, Fox News said it had retracted a story, published on FoxNews.com, about Rich's murder – believed to mark a rare instance of the news outlet has withdrawing an article in its more than 20-year history. The killing remains unsolved and right-leaning press outlets such as Breitbart and The Drudge Report have in posts and links bolstered the conspiracy. Hannity continued to promote the theory about Rich on his Tuesday radio show, noting that "this issue is so big now that the entire Russia collusion narrative is hanging by a thread."

But on his Fox News broadcast Tuesday night, Hannity appeared to back away from the contretemps. "Out of respect for the family's wishes, for now, I am not discussing the matter at this time," Hannity said. He added that he might come back to it and would continue to keep tabs on the matter.

Hannity has been on Fox News Channel since the parent company launched in 1996. Since Bill O'Reilly, Greta van Susteren and Megyn Kelly have left, he is truly the outlet's last link to its primetime past. The network doesn't want to see that connection broken.

Sean Hannity went on a Twitter tirade earlier this week about the retracted story:

Sean Hannity goes on Twitter rant about Media Matters
Liberal Fascism. Mmfa is targeting my advertisers to silence my voice. They hope to get me fired. Rush, O'Reilly, Beck, Imus, & now me.
Notice MMFA only does this to conservatives. Smear, slander, malice, half truths, purposefully taking things out of… https://t.co/ijOIDqK0Xb
Why do they not go after @nbc hosts or @CNN hosts? Serious questions will now be raised on funding, tax status, and… https://t.co/2TCdBECV6Z
Why didn't they go after HBO Real Time? Colbert? Simple, MMFA only wants to silence conservatives. Who funds them?… https://t.co/v9HdQiXpFZ
https://t.co/dlfvRsFPfR
https://t.co/PKcCSiq8Kr
How much $ total has Soros given to MMFA? https://t.co/ZZfbNW3z2d
https://t.co/40gymvCpqL
https://t.co/hPeE2sSUxR
https://t.co/1KBZadn62j
Thank you to all my irredeemable friends!! Very humbling!! https://t.co/RAd3sWFjC8
This is a big deal. A media outlet that actually investigated the truth when we pointed out an error. Thx… https://t.co/VUgZmTADPV
To all my friends. TODAY, George Soros, & Hillary Clinton supported Mediamatters is targeting all of my advertisers to try and get me fired
Spoke to many advertisers. They are being inundated with Emails to stop advertising on my show. This is Soros/Clint… https://t.co/RSauUJOG0w
Interesting Real Time can make incest so called "jokes" about Ivanka and Colbert can make vile comments about @POTUS @MMFA SILENT #Hypocracy
Up Next

Losing Hannity would only add to a series of challenges now in front of Fox News Channel, which has parted ways with a passel of senior executives and popular anchors in recent months. The departure of former chief Roger Ailes in the wake of a probe into sexual-harassment allegations leveled at him by former Fox News anchor Gretchen Carlson has set off a series of dominoes that has resulted in a new set of senior staffers and a new primetime lineup at Fox News. Bill Shine, the longtime producer who has risen through the ranks to become co-president, has also left. Keeping Hannity on at 10 p.m. would help the network keep some consistency with its viewers.

Hannity has enjoyed a viewership surge in recent months. Year to date as of May 23, his audience among people between 25 and 54 – the demographic most coveted by advertisers – hiked 41%, according to Nielsen. Overall viewership has risen 38% during that period – likely in part due to his enthusiastic backing of President Donald Trump.

He has also seen an uptick in advertiser interest. In 2016, his "Hannity" brought in approximately $65.7 million, according to Kantar Media, a tracker of ad spending. That represented a 17% jump from the approximately $56.1 million the show captured from Madison Avenue in 2015.

Cars.com, USAA, and a handful of other sponsors have said they will not advertise on Hannity's show in the wake of the controversy. "USAA advertises on news programs, but advertising on opinion shows is not in accordance with our policy," the financial-services company said in a statement on Twitter. One big advertiser, Mercedes-Benz USA, told Buzzfeed in a statement that the company's "rule of thumb is that we do not pull our ads based on editorial content. Our feeling is that a variety of viewpoints is part of the natural discourse that takes place in a free media." The automaker was among the first to announce its decision to yank ads from Bill O'Reilly's program. A company spokesperson did not respond to a query seeking further comment.

Conservatives have pushed back against the pressure placed on Hannity, citing concerns about free speech. "The attack on Sean Hannity is a part of the liberal strategy to re-establish their monopoly over television news," said Brent Bozell, president of the Media Research Center, an organization that looks for what it says is liberal bias in media. "They want only one voice on the air: their own. All others must be silenced."

Hannity has emerged from other imbroglios intact. More of this current drama is likely to play out next week when he is expected to return to the air.

Sean Hannity's tweets following Roger Ailes' death
Today America lost one of its great patriotic warriors. Roger Ailes. For Decades RA's has impacted American politics and media.
He has dramatically and forever changed the political and the media landscape singlehandedly for the better. https://t.co/nZssNxFKAr
Neither will ever be the same again as he was a true American original. Few people in this life will ever reach th… https://t.co/Nfod7UxJQQ
impact that Roger Ailes had on the country every single day. As his opponents played checkers in life, Roger was al… https://t.co/OHbx3xsZ0u
playing Chess, 5 steps ahead at a whole other level On a personal note, were it not for Roger Ailes, I would not b… https://t.co/jXGg3IEyqE
In 1996 he took a huge risk on an inexperienced, young, local radio talk show host in Atlanta. To this day I have n… https://t.co/9cU55ygv1e
I was hired and not fired early on, as I had little television experience when I was hired by FNC, as old tapes hu… https://t.co/Z138hNbF81
He saw something in me and many others he hired that we never saw in ourselves, and he forever changed the trajecto… https://t.co/xNTdxQuBpK
of thousands of peoples lives. https://t.co/jImCDFng5n
In many ways he was like a second father after I lost my father 6 months after I started at FNC in 3/97. I am forev… https://t.co/mu2sWh7fo9
His endless enthusiasm, energy, wit, humor and raw instinctive intelligence will be greatly missed. https://t.co/d4Qafc8Wx3
Our thoughts and prayers now turn to him, his Wife Beth, his son Zachary, his brother and his family. He will be de… https://t.co/qzHv6dvLYm
It would be nice if the media would leave Roger and his family alone in their time of grief, but knowing people tha… https://t.co/lR4l9IJvex
and his politics, and those that forget "all have sinned and fallen short" and "cast the first stone" I doubt that… https://t.co/3LMSEHBGPN
But to his enemies know this; I say ADVANTAGE ROGER, In his mind he just has a head start in preparing to kick your… https://t.co/8BRghfqbcQ
God speed Roger Ailes! https://t.co/dBeXEZQCv0
Up Next