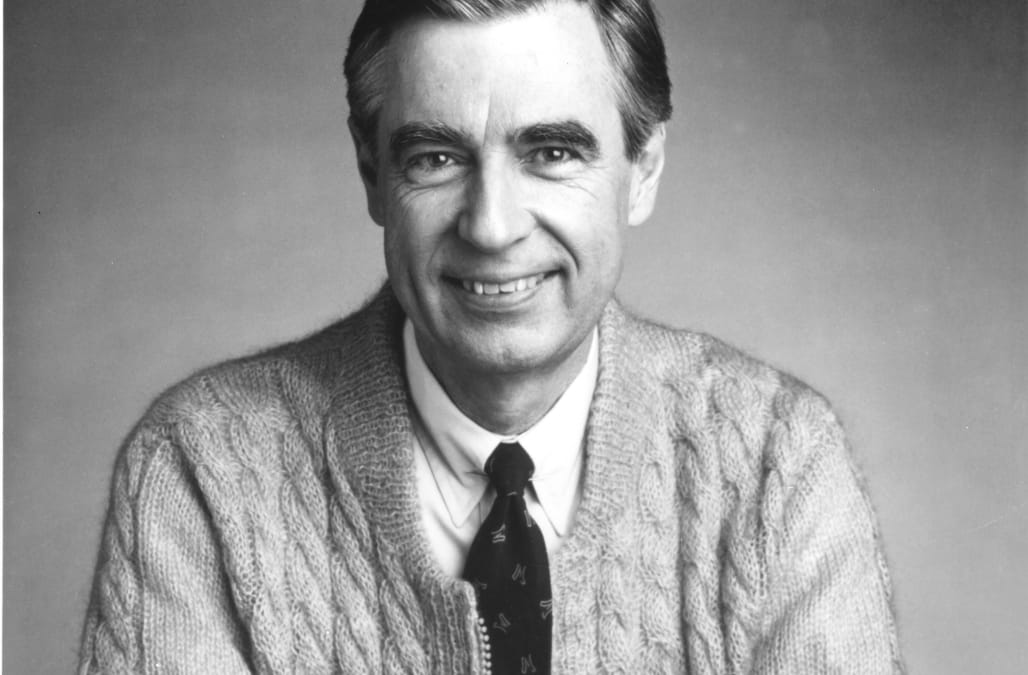 A lot of people are sharing this quote after the heartbreak in Manchester. It's also the 50th anniversary of Mr. Roger's Neighborhood. 1/ pic.twitter.com/zDnTrTcJ8v

After seeing a quote by Rogers circulating on social media (see above) following the deadly Manchester bombing, one man recalled on Monday night a story in a lengthy Twitter spree of how the beloved Mister Rogers saved him from himself.

Just a forewarning ... you're going to need tissues for this one.

"Fred Rogers was from Pittsburgh, my hometown, and my generation grew up loving this man, who taught us to be kind above all," Anthony Breznican, a writer, began.

Writer shares touching story about Mr. Rogers
A lot of people are sharing this quote after the heartbreak in Manchester. It's also the 50th anniversary of Mr. Ro… https://t.co/Fd2yV8u93m
Fred Rogers was from Pittsburgh, my hometown, and my generation grew up loving this man, who taught us to be kind above all. 2/
Fred Rogers was the real thing. That gentle soul? It was no act. 3/
As I got older, I lost touch with the show, which kept running through 2001. But in college, one day, I rediscovered it... 4/
I was having a hard time. The future seemed dark. I was struggling, lonely, dealing with a lot of broken pieces and not adjusting well. 5/
I went to Pitt and devoted everything I had to the school paper, hoping that would propel me into some kind of worthwhile future. 6/
It was easy to feel hopeless. One span was especially bad. Walking out of the dorm, I heard familiar music: 🎶Won't you be my neighbor... 7/
The TV was playing in an empty common room. Mr. Rogers as there, asking me what I do with the mad I feel. (I had lots to spare. still do) 8/
It feels silly to say - it felt silly then - but I stood mesmerized. His show felt like a cool hand on a hot head. I left feeling better. 9/
Days later, I get in the elevator at the paper to ride down to the lobby. The doors open. Mr. Rogers is standing there. For real. 10/
I can't believe it. I get in and he nods at me. I do back. I think he could sense a geek-out coming. But I kept it together. 11/
Almost. 12/
The doors open, he lets me go out first. I go, but turn around. "Mr. Rogers... I don't mean to bother you. But I wanted to say thanks." 13/
He smiles, but this has to happen to him every 10 feet. "Did you grow up as one of my neighbors?" I felt like crying. Yeah. I was. 14/
Opens his arms, lifting his satchel for a hug. "It's good to see you again neighbor." I got to hug Mr. Rogers, y'all! 15/
I pull it together. We're walking out and I mention liking Johnny Costa (he was the piano player on the show.) We made more small talk. 16/
As he went out the door, I said (in a kind of rambling gush) that I'd stumbled on the show again recently, when I really needed it. 17/
So I just said, "Thanks for that." Mr. Rogers nodded. He paused. He undid his scarf. He motioned to the window, & sat down on the ledge. 18/
This is what set Mr. Rogers apart. No one else would've done this. He goes, "Do you want to tell me what was upsetting you?" 19/
So I sat. I told him my grandfather had just died. He was one of the few good things I had. I felt adrift. Brokenhearted. 20/
I like to think I didn't go on and on, but pretty soon he was telling me about his grandfather & a boat the old man bought him as a kid. 21/
Mr. Rogers asked how long ago Pap had died. It was a couple months. His grandfather was obviously gone decades. 22/
He still wished the old man was here. Wished he still had the boat. You'll never stop missing the people you love, Mr. Rogers said. 23/
The grandfather gave Mr. Rogers the row boat as reward for something. I forget what. Grades, or graduation. Something important. 24/
He didn't have either now, but he had that work ethic, that knowledge that the old man encouraged with his gift. 25/
"Those things never go away," Mr. Rogers said. I'm sure my eyes looked like stewed tomatoes. 26/
Mr. Rogers was there for me then. So here's this story, on the 50th anniversary of his show, for anyone who needs him now. 28/
I never saw him again. But that "helper" quote? That's authentic. That's who he was. For real. 29/ https://t.co/VQ6vt6Lr3c
When Mr. Rogers died in 2003, I sat at my computer with tears in my eyes. But I wasn't crying over the death of a celebrity. 30/
I was mourning the loss of a neighbor. 31/end
Up Next

While in college, Anthony rediscovered "Mister Rogers' Neighborhood" while Rogers' iconic song -- "Won't you be my neighbor ..." -- blasted from a television in an empty room while he was walking out of his dorm. It couldn't have come at a better time:

"The future seemed dark. I was struggling, lonely, dealing with a lot of broken pieces and not adjusting well."

He said he left feeling a lot better after seeing the show and Rogers' familiar face.

Days later, he ran into Mister Rogers in an elevator. It was fate.

"The doors open. Mr. Rogers is standing there," Breznican wrote. "I can't believe it. I get in and he nods at me. I do back. I think he could sense a geek-out coming. But I kept it together."

And while the story could've ended right there, with Anthony and Rogers going their separate ways after getting off the elevator -- it didn't. It turned into a tear-jerking, incredible conversation between the two. Read the rest of Anthony's story in the slideshow above.

Rogers passed away in 2003 at the age 74, just two years after his show ended its 33-year run. While Mr. Rogers is no longer with us, his legacy lives on.

"When Mr. Rogers died in 2003, I sat at my computer with tears in my eyes. But I wasn't crying over the death of a celebrity." Anthony ended his Twitter story. "I was mourning the loss of a neighbor."

Stars react to Manchester bombing
wishing I could give my friend @arianagrande a great big hug right now... love love love you .... so sorry you had to be apart of such a tragic event! my most sincere condolences to anyone and everyone affected by this horrific attack! all I can do is send as much HOPE & PEACE your way! This MUST end! No more war .... no more innocent lives taken .... L-O-V-E 💙❤️💜💚💛 @happyhippiefdn
broken. from the bottom of my heart, i am so so sorry. i don't have words.
Praying for the beautiful souls we lost, their families and loved ones, for the survivors who will forever be impacted by this #Manchester
#Manchester has always been so close to my heart! These are innocent vulnerable kids, this could've been any of us! I'm devastated!
I can't imagine the fear and agony these parents must be going through searching for their kids 💔
Up early & ready about what happened in Manchester. This is truly so senseless & heart breaking. My heart goes out to everyone involved
So heartbroken to hear of the nightmare that came true last night in Manchester. Sending love light and prayers to everyone affected.
Can't stop thinking about the joy of going to your 1st concert. Bravery & hope. All violence is tragic. This is impossible to shake.
God bless everyone who was at Ariana's concert! My prayers are with you all and poor sweet Ariana! This is heartbreaking 💔
My thoughts, prayers and tears for all those affected by the Manchester tragedy tonight. I'm sending all my love.
MY PRAYERS GO OUT TO PPL OF MANCHESTER…HAD SPECIAL TIMES THERE FROM YOUTH & BEYOND
I'm heartbroken over what happened in Manchester tonight. Sending love to everyone involved. H
Absolutely Horrendous what happened in Manchester tonight. My thoughts are with the great people of Manchester and also Ari and her team xx
To see what has happened in Manchester makes me really sad. My thoughts are with those that are experiencing such tragedy at this time x
Sending prayers to the people of Manchester. I'm heartbroken for the lives lost and all the families suffering right now
My heartfelt thoughts and prayers for all those effected by the tragedy in Manchester last night 🙏🏻 x VB… https://t.co/OLkb5elWtN
Heartbreaking news from Manchester. As a father & a human what has happened truly saddens me. My thoughts are with all of those that have been affected by this tragedy...
My thoughts and prayers are with the people of Manchester, any one affected, @ArianaGrande and the entire crew. Heartbreaking
Just woken up and seen the news. My heart and soul is broken for every single victim, and their families and friends. So painfully sad x
Wow wow wow I'm in disbelief. all of my prayers to Manchester.
The Rolling Stones are deeply shocked to hear of the appalling events in Manchester & send condolences to everyone affected by this tragedy.
My thoughts and prayers are with everyone effected by this horrible attack in Manchester. My heart is broken this morning.
My heart hurts for my sister, Ariana & every family affected by this tragic event in the U.K. Innocent lives lost. I'm so sorry to hear this
No words can describe how I feel about what happened in Manchester. I don't wanna believe that the world we live in could be so cruel.
Just saw the news about Manchester... Our hearts are breaking 💔 Prayers for all who attended, their families, Ari and her whole crew.
Praying for everyone at @ArianaGrande's show
My prayers are with you Manchester
Tearing up imagining innocent concert goers losing their lives.. praying for everyone and all #arianators. 🙏🏼🙏🏼🙏🏼
💔Absolutely sickened & angered by this senseless, evil attack. Thoughts are with everybody effected. Such a disturbing time we live in 😔
I am truly so sorry about what has happened in Manchester tonight. Unthinkable events. All my love to the families affected.
My heart breaks for everyone who endured the terrifying attack at Ariana Grande's show in Manchester. I'm praying for everyone there...
Please God may those injured in Manchester recover and my heart is breaking for the families of those killed.
Sending love to those affected in Manchester.
Hoping we can all push to create a world where this isn't a reality, prayers to #Manchester
oh god.......my heart is breaking hearing about this tragedy that happened at Manchester arena tonight...
We're on tour a half mile away from explosion but SAFE! Insane world. Grab all the peace and love you can. Praying now. #Manchester
Up Next