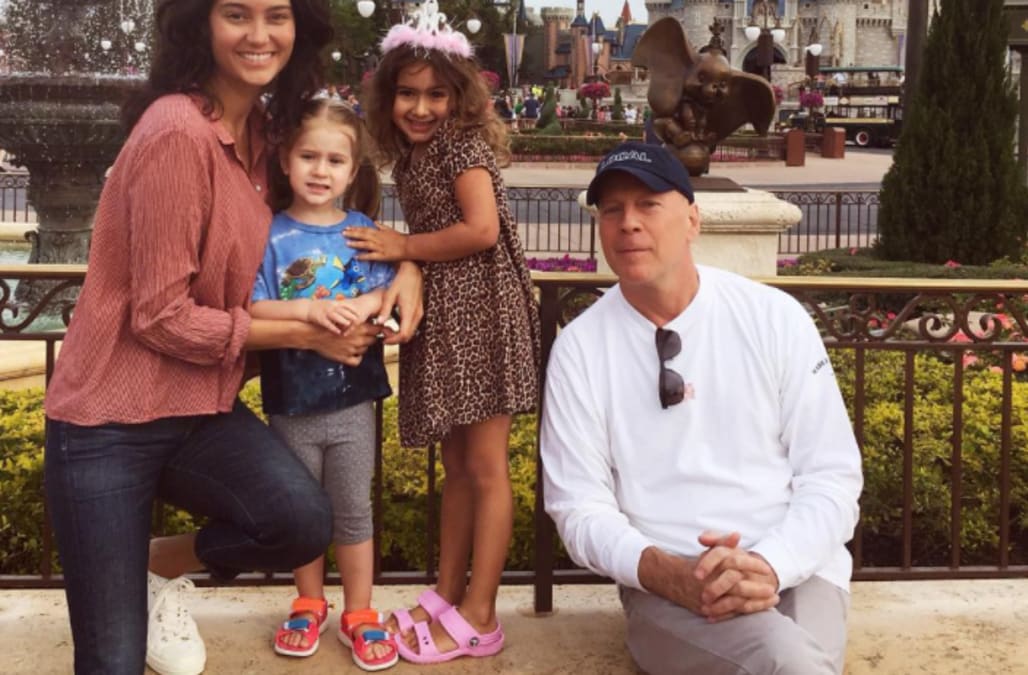 There's no shortage of estrogen in Bruce Willis' life!

Emma Heming Willis recently opened up about raising young daughters -- Mabel, 5, and Evelyn, 2 -- alongside her Golden Globe-winning husband. The devoted parents took a night off to attend the annual spring fundraiser for Room to Grow, a nonprofit benefiting babies born into poverty. Emma, an ambassador for the organization, co-chaired this year's April 5 event.

Bruce worked nonstop for three decades in Hollywood, racking up starring roles in dozens of blockbuster hits. Now 62, he lives on the East Coast and stays mostly out of the spotlight, choosing instead to hang with his family: "He's totally a hands-on guy!" Emma told AOL Entertainment of Bruce, who she married in 2009. "He's a fun dad."

We planned a pretty last minute trip to Disney World and it was epic! Last year I did a post on how to survive a theme park with kids, referenced it for this trip and it stood the test of time! Head over to my site for the slightly updated version for some tips and tricks 💯🎢🌠 (link in profile) @waltdisneyworld #springbreak2017 #disneyworld #disneylove #themepark

Bruce and Emma married in a 2009 ceremony on a private Turks & Caicos island. In attendance was ex-wife Demi Moore, with whom he shares three daughters. The exes famously maintained a positive family dynamic after their divorce, and the results of that are monumental: According to Emma, her children are able to enjoy an incredible bond with half-sisters Rumer, Scout and Tallulah Willis.

"The younger ones love having older sisters. It's a really a sweet relationship," Emma told AOL Entertainment. "They FaceTimed Mae the other day for her birthday. We don't get together as much as we'd all like, just because they're on the West Coast and they're on the East Coast, so sometimes our schedules don't match up. But for the most part, we do get to see them often."

In fact, Emma has nothing but compliments for her stepdaughters. "I feel like they have such confidence," she said. "They're very artistic, they're very talented. They're just generally lovely girls, very loving and affectionate, and I love that."

Bruce Willis and Emma Heming Willis with their kids
Daddy's home! 🤗💗 #daddysgirl
As we just checked off our 8 year wedding anniversary (and thank you for all well wishes!) I thought I'd turn to the online experts for tips on how to make a relationship last. Cause that's my goal over here! 💍💘 (link in profile) #relationshipgoals #ontheblog #goodreminders
Launching into 2017... 💙🚀 #HappyNewYear
What a special night to be able to celebrate Mr. Bennett's 90th @radiocitymusichall 90!? We should all be so lucky. #Tony90 #datenight #aboutlastnight P.S. I met Lady Gaga. I died.
Happy #nationalsiblingsday! Yeah they might argue but they sure do love each other 💞#sisterlove #sistersrule 👱🏼‍♀️👱🏼‍♀️👱🏼‍♀️👧🏽👧🏼 #fivesisters @ruelarue @scoutlaruewillis @buuski
We planned a pretty last minute trip to Disney World and it was epic! Last year I did a post on how to survive a theme park with kids, referenced it for this trip and it stood the test of time! Head over to my site for the slightly updated version for some tips and tricks 💯🎢🌠 (link in profile) @waltdisneyworld #springbreak2017 #disneyworld #disneylove #themepark
Here's looking at 10 years that went by in a snap. He's wacky, I'm nuts and I'm so glad I found him ❤️ #loveofmylife #justgettingstarted
Starting 2017 off right and putting our best foot forward with our @roomtogroworg ice pop stand! Thank you @comohotels for your help in making it a success and to everyone that came out to support a great cause! 🍡💙 #buildingstrongstarts #roomtogrow #kidsgivingback
"If you want to know how much I love you, count the waves." Unknown 🌊
Last minute sightseeing on our way to the airport. What a city❣🇮🇹 #memoriesmade
Up Next

Guests of the Room to Grow benefit, which raised more than $550,000, were able to bid on a vacation at the couple's private home in Turkes & Caicos. The lavish prize was just one of the contributions Emma has made to the philanthropy. She even got Mabel and Evelyn involved earlier this year with a lemonade stand fundraiser, which she blogged about on her website.

Their older daughter, Mabel, just turned five -- and she may follow her dad straight into the industry. "She's a very outgoing girl, loves to sing, loves to dance. Her father thinks she's going to be an actor," Emma said -- not sounding totally thrilled with the idea. Asked how she feels about that, she laughed, "I don't know yet...!"

More from AOL.com:
Pierce Brosnan and wife Keely Shaye Smith pack on the PDA on the red carpet
Katie Holmes and Jamie Foxx spotted on a dinner date in NYC -- see the pic!
EXCLUSIVE: Mama June opens up about her current relationship with Sugar Bear: 'He pisses me off'