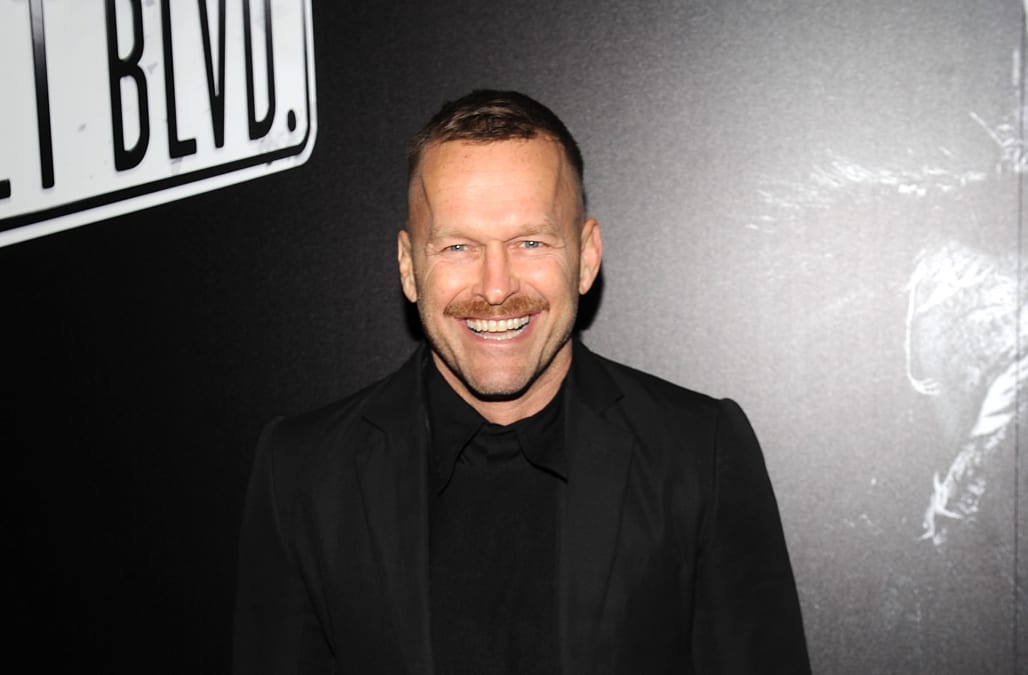 Bob Harper is opening up about his February heart attack.

The "Biggest Loser" host revealed in an emotional interview with "Today" on Tuesday what happened, including how extreme his condition was: "I was in full cardiac arrest. My heart stopped. Not to be dramatic, but I was dead. I was on that ground dead."

Doctors gave Harper, 52, a six percent survival rate -- a "widow-maker" -- and said the reason that he's alive today is because there were doctors in the gym when he had suffered the heart attack.

"My coach went into full damage control and ran out and found two doctors," Harper said. "'They started performing CPR, pulled out the AED (automated external defibrillator) and used that twice. And the paramedics got there super quick and jolted me one more time."

26 PHOTOS
Bob Harper out and about
See Gallery

TV personality Bob Harper poses for a portrait during the NBCUniversal Press Day at The Langham Huntington, Pasadena on January 13, 2016 in Pasadena, California.

Bob Harper of NBCUniversal's 'The Biggest Loser' poses in the Getty Images Portrait Studio at the 2016 Winter Television Critics Association press tour at the Langham Hotel on January 13, 2016 in Pasadena, California.

Later in the interview, Harper broke down into tears while talking about how happy he is to be alive. The fitness guru's near-death tragedy comes at a surprise to most, including himself, considering he's seen as the picture of perfect health for millions of viewers.

"I don't remember that day at all," Harper said. "I was told I went to the gym like I always do and at the end of the workout I went down to the ground, but it wasn't until about a minute or so later that people realized something was going on."

"I was like Dory from 'Finding Nemo' because I had this short-term memory, so I was reliving the heart attack over and over again."

Harper is now on the road to recovery, and he's been heavily documenting it on social media. From snaps of his Mediterranean-inspired vegan diet to breathing machines which monitor him during workouts, fans can get a peak into his journey.

And his life post-heart attack has been everything but easy. Bob confessed that he's been suffering from depression.

The 12 best diets for heart health

According to research from the Nurses' Health Study, on which The Fertility Diet is based, women who consume “good” fats, whole grains and plant protein improve their egg supply, while those who eat “bad” fats, refined carbohydrates and red meat may make fewer eggs and increase the risk for ovulatory infertility. Your heart may benefit from such an approach, too, suggests research finding that replacing animal protein with good carbohydrates might protect against heart attack, stroke or early death from cardiovascular disease and improve artery health and blood flow.

The Anti-Inflammatory Diet, which is based on the heart-healthy principles of the Mediterranean diet, reflects creator Andrew Weil’s belief that certain foods cause or combat systemic inflammation. According to the American Heart Association, inflammation is not a proven cause of cardiovascular disease, but it is common among heart disease patients. Plus, the program emphasizes a steady supply of omega-3 fatty acids, which research suggests protect against heart disease.

Flexitarian is a marriage of two words: flexible and vegetarian. The plan revolves around the idea that you don’t have to eliminate meat completely to reap the health benefits associated with vegetarianism; an occasional burger is OK. One large 2015 study of more than 450,000 Europeans found that those who ate a diet of at least 70 percent plant-based foods had a 20 percent lower risk of dying from cardiovascular disease than those who were least "pro-vegetarian." Earlier research suggests a semi-vegetarian diet also helps promote healthy blood pressure and cholesterol levels. As a bonus, it's good for the environment, one reviewer pointed out.

Experts agree the Mayo Clinic Diet is a sound option for preventing or controlling heart problems. It focuses on coaching dieters to develop healthy, lasting habits around which foods they choose to eat and which to avoid. Plus, it reflects the medical community’s widely accepted definition of a heart-healthy diet: heavy on fruit, veggies and whole grains but light on saturated fat and salt.

A vegetarian diet has the potential to decrease the risk of cardiovascular disease, according to experts, as long as vegetarians don’t load up on full-fat dairy and processed foods. As one expert reminds, "vegetarian diets can be healthy or unhealthy"; the beer-and-popcorn version is the latter. Still, if you take a well-informed approach, a vegetarian plan is a good bet for heart-conscious dieters, especially those who don’t have the heart to eat animals anyway.

This low-fat, “plant strong” diet was created by Rip Esselstyn, a firefighter, former professional athlete and medical scion. It’s thought to prevent and often reverse diseases, like heart disease, caused by the so-called Standard American Diet and should also help keep cholesterol and blood pressure in check. If you adopt the Engine 2 Diet, you’ll load up on fruit, vegetables and whole grains and slash all animal products, processed foods and vegetable oils from your diet.

Veganism earned high marks for its potential to boost cardiovascular health. It emphasizes the right foods – fruit, veggies and whole grains – while steering dieters away from meat, dairy and salty, processed choices. In a 12-year study that compared 6,000 vegetarians with 5,000 meat-eaters, for example, researchers found that the vegans in the group had a 57 percent lower risk of ischemic heart disease than the meat eaters. (The condition involves reduced heart pumping due to coronary artery disease and often leads to heart failure.) Just keep in mind that vegans may need to take supplements to make up for some heart-protective nutrients like the omega-3 fatty acids found in fish.

This plan is a mashup of two other expert-endorsed diets – DASH and Mediterranean – and zeroes in on the foods in each that specifically affect brain health (think green leafy vegetables, nuts, berries, beans, whole grains, fish, poultry, olive oil and wine). Turns out, the heart likes the same foods, studies show. A downfall of the MIND diet: Physical activity, proven important for heart health, is not addressed in the plan, some experts pointed out.

What can’t this eating style do? The Mediterranean diet has been associated with a decreased risk for heart disease, and it’s also been shown to reduce blood pressure and “bad” LDL cholesterol. One 2015 study even showed that Italian vegans, vegetarians and others who followed a mostly Mediterranean diet had more short-chain fatty acids, which are linked to a lower risk of heart disease. Since the approach largely shuns saturated fat (which contributes to high cholesterol) and includes healthier mono- and polyunsaturated fats in moderation (which can reduce cholesterol), you’ll do your heart a favor by following it.

The Therapeutic Lifestyle Changes diet, created by the National Institutes of Health’s National Cholesterol Education Program, claims to lower “bad” LDL cholesterol by 8 to 10 percent in six weeks. Research concurs: In one Journal of Lipid Research study, participants who shifted from a typical American diet to the TLC Diet reduced their LDL cholesterol by 11 percent after 32 days. No matter your aim, the diet is "very healthy and safe for all individuals," one expert said.

The Dietary Approaches to Stop Hypertension program, or DASH, was created to help control high blood pressure – and it works. One expert called it "by far the best with data to back up lowering hypertension." Indeed, extensive research suggests it's one of your best bets if you want to lower your blood pressure as well as improve other markers of cardiovascular health. If you adopt the diet, you’ll emphasize the foods you’ve always been told to eat (fruits, veggies, whole grains, lean protein and low-fat dairy), while shunning those we’ve grown to love (calorie- and fat-laden sweets and red meat).

This rules-heavy plan has ranked No. 1 for heart health for seven consecutive years, although this year it shares the title with the DASH diet. Followers adhere to a strict regimen: Only 10 percent of calories can come from fat, very little of it saturated, and most foods with any cholesterol or refined carbohydrates, oils, excessive caffeine and nearly all animal products are banned. Research suggests the Ornish Diet, combined with stress-management techniques, exercise, social support and smoking cessation, could actually reverse heart disease.