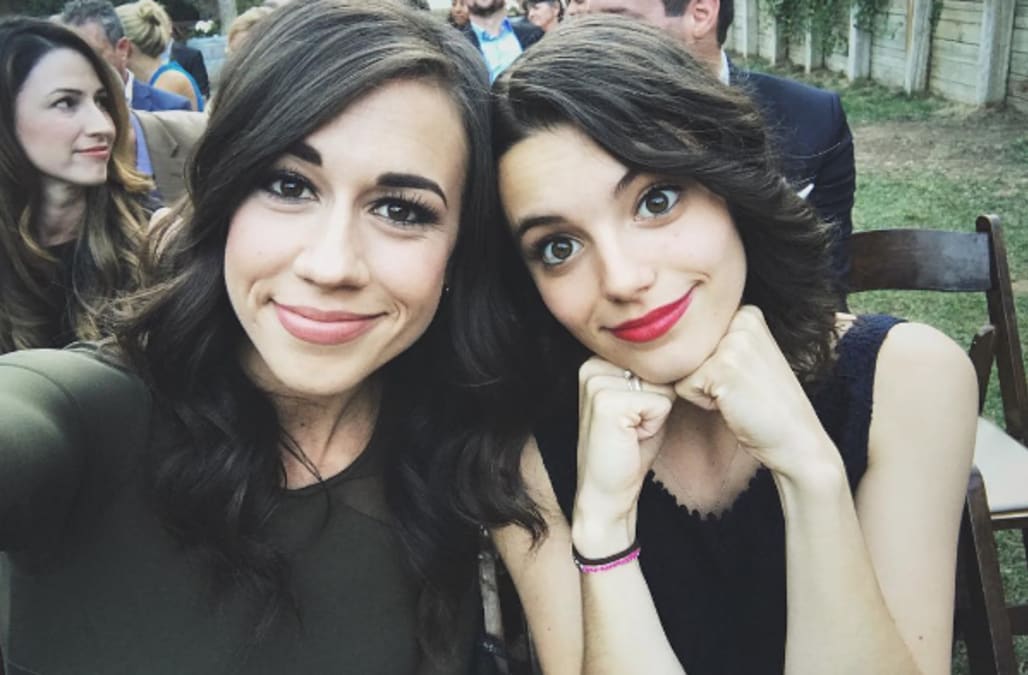 "Haters Back Off" is a Netflix Original series that is one of the first to tackle the life of a social media star.

The show is a comedy that stars comedian and actress Colleen Ballinger, and profiles the fictional life of Ballinger's very own wannabe-YouTube personality Miranda Sings. The show struck a cord with many of Ballinger's fans and beyond, and was just renewed for a second season on Netflix.

The cast features some heavy hitters, like Angela Kinsey from The Office, who plays Ballinger's mom, but it also showcases some promising new on-screen talent -- namely Francesca Reale.

Reale graduated NYU in 2015 with a BFA in acting from the Tisch School of the Arts, and has already managed to make a name for herself as Emily, Ballinger's sister in the show.

Reale knew from a young age that she wanted to act, and felt particularly inspired by Audrey Hepburn. However, to some it may seem like she took a non-traditional route. Reale didn't make her way on-screen until 2016. She stayed focused in school and made sure to solidify her techniques -- and it's clearly paid off.

We had the chance to chat with Reale about her acting inspiration, on-set moments for "Haters Back Off" and more. Check out part one of the interview below!

#YouShouldKnow is a feature that showcases rising talents. To see more past interviews, including more features on Francesca Reale click here.

How did you first get involved with acting?

I first got involved with acting when I started at college, at NYU, and I studied at the Lee Strasberg Theatre and Film Institute. I realized I wanted to get into acting when I was about ten years old. I was watching "Breakfast at Tiffany's" with my mom. I thought to myself, that's cool, I want to do that, but I didn't really dive into it until college.

What made you to want to work on "Haters Back Off"?

I didn't have a ton of the scripts when I started, so I didn't know the storyline very well, but I was intrigued by how strong the female presence was on the show. You have Colleen, who is the star, but she's also the creator and the writer. We have this wonderful woman Gigi who is another executive producer. There's just a really strong female base in the show, so I thought that was very cool -- to be on a show on Netflix that has strong female characters on and off screen. When I actually got the scripts to the show, I thought it was hysterical, but it also had a very real life touch to it. You don't see that in a ton of comedies, it's just slapstick until the end, or the joke goes on forever, but her and her brother wrote it so that it takes a really nice turn -- or not so nice -- but a turn to reality and focuses on the hardships of trying to become a star.

What's been the most challenging part of taking on Emily as a character?

The dryness -- I think. I'm so opposite from her in that I'm not very dry, I'm not subtle at all. I am Italian, so I talk with my hands and everything. The biggest thing they wanted from her was minimalism. Her whole thing is not to be the center of attention. A lot of the time the directors would say 'don't move so much' or 'don't talk with your hands.' So, I really had to work on mannerisms with my body and working really subtly with my face, and doing things I have not done my entire life, because that's not who I am, to try to figure out who she was. I watched a lot of British comedy because they're all very subtle, and their comedy is very dry and still, and I went to an open art exhibit on the street where this guy just stood still. It was hard, but we figured it out.

What other roles led you to this point?

I didn't do a ton, because my mom was very strict with me as a kid about wanting me to have a normal childhood. So, whenever I talked about acting, she said that's okay if I really wanted to do it, but always kept my options open. Both of my parents were very strict on me learning the craft before jumping into work. Most of the 'work' I've done is in a lot of scene study classes. The one I really died over was Harper from "Angels in America." She's just such a complicated character and she's so weirdly in between reality and this limbo world of being consistently high on painkillers that I thought it was just a lovely challenge. It got me into the mindset of me wanting to do more work like it, or performing for more than just my teacher when I do.

What is the filming and creation process like for you and the team when you're creating the show?

It's very fun. I know there are some parts of the show that are very depressing and hit home for a lot of people. But it's never sad or stressful or intimidating on set. Everyone is there to have a good time and create this project and work and art. I love it.

What's a typical day like on set -- either a good day or a difficult day?

A hard day looks like -- I would say it was my last day, no, my last week of shooting. We shot in a way where all of the scenes that were in my bedroom would all be shot in one day, and all of the scenes in front of the house would be shot in one day. So, we did all of the Emily scenes, of her in her garage isolating herself, in one day. That was a hard day. Usually, you'll have a day where you do your scene, and then they move on to one you're not in so you'll go eat or rework your lines and chill for a little bit, and then go back to do a second scene. But then there are days where you're there all day, like this day. It was just me in the garage all day. We started at around 9AM and finished close to 1AM. I was just standing painting the exact same photo all day. In some scenes I was happy and in some scenes I was sad, and in others I was crying. I had to work through all of those emotions in 12 hours, and during my lunch break I had to stay in character so it doesn't even feel like a break. That's a hard day.

But when you finish it -- I talked to this a lot with Steve Little who plays Uncle Jim -- he told me those days are so important. When you finish them you should go home and tape that call sheet or scenes into a journal. Whenever you feel like you have a tough day coming up you can look back and see everything you did that other day, and felt good about, and completed and know that you did that day. If you did that, then you can do another hard day. He [Steve] told me, yes there are hard days and sometimes you feel like you're going to die, but they're good ultimately.

Netflix has become a major player in the entertainment industry in the past few years, what is it like working with them and to be a part of this huge wave?

Well, this is my first job so this is the first company I've really worked with. I have to say, they have made the transitions all very easy, even when they weren't. I got cast two days before we started filming, and everyone at Netflix was so on it. They had my flight, they had this, they had that. They wanted it to be as easy as possible for me to move, they asked if I needed any help getting stuff out of my apartment. They were extremely accommodating. I think they knew how frazzled I was, to the point where they wanted to make sure I got to Vancouver sane and safely before working, and I find that a fantastic quality in any company. They try to take everyone's position on the set as valuable and do whatever they can to make sure everyone is working on a happy set, because the worst thing is working on a bad set.

RELATED: New on Netflix in February