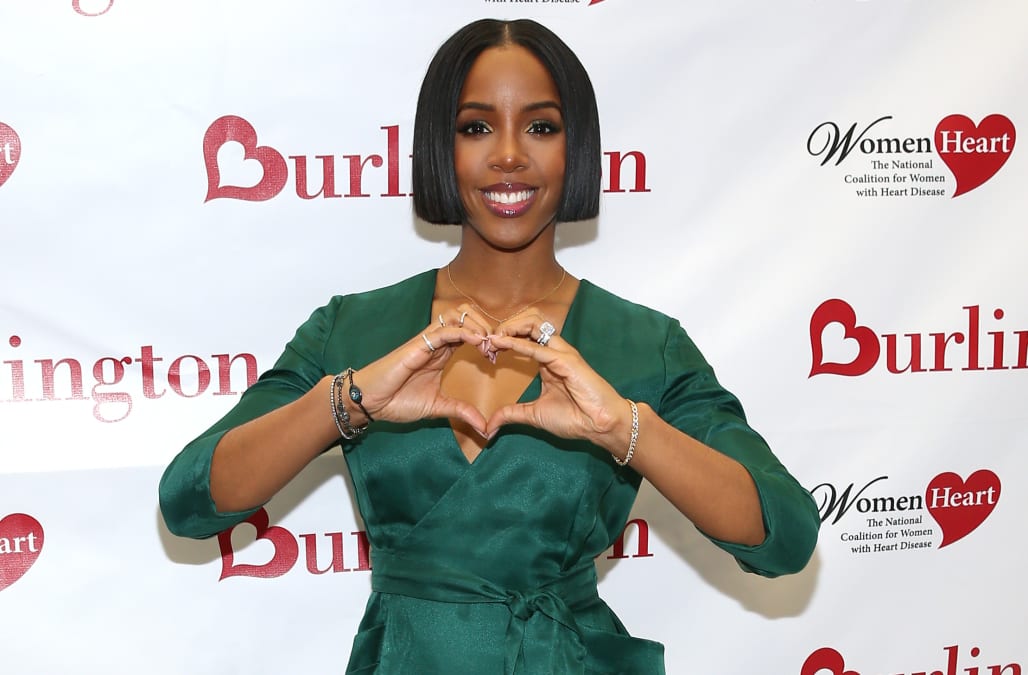 Get ready, Kelly Rowland fans: This year is her "music year," and she has a ton of plans for the next twelve months.

The "Motivation" hitmaker, who recently teamed up with Burlington and WomenHeart to raise awareness for women's heart health, has been hard at work in the studio and plans on releasing new material later this year. It'll be Rowland's first album in four years.

Rowland, who has seen incredible success in her post-Destiny's Child solo career, recently told me that "the recording process is going incredibly well" and noted that she's working with some "incredible" people.

Not only is she working on new music, but the "Love By the 10th Date" star will also take part in "The Voice (Australia)" and release a new book, "Whoa, Baby!," which will be a guide of sorts for new mothers navigating their lives after giving birth.

I recently sat down with Kelly Rowland to talk about recording her new album, why spreading awareness about heart health is so important to her and why a Destiny's Child origin story film won't be coming anytime soon.

52 PHOTOS
Kelly Rowland out and about
See Gallery

Check out my full conversation with Kelly Rowland below:

Tell me about the event today with WomenHeart at Burlington. Why is this cause important to you?

Seeing what WomenHeart has already done was inspiring and raising awareness about heart disease is incredibly important to me. For me, of course, because I lost my mom to heart disease, and it was so sudden. If it affected my life in that way, then I'm sure it's affecting other people's lives -- or can affect other people's lives -- in the way it affected me. I don't want anybody to have to go through that. So, I do want women to be aware and conscious and knowledgeable about their bodies. To have that knowledge should be settling, and if you don't [have it], then just go get a screening.

This is amazing that two brands like Burlington and WomenHeart have teamed up to make sure that women can go get heart screenings. It's necessary, because we can't have this being the leading cause of death in women -- we have too many things to do! We have to change these numbers.

How important is it for you to be using your massive platform to spread messages like this?

It's incredibly important. It's one thing to get on stage and sing and be fashionable, but it's another to get up there and have something real to say. That's what you're really given the platform for.

This movement to help educate women about heart health is coming at a time when women are especially willing to support one another. The timing of this is pretty amazing.

It's perfect. We are in a moment in time -- in history -- where we couldn't be more aligned. We have voices, and they're loud. They're not asking to be heard, but demanding to be heard. Whether it's this or marches or breast cancer or our rights, I just feel like it is time.

It's definitely time, but we have to do it together. We can't just be about one thing -- it has to be everything. If it's affecting our culture as women now, it's going to affect generations to come, and we have to stay alert.

Your film, "Love By the 10th Date," recently premiered. What was the reception like?

The reception was awesome, and it was just so much fun with the cast. I didn't feel like I was working, and every day was a good time. It was also about learning for me, because I hadn't done a movie in a long time. It was a lot of fun.

There seems to be a trend lately of films telling the origin stories of popular musicians and bands. Between the Britney movie, the TLC movie and the New Edition TV show, they're everywhere. Will we ever get a similar Destiny's Child project?

We're not even done! Everybody's still doing things ... Britney is still doing things! To want to see that is amazing -- she's an icon! -- but I feel like I'm not done. I'm just getting started, and it would be too early. It's ridiculous -- we still have history to make as individuals, and we haven't even talked about anything collective to be completely honest.

I listened to your solo material all morning to get ready for this interview. What do you think your most underrated song is?

Ooh! "Red Wine," from my last album. It's one of my favorite songs that I've ever, ever, ever recorded!

What are your current plans for your next big music release?

I'm recording right now, which is why I sound like this! The recording process is going incredibly well, and I'm so excited about it. Lyrics and melody are just pouring out of me right now, and I'm being surrounded -- thank you, God! -- by so many incredible people who are on the same page as I am. It's to the point where, when I get inspired and call them, they were just writing about it or talking about it to someone. I really do feel like God, the universe, women - everybody! - is just giving me what I need for this record.

And what do you have planned for the rest of 2017? What can fans expect from you?

Of course, [I plan] to put out new music, and I want to tour. I am going over to Australia for "The Voice," but I do plan on touring and releasing music. I want this year to be a "music year" for me, and I want to continue talking about heart heath even past Heart Health Month. I'm also releasing a book that I'm so excited about.

'Whoa, Baby!: A Guide for New Moms Who Feel Overwhelmed and Freaked Out (and Wonder What the #*$& Just Happened)" by Kelly Rowland

Tell me about it!

The book is titled "Whoa, Baby!," and it's for moms that feel overwhelmed and freak the f-ck out! That's exactly what happened to me. I didn't have as many questions before giving birth than I had afterwards, so I wanted to write down everything that was happening to me, and I had a conversation with my OBGYN and she said that most women actually have more questions about afterwards. The idea was birthed right then and there.

I've teamed up with my doctor Tristan Bickman. as well as a physical therapist, a psychotherapist, a trainer and a dermatologist, because I feel like there are so many things that happen with women after giving birth -- mentally, spiritually, physically -- and it's overwhelming. This helps you sort through that.