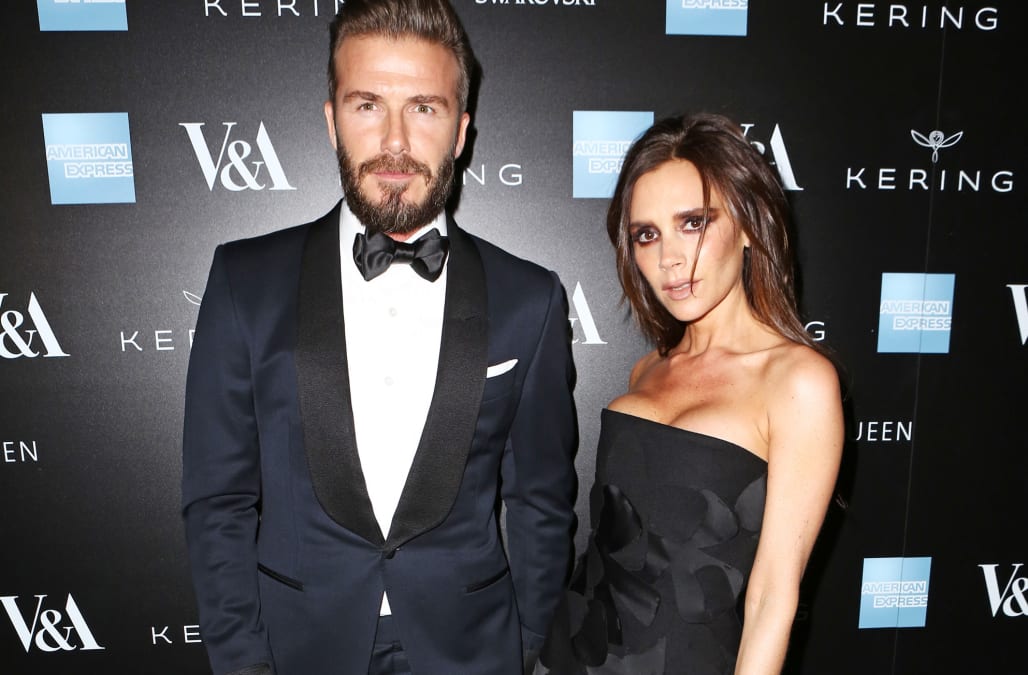 Nearly 18 years after tying the knot, David and Victoria Beckham are taking steps to keep their marriage strong.

In a rare interview over the weekend on a special 75th anniversary edition of BBC Radio 4's Desert Island Discs, the retired soccer star opened up about life with former Spice Girl Victoria Beckham, admitting that the A-list couple recently renewed their wedding vows.

RELATED: Victoria Beckham on Carpark Dates With David Beckham, Fashion Flubs and Regrets About 'Messing With' Her Boobs

"We have renewed our vows since [our first wedding]. It was a lot more private, about six people there in our house," David, 41, stated about the quiet affair.

Their renewal was a far cry from their lavish nuptials in 1999 where the couple wore matching purple outfits. "I even had a top hat in purple," he noted. "What was I thinking? I looked like the guys out of Dumb and Dumber."

The sportsman further elaborated on making his marriage to Victoria, 42, a priority. "We're a strong family unit. We've got strong parents. We were brought up with the right values," he said. "Of course you make mistakes over the years, and we all know marriage is difficult at times. It's about working through it."

MORE: Victoria Beckham Opens Up About the Moment She Fell for David Beckham: 'Love at First Sight Does Exist'

David, who recently collaborated with Kent & Curwen on a new fashion collection, also reflected on the time he and Victoria first met, saying, "She was never into football. Everyone at the time had their favorite Spice Girl. I remember seeing Victoria on the telly, and she was dressed in this black cat suit, which is one of the reasons why she became my favorite Spice Girl."

PHOTOS: The happy couple through the years

26 PHOTOS
David and Victoria Beckham out and about
See Gallery

He added, "I'd seen her the week before, and I must have caught her eye because then the week after she came to another game. She was obviously there for a reason and I was hoping I was that reason, and apparently I was."

David is quick to add that while their lives have changed over the years, they have grown stronger and continue to work together as a team.

"Back when we were 22, 23 years old, the only responsibility that we had was to ourselves and to our jobs at the time," he said. "We're very respectful of our life and when we do go through tough times. We work through them as a family, as a unit."

Celebrity Wedding Anniversary Pics
3 years ago today I married my best friend! @derickdillard life with you just gets better and better! Y'all, it's worth the wait! #lovemyhubby #anniversary
#tbt this is one of my fav pictures of me and Michelle from my wedding(WHICH WAS 10 YEARS AGO TOMORROW!) I love how far away and tiny she looks in the mirror even though she was basically standing right next to me. Thanks to @amyandstuart who are the actual greatest wedding photographers around.
#tbt Just Married! ❤️ March 29, 1997
Wow 17 years ago to this day this happened... I was lucky to meet someone who has the same drive and wanted the same things in life... We have created 4 beautiful children and I couldn't wish for a more loving and caring mummy for them... Happy anniversary, I love you ❤️❤️❤️❤️❤️
Happy Anniversary Darling. 16 years ago today was the happiest night of my life.
#thebreakers2015❤️❤️❤️
6 years ago today we were married. Time sure does fly when you're having fun and you marry up. I'm very grateful to have an amazing wife and mother by my side!!
20 years ago on this day ...
On our anniversary. I'm so thankful to have you in my life... I can't imagine finding my way without you. You are my best friend, the only person in the world that I trust completely and utterly with my heart and soul. I love you more with each passing day and I don't know what I did to deserve you. Happy Anniversary My Love...
Love of my life... thank you for this incredible and sweet journey of being your wife. Today we celebrate 8 years of marriage and 11 together... Thanks for my beautiful and vibrant daughter Sebella Rose... you're truly an inspiration.... Que Dios te bendiga y nos bendiga hoy y siempre!
#tbt Happy Anniversary @randegerber! 16 years and it feels like yesterday!
Happy anniversary, @johnmolner! Thank you for making me so happy and for making me laugh. ❤️
The Roaring 20! I love you @instasuelos #cheerstotwentyyears
I feel so lucky and thankful for 5 amazing years full of love! @laurenblauren
Taken right after I made the best decision of my life. I am the luckiest. #FirstAnniversary 📷 @christianothstudio
Two years ago, @dbelicious and I got hitched. Best. Decision. Ever. #grateful #screenshot #wallpaper
Best day of my life... Just the beginning... This was before the epic dance battle. .. Thanks again to @johnlegend @ludacris @questlove #Guy for providing sweet and sweaty melodies #TheWades #ourlifeourway
Happy anniversary my love. Te amo! #wedding #2009 ❤️❤️❤️Feliz aniversário meu amor. Te amo! #casamento #2009
We set up our Leica on the tripod and took this photo upon returning from the Philipsburg courthouse, marriage license in hand. I adore this photo for many reasons... that I had just married the love of my life, that we were in Montana, & that we had our baby girl Sissy with us. #nationaldogday #love
Happy Anniversary!! My love!! My dream come true!!! Soooo extremely inlove with you
Celebrating 2 wonderful years with my love today!
7 years happy anniversary my love @daniellejonas so blessed to have you in my life. An amazing wife love and mother! You are the best I love you with all my heart
Forever beloved @kyle_newman - Happy 9 years of marriage my dearest one. May you always have the Light, Loving, and Angels surrounding you. Always. 💜🙏💕
7 years in, and still laughing at life together!! Best. Decision. Ever. Happy Anniversary to my best friend, soul mate, and truly better half ❤️
Happy 2 year wedding anniversary to the love of my life @michaelturchinart!! You make every single day an adventure! I love you more than 3 rescue puppies playing with a baby hamster! #LanceLovesMichael ...still.
Today is our Civil Partnership and Wedding Anniversary. I am so grateful to live in a country that acknowledges and supports same sex relationships. David and I feel very blessed. After 23 years together, we are blissfully happy. Love is universal. @davidfurnish #ShareTheLove
Happy anniversary babe 👰🏼 🎩I love you SO much ❤️ cheers to growing old together 🥂#husbandandwife #ipromisetoalwaysloveyou #4yearsago
HAPPY ANNIVERSARY my love @realevanross it's been the best 2 years of my life! Our love is magic 💚
Up Next