Shia LaBeouf debuted a 4-year anti-Trump live stream: 'HE WILL NOT DIVIDE US' 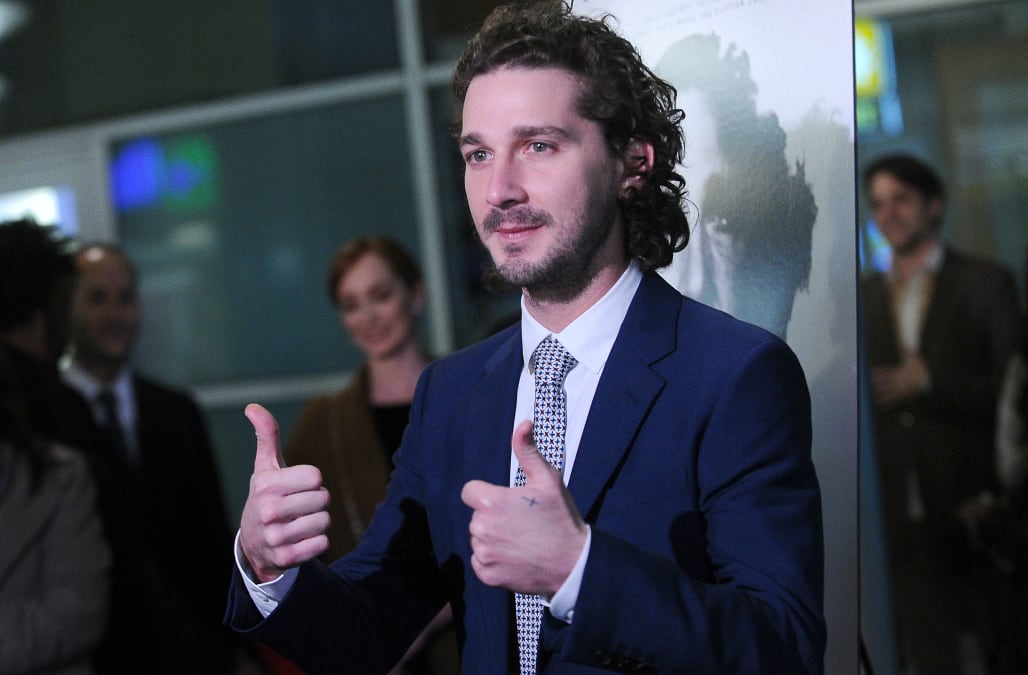 Shia LaBeouf has unveiled yet another piece of online performance art, and this one is aimed directly at new President of the United States Donald Trump.

On the day of Trump's inauguration, LaBeouf announced a new project called "HE WILL NOT DIVIDE US," which is live-streaming footage from a camera installed outside the Museum of the Moving Image in Queens, New York. You can watch the live stream at the official website hewillnotdivide.us.

At the time of this writing, the live-streamed footage consisted of Jaden Smith (actor, rapper, and son of Will Smith and Jada Pinkett Smith) alongside others chanting, "He will not divide us." LaBeouf was not seen in the video.

The stream began at 9 a.m. on Friday, January 20, Inauguration Day, according to the announcement on the site, and invites the public to "deliver the words 'HE WILL NOT DIVIDE US' ... repeating the phrase as many times, and for as long as they wish."

The site says the live-streamed project will exist "continuously for four years, or the duration of the presidency." LaBeouf is working on it alongside his art collaborators Nastja Säde Rönkkö and Luke Turner.

"In this way, the mantra 'HE WILL NOT DIVIDE US' acts as a show of resistance or insistence, opposition or optimism, guided by the spirit of each individual participant and the community," the announcement said.

LaBeouf previously staged #ALLMYMOVIES, a live stream of the actor watching all the films in which he starred.

Hollywood reacts to Donald Trump's inauguration
Welcome to the age of plunder, bluster, and empty rhetoric. In other words, to the Age of Dumb. If you voted for him, you're responsible.
sleeping in
Then, I'm marching. #WomensMarch
https://t.co/V5ziwMJiOV
You guys...why did my email count turn to this number this minute right as he is being sworn in?!?! https://t.co/4oBVoCBdKv
nope
Ok let's do it. And I look forward to the new President setting a great example from today on! https://t.co/f08cdLeyp6
nope
i was going to go to sundance to support john tomorrow but feeling compelled to support my fellow women. see you at the women's march, DC
I made a appointment at the DMV this morning. That's where I'll be. The DMV. 🇺🇸 #AlreadyGreat
Once or twice in every generation a line is crossed so egregiously that where you stood on the issue will forever define you. -Kara Vallow
I'm trying to be a respectful diligent American rt now but as I start to watch this inauguration- Regression is the word that comes to mind.
RT @georgelopez: In urge Latinos and people who support us to joint me and #Brownout on your Avatar #chingon https://t.co/J7NHfjKlFl
Inauguration Day! Nice to be a part of a great American process. 🇺🇸🇺🇸🇺🇸 https://t.co/H7LFKtuZ2N
We are ready. Proud to be an American! #Trump #Inauguration https://t.co/oD4DIPrriA
Stop telling me to "get over it". Get UNDER it. He works for US. The democratic process is constant. Stay informed, stay engaged, speak up.
🙏🙏🙏🇺🇸🇺🇸🇺🇸❤️❤️❤️
Trump wasn't my candidate. But this is my country. And this is actually happening. God bless America! 🇺🇸 https://t.co/VFQuluTuDO
An Alternate Inaugural Address: My reading of Langston Hughes' "Let America Be America Again" (1935) on Trump's Day https://t.co/A2kc4JVsF2
Huge admiration for @HillaryClinton today. Must be such a difficult day for her. Gutsy & gracious to show up, smi… https://t.co/Sqh1h78oXa
It's a great day to watch infomercials!
Trump’s inauguration will be protested in all 50 states and 32 countries, making this the highest attended 3 Door Down concert to date.
For the first time I will not be watching or listening to anything "inauguration."
I'm boycotting my TV not even watching for the inauguration for the 1st time in my life! https://t.co/pc64Tsb6lJ
I think Barron is on his Gameboy. Can't say I can blame him. https://t.co/6o9DLajK5F
Possibly the saddest president? https://t.co/TPACtDnUD3
I agree with everything he's saying and nothing he's doing. One nation under Goldman Sachs.
On the @lennyletter bus! A woman just asked if we were relatives. No, we are riot grrrls (both start with R, I get… https://t.co/OsVR6SUGoD
Maturity, grace and oh boy, is she going high when they went low. https://t.co/kyqsVPlb22
Ladies, remember to set your clocks back 100 yrs tonight. https://t.co/QZmbhOjqjU
@potus We really gonna miss you champ. The good you've done & opportunity's you've given. Truly never know what we got til its gone. Thank u
On my to D.C. for the Woman's March. My plane is so fired up and totally awesome.
for the first time in eight years, Jews can breathe freely in this world. May it continue!
In these times, unite in kindness, deeper understanding, compassion, love, and knowledge. Make sure the truth keeps its meaning.
May God bless our new President Trump & his family, may God bless the Obama family and may God bless us all in the United States of America!
"Patriotism is the last refuge of a scoundrel." Samuel Johnson
I'm having a ball scrolling through the #InaugurationDay tweets. It's a crybabyfest 😂 liberal tears bring me such joy ✊🏻
O horror horror horror, Tongue nor heart cannot conceive nor name thee - Confusion now hath made his masterpiece #quoteoftheday
It’s time to stand with love. Join me in supporting the @ACLU and @PPFA. #loveathon. https://t.co/lyemxjyJ9E
Goodbye Pres. Obama, thx for the service- u finally get to sleep in- SOAK IT UP!! 🙌 @POTUS44
All of the jokes/parody/comedy aside, let's stop for a moment to take a full account of where we are. This country is lost. It's in trouble.
Up Next