Dick Wolf weighs in on when delayed Trump episode of 'Law & Order: SVU' might air 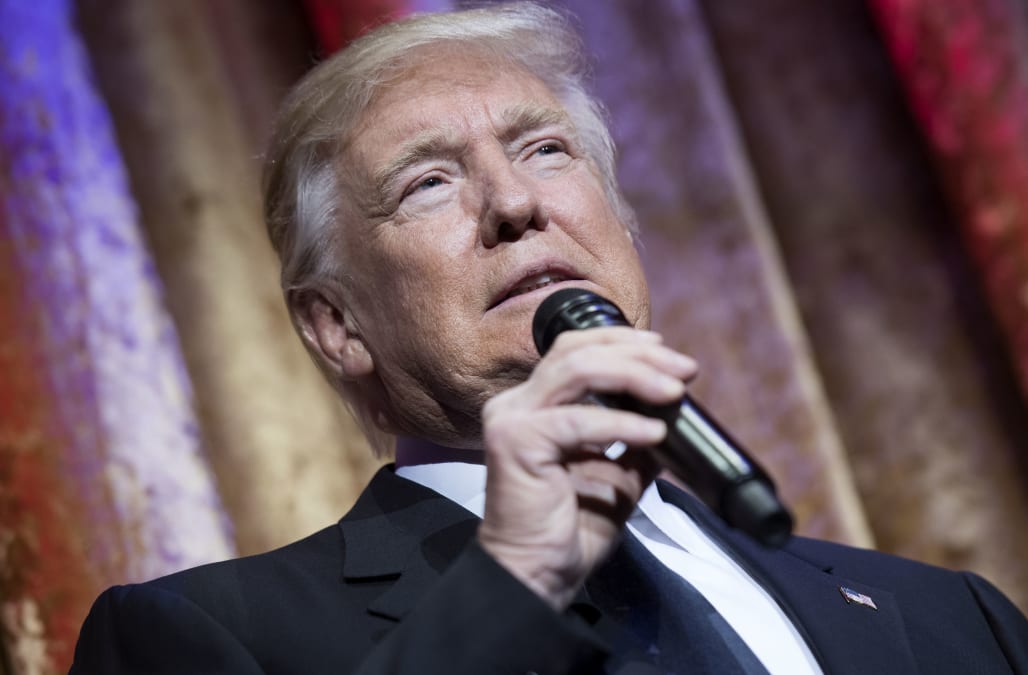 Show creator Dick Wolf made it clear that he doesn't know the fate of his delated "Law & Order: SVU" episode about a Donald Trump-like character.

The episode, which stars "Veep's" Gary Cole as a controversial political candidate embroiled in damaging accusations, was originally scheduled to air on Oct. 26, but was shelved ahead of the Nov. 8 presidential election.

"I suspect it'll air in the spring," Wolf continued. "But I don't know."

Wolf appeared at the press tour to preview "Chicago Justice," the fourth installment of his prolific "Chicago" franchise, which will debut with an unprecedented four-way crossover event on March 1. The three-hour block of programming will consist of episodes of "Chicago Fire," "Chicago Med" and "Chicago Justice," featuring characters from "Chicago PD" throughout.

"It's very challenging," Wolf said. "But it's a great story, and something that I think will keep people sitting there for all three hours."

Also Read:Dick Wolf Wants SAG to Consider All His 'Chicago' Shows as One Ensemble

Wolf compared the shows' use of crossover episodes to a drug addiction, saying that though the payoff can be incredible, they can sometimes be more trouble than they're worth.

"The crossovers are a pain in the ass, everyone hates doing them," Wolf said. "The highs for many of the shows have been during the crossovers, unfortunately it's like ratings crack. And it's a bad addiction because you don't want to overuse it."

"Chicago Justice" star Carl Weathers, on the other hand, said he enjoys visiting the other sets and getting the opportunity to act with the other casts.

"I kind of dig it, but also it's kind of a new sandbox to play in," Weathers said. "We really do have a great time on our set, [but] there's just something cool about waking over to one of those other sets with people we don't work with everyday and throwing down the gauntlet."

"It makes me feel that our show is just that much better," he said.

Read original story Dick Wolf Weighs in on When Delayed Trump Episode of 'Law & Order: SVU' Might Air At TheWrap

See photos of Donald Trump in life leading up to the 2016 election:

Donald Trump's life leading up to the election

Bound for the rigors of business school in the future, Donald Trump received discipline at an early age by attending a military academy. There, he reportedly excelled in extracurricular activities such as being the Honor Cadet.

As someone who loves the art of negotiation, Donald Trump was able to negotiate New York City to provide a 40-year tax abatement for the Grand Hyatt Hotel — the first ever granted to a commercial property.

Master renovator: Trump offered to renovate decrepit areas in need, such as a long-closed ice-skating rink, at no profit to himself, after the city's renovation effort went through five years of delays and more than double the original cost estimate.

Trump's enterprise also stretched out into sports, where he was the original owner of the New Jersey Generals of the United States Football League.

EAST RUTHERFORD, NJ - CIRCA 1983: Team Owner Donald Trump announces he has signed Herschel Walker to play running back for the New Jersey Generals in New Jersey. Walker played for the General form 1983-85.

Donald Trump, real estate mogul, entrepreneur, and billionare, utilizes his personal helicopter to get around on August 1987 in New York City.

(Photo by Joe McNally/Getty Images)
Trump was also notorious for befriending attractive supermodels. His first wife, Ivana, a Czech-American, was a member of the social elite.

Ivana Trump and Donald Trump are seen in December 1982 in New York City.

(Photo by Sonia Moskowitz/Getty Images)
No expense was spared for his belongings, as Donald Trump once paid the sultan of Brunei $30 million for a nearly 300-foot yacht.

American businessman Donald Trump and his wife Ivana sit at a table on board their luxury yacht The Trump Princess, anchored outside the Water Club, New York City, July 1988.

New York real estate developer Donald Trump (L) answers questions as Minnesota Governor Jesse Ventura looks on in Brooklyn Park, January 7. Trump said on Friday he "very well might" make a run for president under the Reform Party banner but had not made a final decision. "I'm looking very seriously if I can win," he told reporters. "And if I can win, I believe I can do a very good job." Trump came to Minnesota to raise money for the party's highest elected official, Governor Ventura, who made it clear that he and the New York developer were on the same wavelength.

Trump also enjoys tennis — he even played a round, wearing his traditional suit, against the legendary Serena Williams.

He also became the owner of the infamous Miss Universe beauty pageant for many years.

Unbeknownst to many, Donald Trump is a formidable opponent on the green. He owns 15 golf courses.

Donald Trump announced on Saturday, 11/9/02 a major addition to his West Coast properties as he purchased the Ocean Trails Golf Club in Rancho Palos Verdes. He discussed the improvements and additions to the club to members of the Rancho Palos Verdes community on Saturday morning. Ocean Trails made headlines in 1999 when days before its scheduled opening, part of the course's 18th hole slid into the Pacific Ocean. The club will reopen in June, 2003 under Trump's direction.

Sometimes, negotiating can be a tough sport. What better way to exert your dominance by taking the center stage among the world's most bombastic figures?

As the fog of the political battlefield has cleared on the Republican side, Trump is now preparing for a likely battle with presumptive Democratic nominee Hillary Clinton.

Being the entertaining host, Trump also spared no expense in providing a spectacular show for friends and family.

As a self-proclaimed family man, Trump attended many public events and television shows with his family, even before his current campaign.

Trump first started showing signs of interest for a possible bid for the US presidency with the formation of a presidential exploratory committee ahead of the 2000 election.

As no stranger to the political process, Donald Trump was even acquainted with members of the judicial branch.

U.S. Supreme Court Justice Clarence Thomas (L), serving as the grand marshal for the Daytona 500, speaks to Donald Trump  on the starting grid at the Daytona International Speedway February 14. JLS/ELD

Trump famously launched his presidential campaign in June 2015 by coming down an escalator in Trump Tower. Since then, he has weathered waves of controversy to become the presumptive Republican presidential nominee.

Trump made his final appeal to voters in swing-states as the contentious campaign drew to a close.

Donald Trump speaks at a rally at SNHU Arena in Manchester, NH, on Nov. 7, 2016, the night before election day. (Photo by Suzanne Kreiter/The Boston Globe via Getty Images)

President-elect Trump at his election night party at the Hilton Hotel in New York City.