Nick Lachey on welcoming baby No. 3: 'Everyone's happy and healthy ... it's been easy!' 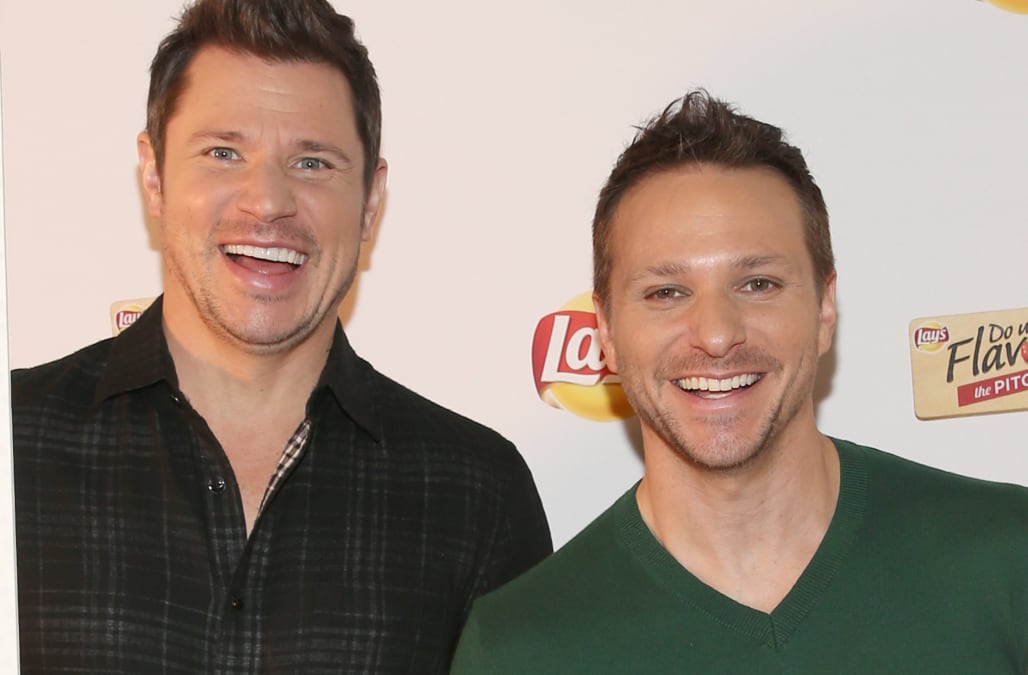 Less than a month after welcoming his third child with wife Vanessa, Nick Lachey is already back to work.

The hardworking musician was busy getting ready to participate in a "pitch off" with his brother, Drew, for the kickoff of Lay's Do Us A Flavor campaign when I chatted with him earlier this week. And, despite having a newborn, he was showing none of the signs of fatigue that normally comes with welcoming another baby into the world.

Not only that, but the 98 degrees frontman said that having a third child has been "easy" when I talked to him backstage at Caroline's on Broadway. Is it crazy that I believed him?

The multi-talented father of three, who has worn many hats throughout his 20-year career, told me that he feels "very lucky to have had a career that hasn't been compartmentalized to one thing," as he should be. Lachey has had success both as a solo artist and as a member of 98 degrees and has participated in a handful of high-profile television shows ("Newlyweds" and "The Sing Off" are the first that come to mind).

I talked to Lachey about life with three children, working with his brother for over 20 years and the scripted boy band show that he's developing with Donnie Wahlberg.

14 PHOTOS
Nick Lachey out and about
See Gallery

Check out my full conversation with Nick Lachey below:

Congratulations on baby No. 3! How have the first few weeks with Phoenix been?

Thank you very much! It's been good. Everyone's happy and healthy, so that's about all you can ask for, you know? After that, you throw your hands up and say, "Hey! Hope for the best!" [Laughs] That's what I've learned about having kids.

How have your two other kids reacted to there being a third sibling?

When my daughter was born, Camden did not totally comprehend that there was another life in the house kind of taking attention away from him, but now that he's gotten used to that -- and she's obviously used to having a sibling -- it's made it easier with the third one. And, he's still so new that it's not like they're competing for toys or anything. When that happens, it'll be a whole other ballgame! That's when it gets nasty. [Laughs] Everyone's cool, and it's been easy.

Coming from a family of four, I know that parents can definitely loosen the reigns a bit once they have a few more children. Has your parenting style changed at all now that you're on your third kid? Have you gotten more relaxed as a father?

A little bit. I think that by the time Phoenix is at an age where that really comes into play I'll probably be a little more hands off the wheel. I was also probably a little bit more laid-back with my daughter than I was with Camden -- even just for self-preservation, you can't keep up that level of focus! It's kind of natural -- and healthy -- that you do that.

Talk to me about your partnership with Lay's for the Do Us A Flavor campaign, where people across the country will submit potato chip flavor ideas for the chance to win $1 million. Why did it feel like a good fit for you?

I was actually a part of this campaign two years ago, so to be here today for the launch of the Do Us A Flavor campaign for 2017 is a lot of fun. It's great to, one, get so many great and random and eclectic flavor suggestions from all across the country, but also, two, the backstories behind all of these submissions are even more interesting than the flavors themselves. What makes this particular flavor so special to that person? What's the emotional attachment? What does it remind them of? Does it take them back to a memory or a person? It's those kinds of things that make them even more compelling than the flavors themselves.

You're about to go into a "pitch off" with your brother, Drew. What's that going to be like?

Drew and I are naturally competitive, and we've worked together a lot over the years, but this was a different kind of angle for a show, so it was a lot of fun to try to prepare for it.

It's pretty awesome that you two have been able to continue working together, as brothers, after all of these years. That must feel special for you.

It's special to me because we get along! [Laughs] If we didn't like each other, then it would be downright miserable. He is (and always has been) my best friend, so the fact that we were able to be in business together with 98 degrees for so many years, to do TV stuff together and continue to work together now, I think that is -- aside from my grandmother, who is probably more proud of that than anybody -- something we're both very proud of.

What else do you have coming up in 2017 that you can tease for us?

98 degrees went on tour last summer, and we're working on something again for this year, so that will be a bit of a surprise. We're excited to be working together again. I'm also producing a show with Donnie Wahlberg and Doug Ellin, who created "Entourage," around the idea of this boy band that's getting back together later in life and all that comes with that. I'm very excited about that and, obviously, Donnie and I toured together a couple of years ago, so it'll be great working with him again.

Solo music wise, I'm always trying to write and do new things, too. I've been very lucky to have had a career that hasn't been compartmentalized to one thing, and what I've discovered is that every year seems to take me in a different direction -- but they're all equally exciting.

More from AOL.com:
Busy Philipps reveals which famous role she gets recognized for 'three times a week'
Nicole 'Snooki' Polizzi reveals what she was nervous about going into 'Celebrity Apprentice'
Kevin and Danielle Jonas talk about the 'learning curve' of having a second child