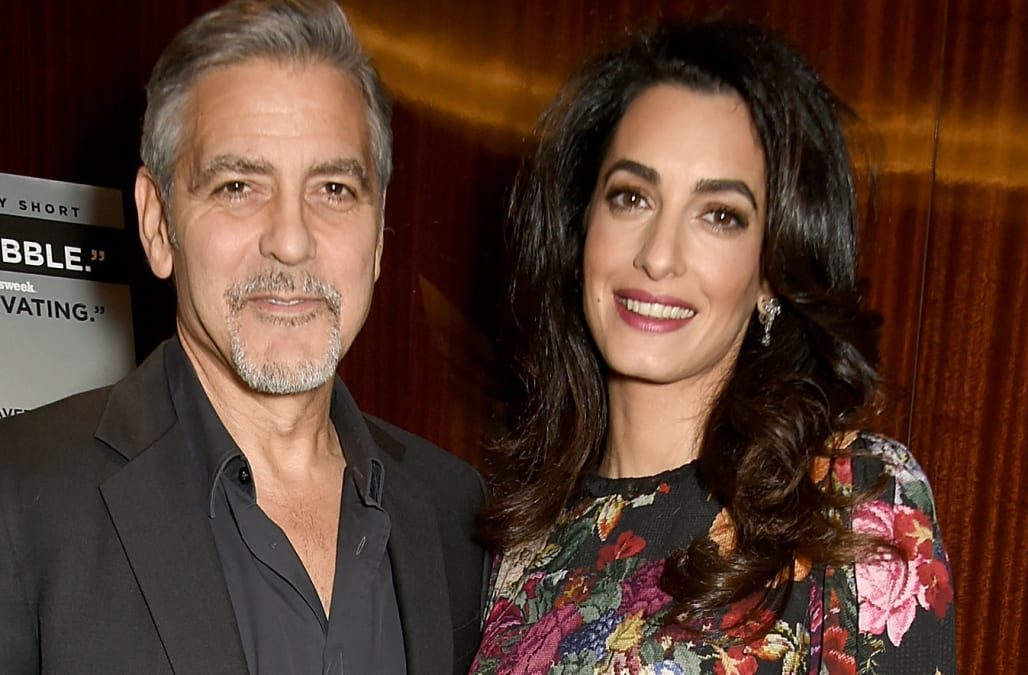 Amal Clooney always seems to pick the perfect look for every occasion.

The 38-year-old civil rights lawyer joined her famous husband, George Clooney, for a special screening of Netflix's documentary, The White Helmets, on Monday night in London, England. Amal stepped out in a stunning floral mini-dress that she paired with black textured tights and matching ankle boots.

While promoting the documentary about those first responders to daily airstrikes in Syria, Clooney also addressed Meryl Streep's Golden Globes speech that led to president-elect Donald Trump calling her "overrated" after she appeared to be expressing her disdain for an interview he did in 2015 with a disabled New York Times reporter. Streep, however, never mentioned Trump by name in her speech.

"I've always said that about Meryl," Clooney told People sarcastically when asked about the president-elect's tweet. "She's maybe the most overrated actress of all-time. She and I worked together on Fantastic Mr. Fox as husband and wife and I will tell you even as a fox, a female fox, she's overrated."

Rhetorically, the 55-year-old actor asked of Trump, "Aren't you supposed to be running the country?"

She was photographed outside the airport in LA in a chic red jacket and black boots.

Amal was seen out in New York City wearing an oversized sweater jacket and leather leggings.

Clooney wore a bright yellow wool coat over a black embroidered minidress for a night out with her husband George Clooney in New York City.

Amal sported a sleeveless indigo dress with intricate side cutouts at the 100 LIVES initiative on March 10 in New York City.

Amal rocked a pair of super cool high-waisted, printed flared trousers with a black feathered top while out for the evening in New York City.

Amal stepped out in New York City with her husband George in neon yellow sandals, which she paired with a cream-colored flowy jumpsuit.

Amal and her husband George Clooney were seen leaving Babbo in New York City on April 3, where she wore a black minidress and cream-colored sheath cardigan with black pumps.

Clooney was spotted out in New York City wearing a camel-colored pencil skirt, nude pumps and a collared orange blouse with a snake-print collar.

Amal wore another pair of insanely cool wide-leg printed trousers while out and about in New York City.

Clooney wore cropped jeans and a floral babydoll tank while visiting the set of 'Money Monster' in New York City.

Amal wore an angular flower-print dress and lace-up sandals while out to dinner with George Clooney in New York City.

Clooney was spotted on the streets of Manhattan in a white lace dress and camel-colored suede jacket, along with strappy white sandals.

Mrs. Clooney was seen in New York City on May 2 rocking light-wash, wide-leg jeans and a blush-colored sweater.

Amal stunned at the LA premiere of 'Tomorrowland' in an Antonio Berardi pink and black minidress.

Clooney was seen arriving in Tokyo on May 24 in a colorful printed wrap dress and camel-colored espadrilles.

To the premiere of 'Tomorrowland' in Tokyo, Clooney sported a stunning yellow gown by Missoni.

Clooney was spotted in London in a cool olive green maxi dress and camel sandals.

Amal was seen leaving a restaurant in Lake Como on July 22 in tailored polka-dotted shorts and a sleeveless black blouse.

Amal wowed onlookers in Ibiza when she stepped out in a slinky gold number alongside husband George for the launch of Casamigos Tequila.

Clooney wore a red dress and high-heeled sandals when she attended a court hearing in the Maldives.

Clooney beamed in a pink two-piece skirt and jacket combo to meet members of the media in Sri Lanka.

Clooney was seen arriving at the Frontline Club in London, wearing a brightly-colored teal suede trench.

Amal was seen out and about with husband George Clooney on in LA, wearing a sophisticated cream-colored dress and stellar nude sandals, and she carried a small green and blue handbag to infuse a little color into the ensemble.

Amal Clooney and husband George attended the premiere of 'Our Brand Is Crisis' in Hollywood, and Amal sported a blush-colored Roland Mouret dress.