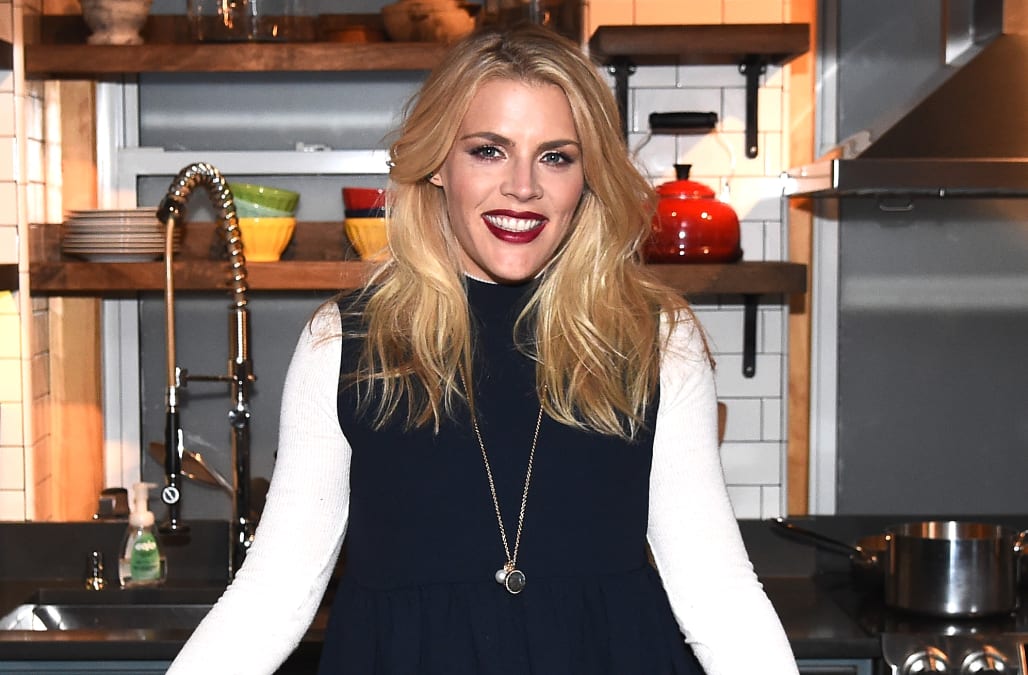 Busy Philipps had a little bit too much fun at a recent award show. When she went to the Critics' Choice Awards with best friend Michelle Williams last month, the "Vice Principals" star says that she found herself getting a little "rowdy," which prompted some skeptical eye contact across the table from Matt Damon.

After all, there was absolutely no food at the long ceremony, despite there being an abundance of alcohol. But, hey, she was having a girls' night with one of her most beloved friends, so who's to say she can't have a little bit of fun?

SEE ALSO: Kevin and Danielle Jonas talk about the 'learning curve' of having a second child

That mentality -- to treat herself and allow herself to have those moments to let loose -- is what led her to Campbell's #WellYesMoment campaign, which is all about making small, gradual choices in lieu of implausible New Year's resolutions. As a mother of two (and self-proclaimed "crazy soup person"), this was exactly what Philipps was looking for.

I recently sat down with Busy Philipps in downtown Manhattan to talk about her #WellYes moments, getting recognized at SoulCycle and the beauty behind her years-long friendship with Michelle Williams.

See photos of Busy Philipps out and about recently:

34 PHOTOS
Busy Philipps out and about
See Gallery

Check out my full conversation with Busy Philipps below:

Talk to me about your partnership with Campbell's Soup for the #WellYesMoment campaign.

Campbell's reached out to me to talk to me about their #WellYesMoment movement and new line of soups, and when you partner with a brand you want it to feel authentic, and I really am a crazy soup person, so I got so excited when I got the call. The campaign also really resonates with me, though, because I like the idea that they're saying, "Let's make these small changes that can result in big changes in your life."

It doesn't have to be all or nothing, which is the trap that people get into with New Year's resolutions. I know that I've been guilty of that myself. I'm like, "I'm going to go to Barry's Bootcamp for 30 days straight!" [Laughs] So, I like the idea of having a #WellYesMoment, where it's like, "Yeah! I'm going to treat myself nicely and take a nice walk or wake up early for a yoga class, but maybe tonight I'm going to also have a margarita." You know?

Totally -- it's not about planning it out in advance, which must be a better mentality for you as a mother. You want to treat yourself and have "me time," but motherhood is unpredictable, so it doesn't always go as planned.

It is unpredictable, and some weeks it can be really hard to schedule that in. My daughters have both been sick a lot this winter -- and even though I would like more "me time," when your kids are home sick from school, you don't get the chance to have it all the time.

But, yeah, that's my involvement [with Campbell's], and the Well Yes! soups are also great. I love that they're in BPA-free containers, which is really important to me as a mom and has been for a very long time. There are also no artificial colors or flavors and with ingredients like quinoa and barley and kale, it's easy! I like the idea of having really purposeful ingredients that add to the soups.

It's awesome that the soups make eating healthily easier, but how do you resist the temptations that are especially prevalent at the holidays?

I'm [part of] a big cookie household, and I make my grandma's cookies. My sister and I both separately make them every year -- they're pecan and sugar and rolled in powdered sugar and delicious -- and they're literally why I gained 10 pounds last winter. This year I've been so good about it, though -- I'm definitely having Well Yes! moments.

So are you giving yourself the week around Christmas to eat the cookies?

I'm not even going to eat the cookies this week! My Well Yes! choice is to treat myself a little bit better, because I am going to the Golden Globes with Michelle, and I don't want to look back and be like, "Oh no, the cookies!"

... and the Golden Globes are early!

They are! That is the most unfair award show, because you have to be skinny right after New Year's! Or at least, like, fit into your dress. [Laughs]

But, yeah, the Golden Globes are fun, and I've been before, but we were just at the Critics' Choice two weeks ago, and it was really long, there was no food and there's alcohol. At one point I was like, "Oh, no ... I'm getting rowdy!" [Laughs] Like, when Bob Odenkirk -- who's an old pal of mine -- won, I started screaming. Matt Damon was sitting across the table at me, and I was like, "I know him, it's cool!" like a crazy person.

You mentioned going to the Critics Choice Awards with Michelle Williams. Talk to me a little bit about that friendship ...

Because it's so well-documented everywhere? [Laughs]

Yes, but also because it's really special to watch you guys continually show up to support one another, which you've been doing for years now.

I think that people think certain things about actresses, like that [the dynamic] would be like "What Ever Happened to Baby Jane?" with all the fighting. Maybe it's not just actresses -- maybe it's a deeper, misogynistic idea of female friendship, that women can't support each other if we work in the same field, or that we can't be happy for each other's success.

But, the truth is that I've been doing this for long enough that I am well aware that everyone's careers are different and everyone has their own journey. Each person is a different kind of performer, and I am just so genuinely happy for all of my girlfriends who are actresses, who continue to work and find success and find roles that inspire them. I want that for them! Even if I'm up against a friend for a role and that friend gets it, I feel like that's their part!

That being said, you've also had your fair share of pretty major roles on a handful of iconic shows: "Freaks and Geeks," "Dawson's Creek" ...

Oh, my God! "White Chicks" is so iconic.

People are obsessed with that movie! I get recognized for "White Chicks" at least three times a week. It happened to me yesterday at SoulCycle: Somebody came up to me was like, "I'm obsessed with 'White Chicks,' and I watch it all the time!"

Well, you were a scene-stealer in that movie.

But, seriously, do you realize how special it is that you've been able to have all of these amazing, memorable roles over the course of so many years?

I actually do realize it, and I'm really grateful for my career! I think that, to be perfectly honest, I was more panicked and less settled before I became a mom. Not that becoming a mom changed everything -- I still am ambitious and want to do well and find good work and do good things -- but I think it just settled me. We all make choices in our lives and are on our own paths career-wise and personally, and my path is different than everyone else's, so I'm just settled with that.

That's not to say that sometimes I'm not thinking, "Oh, no! Why am I not [doing this or that]?" but those moments are very rare. In terms of supporting other women or friends, it's not even a question. It's so dumb to me! Why wouldn't I do that?!

And, like you said, you're reminded of those amazing moments all the time.

Totally. [Laughs] But, really, Michelle asking me to be her date to all of these award shows is super fun, and I love doing it and being there for her in that way. We live on different coasts, so a lot of times our opportunities to see each other are scattered and revolve around work. So, we try to fit in our one-on-one time around that.

More from AOL.com:
Nicole 'Snooki' Polizzi reveals what she was nervous about going into 'Celebrity Apprentice'
Jana Kramer opens up about her first Christmas with daughter Jolie Rae
Nate Berkus opens up about his 'intensely personal decision' to quit smoking