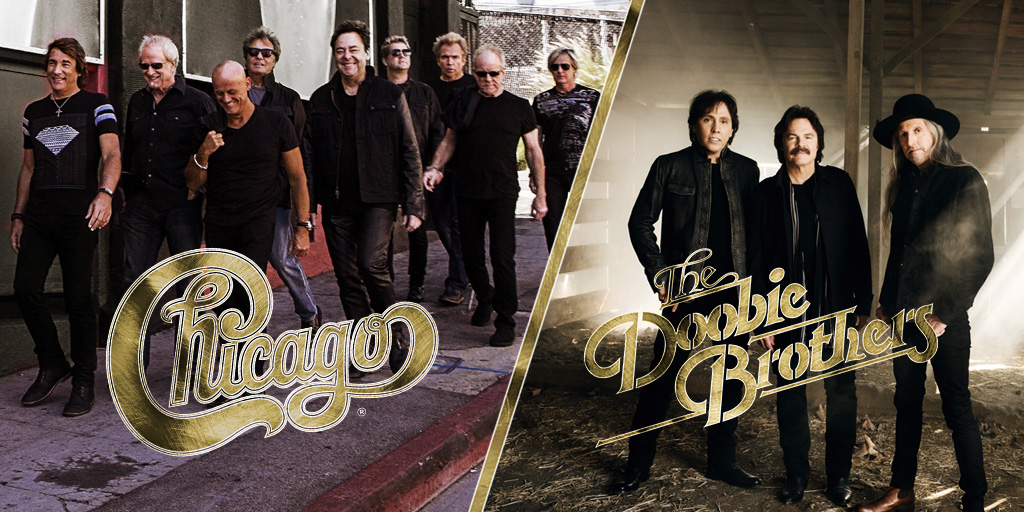 The Doobie Brothers and Chicago are going back out on the road together, teaming up to co-headline a summer tour that kicks off in Concord, C.A. on June 7. Together the bands have sold over 150 million records, and on this latest tour they are crisscrossing North America and bringing us 30+ live performances of our favorite tunes like "Black Water" and "25 or 6 to 4."

"We have played with The Doobie Brothers a couple of times previous to this," Chicago's trumpeter Lee Loughnane said. "But, we are especially excited to get to tour with them this summer."

For The Doobie Brothers' Tom Johnston, touring with Chicago is particularly thrilling because of his personal interest in Chicago's music. Clearly, fans also see a connection between the bands.

"Chicago has great music that I was into before we got anywhere, and touring with them is a pleasure," Johnston revealed. "We grasp the same crowd, really good crowds, and even though we don't play the same kind of music in a sense, we always have a great time."

Chicago is celebrating their 50th consecutive year of touring, and Loughnane credits the band's success to their amazing fans that, year after year, request them to come back on the road. On this summer's tour, the two bands will take the stage separately, but Loughnane hopes that he can convince The Doobie Brothers into performing an encore set together.

"We will both play our shows as normal with songs from the beginning to present day, but I have high hopes that we can do something together," Loughnane said.

As for The Doobie Brothers? Don't expect to see live mashups from the band's 2014 album, "Southbound." While Johnston reveals collaborating with artists like Brad Paisley and Sara Evans was a lot of fun, it was strictly for the album. They did change a lot of their set list for this new tour. Johnston believes that switching up their tour set is as crucial for the fans as it is for reenergizing the music, itself and the band.

"Changing up the music for tour was needed," Johnston said. "We overhauled the whole set, but kept the "chestnuts" and the crowd has really been digging it."

Though the digital era has altered the way we listen to our music and communicate with our favorite bands, for Loughnane and Johnston the only real change to touring is the nuisance of travel.

"The airport situation is different, you have to be searched every time and you immediately feel like a criminal, but it's worth it," Loughnane dished. "Our music has resonated with so many different generations and the fact that people come to see us and get the same feeling from the same songs is amazing; it is really an emotional response like no other."

According to Johnston, The Doobie Brothers are also reaching new fan bases with the help of streaming platforms and their playlists.

"It is gratifying to have younger people discover our music, especially when it happens without the help of their parents," Johnston said. "Now we cover a demographic of people who range in age from their 20s to their 60s."

This tour is also a way for Chicago to celebrate their induction into the historic Rock & Roll Hall of Fame.

"Being inducted into the Rock & Roll Hall of Fame has definitely changed the way other people look at our music," Loughnane said. "All of a sudden we are in a club that is equivalent to a Heisman Trophy Winner, but for us life goes on and we are just go back out on tour as usual."

In the meantime, The Doobie Brothers are working on a new album and Chicago fans can check out "Now More Than Ever: The History of Chicago," a retrospective of the band airing on CNN. According to Loughnane, viewers will see a cohesive movie that illustrates the ups and downs of the band's 50 years.

"Seeing this footage come to life again has been mind boggling and I am so proud to be a part of something that has lasted so long," Loughnane said.

Tickets for the tour go on sale, January 9, at LiveNation.com