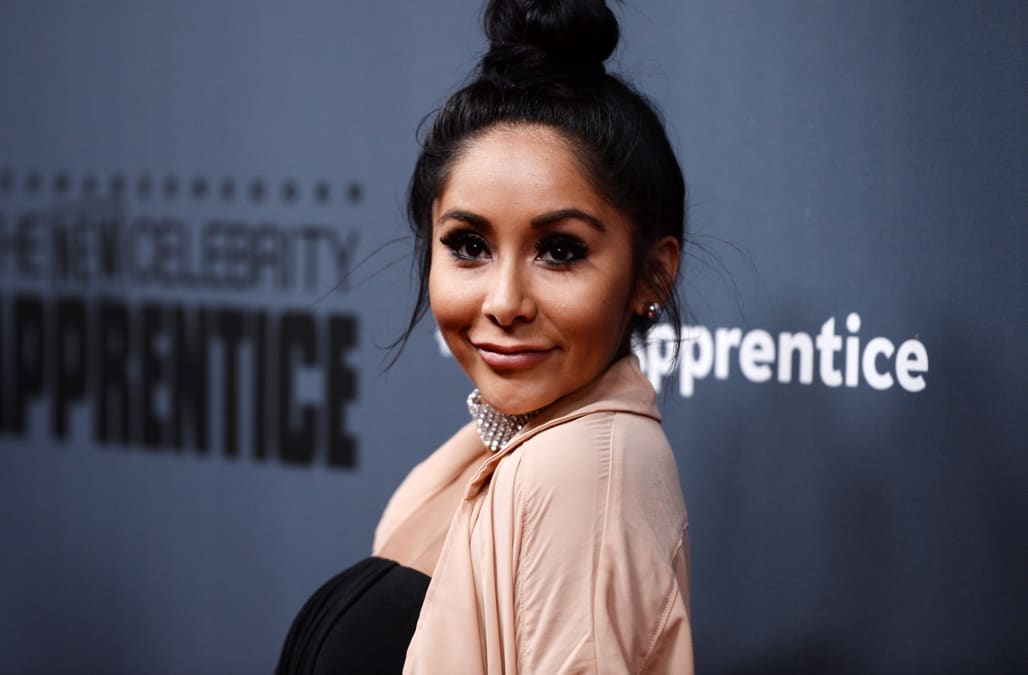 Nicole "Snooki' Polizzi has come a long way since "Jersey Shore." Since graduating from the wild MTV juggernaut, Polizzi has starred in two more reality TV shows, authored a New York Times best-seller, gotten married and given birth to two children. Even so, the effervescent star has retained the same signature flare and style that audiences first fell in love with back in 2009.

And she's only just getting started. Polizzi will appear on "The New Celebrity Apprentice," a reboot of the original "Celebrity Apprentice" that will be hosted by Arnold Schwarzenegger instead of president-elect, Donald Trump and premieres on NBC on Monday, Jan. 2.

For those familiar with the reality star, the "Apprentice" boardroom might not seem like her natural habitat, and Polizzi knows that -- that's why she was nervous for the show, she told me during a recent phone call. But, what audience's will recognize in Polizzi is her refusal to shy away from a new experience, which is exactly what the show represented for her. Plus, it didn't hurt that the show's new host is one of her idols.

I caught up with Nicole "Snooki" Polizzi over the phone to talk about her experience on the "Celebrity Apprentice," her inspiring friendship with Jenni "JWoww" Farley and what to expect from her in 2017.

Check out my full conversation with Nicole "Snooki" Polizzi below:

You're on the new season of "Celebrity Apprentice," which premieres on Jan. 2. How did you end up in the cast?

They basically just called and asked if we wanted to be part of the show. I had to do my research a little bit, though, because I had never really watched it before. I had to see what I was getting myself into! Then I realized that it's for a great cause, and, of course, Arnold is hosting it now, so it was really a no-brainer. I was like, "Let's just do it!"

What charity are you playing for?

North Shore Animal League. I definitely wanted to give back to the animals, because I love animals more than people, so I had to choose them.

How was your experience on the show overall? Were you nervous going into it?

I was kind of just winging it. I was definitely a bit nervous, just because I'm not that competitive, and I knew that a lot of people on the show would be in it to win it. Obviously, I would love to win, but it was more of just a new experience to test myself and a new show I could do.

There are some big names in the cast this season. Who were you most excited to be on the show with once you found out who would be on it with you?

It was just nice to see familiar faces, you know? It's hard going into a project not knowing anyone, so when you see a few people you know, it's makes you feel more comfortable. Seeing Brooke Burke was great, because I got to know her during "Dancing With the Stars" -- that was good to have someone that I know -- and Kyle Richards, because I had met her a bunch of times. It was nice to see those two, because I was like, "If I get scared, I can just go to them."

What can we expect from you this season? Is there anything you can tell us?

Nothing really! [Laughs] Just that It was a good experience for me. I loved it, and I loved meeting all of the other people, especially getting to meet one of my idols, Arnold, was amazing. Just the whole experience overall was really awesome.

This is his first season hosting the show. How'd he do?

He definitely brought it to a place where it's clearly his show. It's "The Arnold Show" now, just because he's a new boss and he wanted to do it his own way. He definitely made it his own, which was different, because after binge-watching the previous seasons, you think you're getting into one thing and then you end up getting into it and it's totally different. He made it his own, which was great.

Switching gears a bit, you've now done two seasons of "Moms With Attitude" with Jenni "JWoww" Farley. How special is it for you guys to still be able to work so closely with one another so far after "Jersey Shore"?

We were besties on "Jersey Shore," then [we had] "Snooki and JWoww" and now we have a show about being moms. So, I think we're just grateful that we can still work together! We love that the fans love everything that we're doing with the show, whether it's talking about being millennial moms, trying to find yourself as women still or just doing fun activities with our kids. It's fun.

What have you guys learned from each other about being moms?

I don't know what I've given to her, but I can tell you that she's taught me about patience. I know that I don't have a lot of patience [laughs], and she definitely has patience when it comes to [her daughter] Meilani. So, I've definitely learned to not freak out so quickly.

It's pretty awesome that you both have been able to sustain and evolve your brands after all of these years. What do you think the key has been for you?

Basically, just keeping it real and not pretending to be something you're not. I think that's what fans appreciate and that's why they still support us and watch everything that we do. We're just being honest and sometimes we're even honest about things that we don't want to be honest about, so I just think that staying true to yourself will always be good for your brand.

What are you looking forward to in 2017?

Just the unknown of what's to come! I definitely want to get back into reality on cable, so trying to figure out what my next thing is there [is exciting]. You always get into a new year not knowing what's going to happen, and then you have all of these opportunities. I'm just excited to see what those new opportunities to come are.

More from AOL.com:
Nate Berkus opens up about his 'intensely personal decision' to quit smoking
Kevin and Danielle Jonas talk about the 'learning curve' of having a second child
Troian Bellisario explains why the end of 'Pretty Little Liars' comes with a 'bittersweet prize'