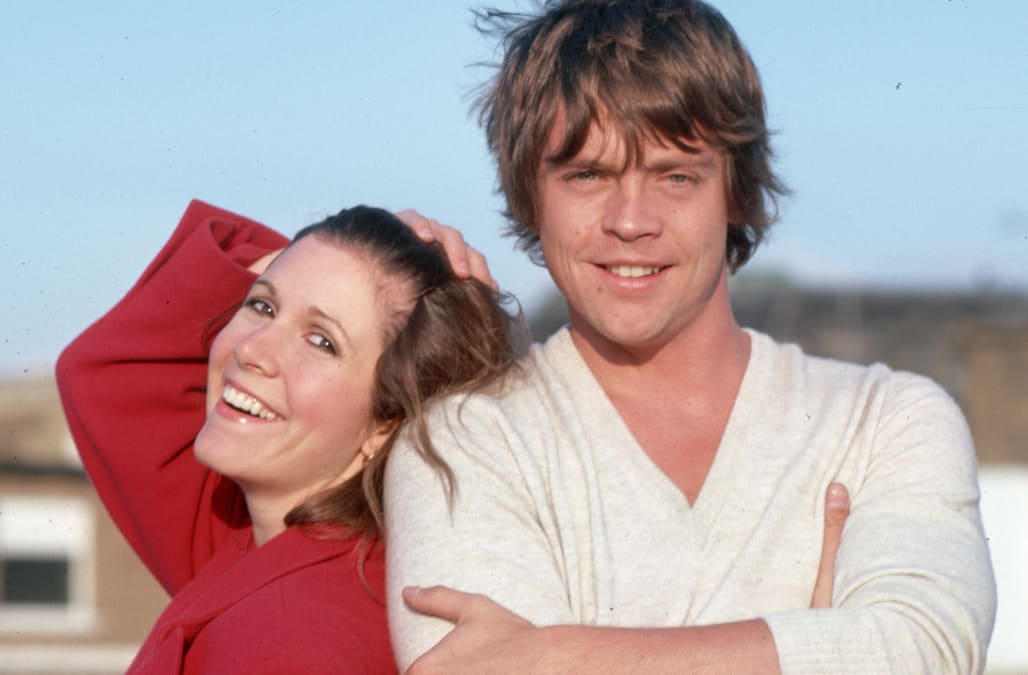 Carrie and I occupied a unique area in each other's lives. It was like we were in a garage band together that somehow hit it huge. We had no idea the impact StarWars would have on the world. I remember we were out on tour right before the movie opened. By the time we got to Chicago, there was a crowd at the airport. I said, 'Hey look, you guys, there must be somebody famous on the plane." I was looking around to see who it might be. And then in the crowd I saw a kid dressed in a Han Solo vest. Then I saw girl dressed like Princess Leia. I said, "Oh my God, look, Carrie, there's somebody dressed just like you. She's got the buns on her head!"

The first time I met Carrie was at dinner in London before we started filming together. I had been the first one to go over to Africa with Sir Alec Guinness and the robots, to do all the desert planet stuff, then I came back to London and then Harrison Ford came over. Carrie was the last piece in the puzzle to come to London. So I said to the production office, "I'd like to meet her before we work together." They worked out that we'd meet for dinner. You know, she was 19 years old at the time. I was a worldly 24. So I was thinking, "Oh my God, it'll be like working with a high school kid." But I was just bowled over. I mean she was just so instantly ingratiating and funny and outspoken. She had a way of just being so brutally candid. I'd just met her but it was like talking to a person you'd known for ten years. She was telling me stuff about her stepfather, about her mom, about Eddie Fisher — it was just harrowing in its detail. I kept thinking, "Should I know this?" I mean, I wouldn't have shared that with somebody that I had trusted for years and years and years. But she was the opposite. She just sucked you into her world.

See photos of Mark Hamill through the years:

I was so middle class. Growing up, the closest thing to a celebrity we had was our next door neighbor, who was a baggage handler who returned Jerry Lewis' wallet that fell on the tarmac in San Diego. But Carrie was something completely different. She dropped out of high school to be in the chorus of "Irene" on Broadway. I was just in awe of her.

She was so committed to joy and fun and embracing life. She had an Auntie Mame quality to her. I would do crazy things to amuse her on the set. Making her laugh was always a badge of honor. I remember during Empire we were split up storywise, it was a difficult film to shot and there was a lot of tension on the set. I was off on the swamp land with the puppets and robots, but at least Carrie and Harrison got to work with human beings. Once at lunch time she said, "You should try on my jumpsuit." I said, "The one-piece white jumpsuit? You're what, 5'2"? I'll never get in!" She said, "Just try." I put on that Princess Leia zipper jump suit and it was so tight I looked like a Vegas lounge singer. If that wasn't ridiculous enough, she had me put on one of those bald cap masks with the Bozo hair and glasses and nose and then she walked me around the back lot.

The lengths I would go to hear her laugh — there were no limits. I loved her and loved making her laugh. She would do these crazy things and make me do these crazy things, but I really don't think they were crazy after all. In a way, it was a defense mechanism for her. She was so off the wall, she could use it as protection. Part of what was so poignant about her was that she was vulnerable, that there was this glimmer of a little girl that was so appealing and it roused the protective nature in my personality.

See photos of Carrie Fisher through the years:

I'm grateful that we stayed friends and got to have this second act with the new movies. I think it was reassuring to her that I was there, the same person, that she could trust me, as critical as we could sometimes be with each other. We ran the gamut over the years, where we were in love with each other, where we hated each other's guts. "I'm not speaking to you, you're such a judgmental, royal brat!" We went through it all. It's like we were a family.

When you were in her good graces, you couldn't have more fun with any person on the planet. She was able to make you feel like you were the most important thing in her life. I think that's a really rare quality. And then you could go 180-degreees opposite, where you were furious with one another and wouldn't speak for week and weeks. But that's all part of what makes a relationship complete. It's not all one sided. Like I say, she was a handful. She was high-maintenance. But my life would have been so much drabber and less interesting if she hadn't been the friend that she was.