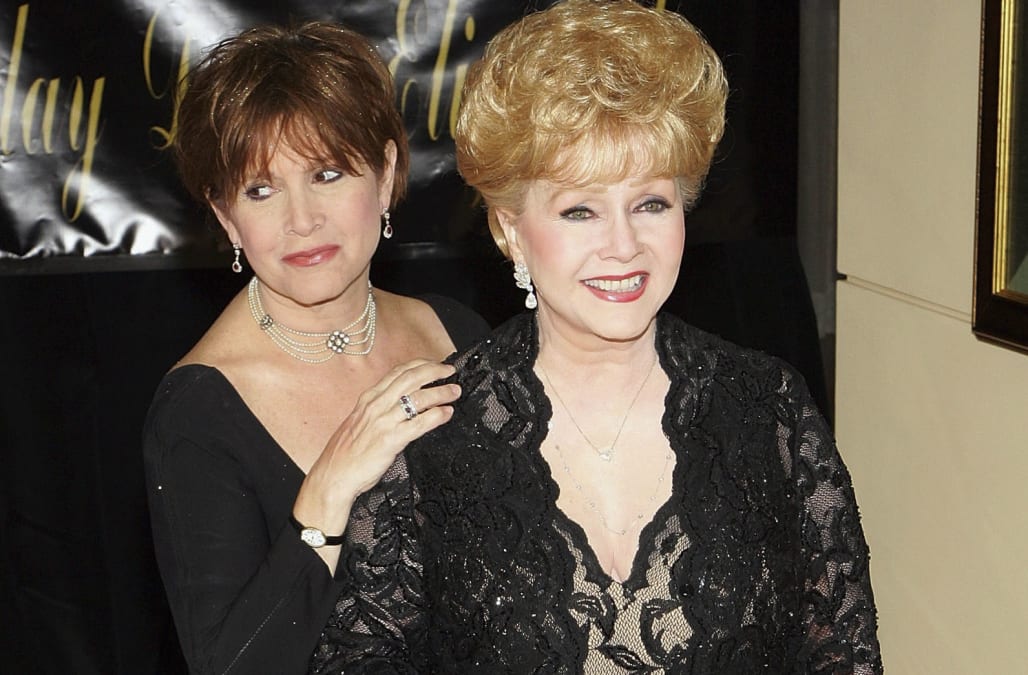 A month before both Carrie Fisher and Debbie Reynolds passed on, only a day apart, the "Star Wars" heroine looked back on her loving, complicated relationship with her Hollywood legend mom.

Growing up in show business, Fisher had an unorthodox relationship with her mom, although they grew closer as adults. A documentary about their lives, "Bright Lights: Starring Carrie Fisher and Debbie Reynolds," will premiere on HBO in March.

Reynolds, the "Singin' in the Rain" star and Broadway icon, died Wednesday at 84 — just one day after Fisher died at 60. Here are excerpts from Fisher's comments on NPR's "Fresh Air," with host Terry Gross:

Also Read:Debbie Reynolds, 'Singin' in the Rain' Star and Mother of Carrie Fisher, Dies at 84

GROSS: You had a very contentious relationship with her when you were a teenager, and I think that probably continued into your 20s, in that, you know, you worked in her Broadway show... How did your relationship change as she became an older woman? ... Is the relationship still contentious? Has it changed?

FISHER: Not at all. I could appreciate – she's an immensely powerful woman. And I just admire my mother very much. She also annoys me sometimes when she's, you know, mad at the nurses. But, you know, she's an extraordinary woman, extraordinary.

There are very few women from her generation who worked like that, who just kept a career going all her life and raised children and had horrible relationships and lost all her money and got it back again. I mean, she's had an amazing life, and she's someone to admire.

PHOTOS: Debbie Reynolds and Carrie Fisher through the years

Debbie Reynolds and Carrie Fisher through the years

A newcomer to the ranks of fatherhood, Eddie Fisher was named 'Father of the Year in TV' by the National Father's Day Committee. Mrs. Fisher (Debbie Reynolds) and the children presented Fisher with a handsome photo wallet containing their pictures. Carrie Frances is 19 months and son Todd (L) is 4 months old.

Actress Debbie Reynolds, still deeply upset over separation from singer Eddie Fisher, was hospitalized here suffering exhaust indigestion. Meanwhile MGM Studios plan to shoot 'around' the actress until here where she is working in The Mating Game. Debbie holds her two children, Carrie and Todd, 8-mos, (right) in this photo made during the current shooting at the site.

Carrie Fisher, 3, gives her mother Debbie Reynolds a hug after her afternoon nap in their home November 16, 1959 in West Los Angeles, California.

Debbie Reynolds with her children Carrie and Todd Fisher, on the site of the new museum that will house her collection of film costumes.

Actresses Debbie Reynolds (L) and Carrie Fisher (R) arrive at the premiere of 'Star Wars Episode III: Revenge of the Sith,' at the Loews Cineplex Uptown Theatre May 12, 2005 in Washington, DC. Star Wars premiers are taking place across the country tonight.

Actress Debbie Reynolds (R) unveils the site of the new Hollywood Motion Picture Collection which will house her $30 million collection of movie costumes and props in Hollywood, June 19, 2001, with daughter Carrie Fisher at her side. The movie memorabilia museum, set to open February 2002, will be located at the Hollywood & Highland development which is also the site of the Kodak Theatre, permanent home of the Academy Awards ceremony.

Actresses Debbie Reynolds and Carrie Fisher arrive at the premiere of HBO's documentary 'Wishful Drinking' at Linwood Dunn Theater at the Pickford Center for Motion Study on December 7, 2010 in Hollywood, California.

Actresses Debbie Reynolds, Carrie Fisher and Joely Fisher arrive at the premiere of HBO's documentary 'Wishful Drinking' at Linwood Dunn Theater at the Pickford Center for Motion Study on December 7, 2010 in Hollywood, California.

GROSS: Did you appreciate her strength and her accomplishments more as you got older?

FISHER: Oh, God, yeah. No, when I was a kid, I just thought she was someone who was telling me what to do. And I didn't want to do it.

GROSS: How did you feel about her celebrity when you were young? Was it helpful? Was it intrusive?

GROSS: Your mother's most iconic film is "Singing In The Rain," you know, one of the great musicals of all time. What are your thoughts about the movie? And if you like it now, did you always, or did it take you a while to appreciate that film, too?

FISHER: No, no, I always liked it. It's brilliant. I mean, to do the transition from sound – from silent to sound is a brilliant, brilliant time to focus on. And what was interesting to me is that there's three people acting in the movie then. It's two men and a female. And it's the same with "Star Wars." And both movies were sort of, you know, iconic at the – well, they did the AFI 10 top films, and one was "Singing In The Rain" and one was "Star Wars."