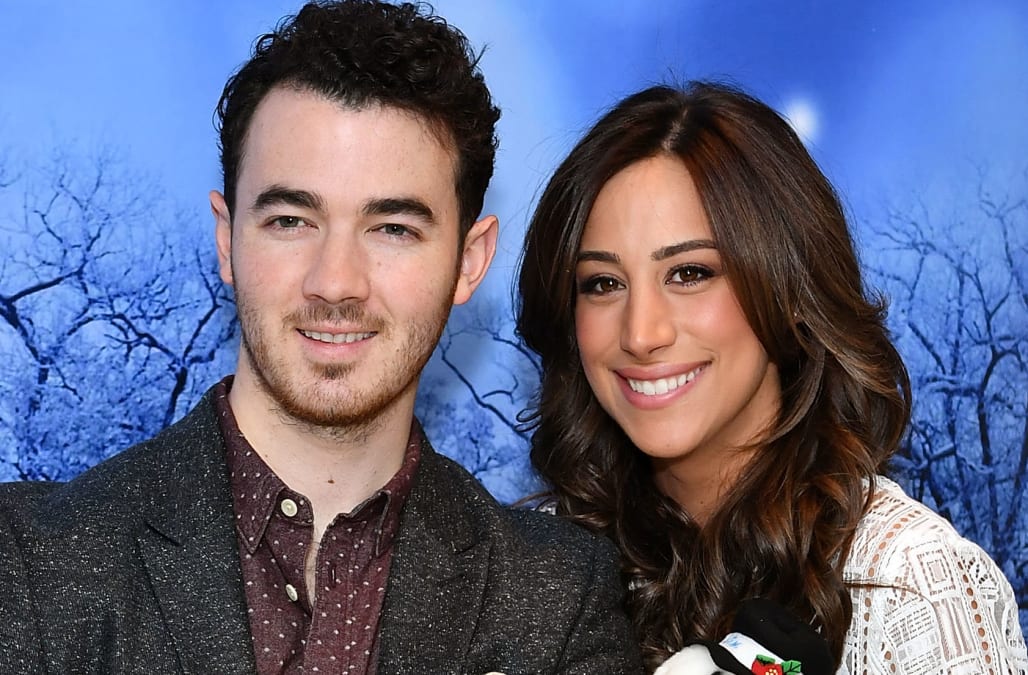 A little over a month after welcoming their second child, Valentina Angelina, into the world, Kevin and Danielle Jonas were ready to make their post-baby debut last week. To make it even better, they stepped out for the first time for a good cause this holiday season.

In partnership with Aflac, the couple -- who are also parents to 2-year-old Alena -- is spreading holiday cheer by pitching in to help 25 families who have been impacted by an accident or illness this year. The Jonas family knows how important the support of loved ones are, so the #AlfacHolidayHelpers program was a perfect opportunity for them to be there for others, especially when they have a little extra love in their hearts brought on by their adorable newborn daughter.

I caught up with Kevin and Danielle Jonas ahead of their public debut to talk about giving back at the holidays, their first month with Valentina Angelina and what they're excited about for 2017.

See photos of Kevin and Danielle Jonas together through the years:

Check out my full conversation with Kevin and Danielle Jonas below:

How does it feel to me making your first appearance since having your second child?!

Kevin: Ironically, it's also our anniversary! It's been 7 years today.

Congratulations! How has the last month been since Valentina was born?

Danielle: There has definitely been a learning curve. Having two is like having five [kids], which is one thing we've learned. We feel the love, though, and we're very lucky with how Alena has been with the little baby. She loves her, so that's been a big help. Her not asking, "When is she going back?" is just a great thing!

What has been your most memorable moment since her birth?

Danielle: Actually, the other night I was sitting on the couch with Valentina -- she was laying on my chest -- and Alena came and sat next to me. I was just like, "Oh my God! I have two little girls, and I am just loving life."

Are you taking the holidays most low-key this year since she is still so young?

Kevin: A little bit, yeah. We will definitely see the family, and that will be great to spend time with them, but at the same time we're just in a good space and we're really, really happy right now. I think that we're just excited about Santa coming and all those fun things.

Danielle: It will be a bit different, though -- I won't be having Christmas this year like I normally do. My mom will have it instead.

Kevin: But I think that's why we were so blessed to be a part of this program with Alfac, because we understand that giving back is a huge piece of the holiday season. Especially with the lady that we're able to help out this year through the #AflacHolidayHelpers program, it's been amazing. She's a single mom, who has had multiple heart surgeries this year, and sometimes being able to have a little bit more holiday cheer is a good thing. We are very blessed in our life, and we understand -- well, Dani especially from one mother to another mother -- that it can be a challenge with kids. So, the fact that we can give back a little bit this year is a huge help.

How did the partnership with Aflac come about? What about it felt like a good fit for you?

Kevin: You know, we understand the importance of knowing that things can change very quickly when it comes to family. There are certain things that you need -- whether it's in health or in life -- and maintaining that same life going forward [despite those obstacles] is really important. The little things that add up that you weren't expecting can really affect what people can do during the holidays or even just regular life.

When they approached us, it was something that we understood. We have a lot of friends that use the service or are a part of the program ,because they can't afford to go out of pocket with everything that happens with friends or family or themselves. When we got approached by them, we were immediately into it, because anything that we can do to give back and spread holiday cheer is important to us. It's a huge time for giving, and this is an incredible company, in that they're willing to do this.

Doing work like this must also put into perspective how blessed and fortunate your family is, as well.

Kevin: Absolutely. We have been very blessed in our life, but there are members of our family that go through their own struggles, too, including us. We just went through a little struggle with our second daughter, where she was having a hard time figuring out the right kind of formula. Those little things come out of nowhere that force you to spend a lot of money on things that you need every day. It can be expensive, and not everyone has the luxury to be able to afford those things. That's why it made sense for us to be part of this.

What are you looking forward to in 2017, now that you have to children?

Kevin: Well, I think it's a little crazy, because we're starting to look at schools for Alena, and we have a second now. There's a lot of interesting life changes for us happening every single day. But, to be completely honest, we're just excited that we have the love from our family and that constant support system.