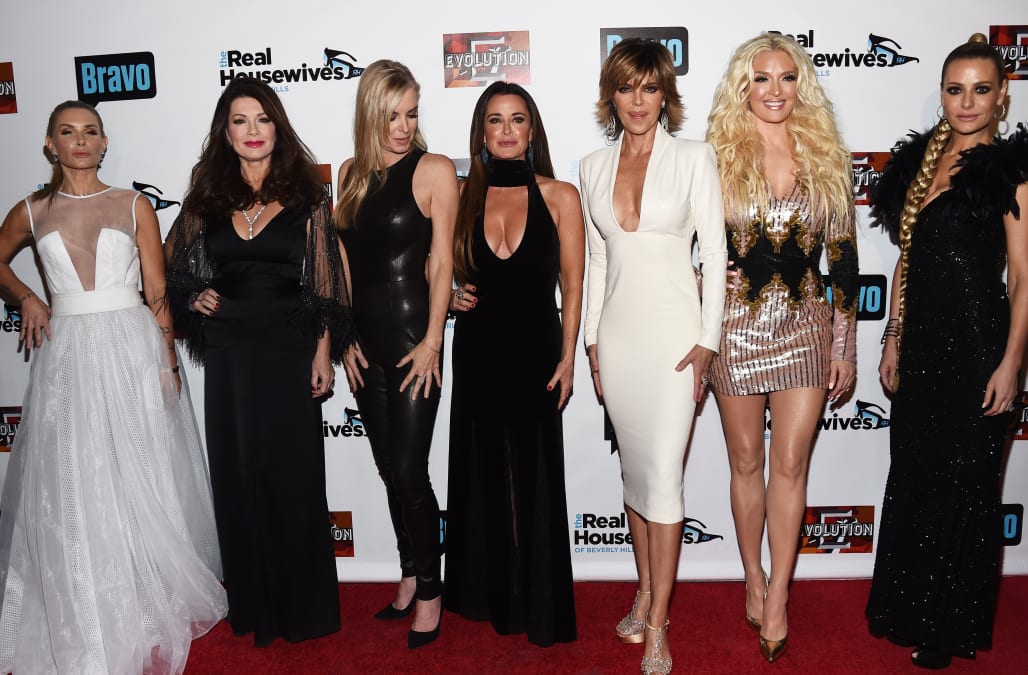 Eden Sassoon was more than ready to jump into the action on the seventh season of Bravo's "Real Housewives of Beverly Hills." As one of the two new cast members this season, Sassoon will have the spotlight on her as she enters the show in January, as all new "Real Housewives" do," but she's more than up for the challenge.

Regardless of all that she has going on in her life, Sassoon maintains that she is -- and always will be -- an open book both off camera and on. I recently caught up with the newest "Real Housewives" star to talk about why she decided to join the show, whether or not she had any anxiety about it and what we can expect from the show's seventh season, which is being dubbed a "new chapter."

Tune in to "Real Housewives of Beverly Hills" every Tuesday at 9 p.m. EST on Bravo.

See photos of Eden Sassoon out and about:

Check out my full conversation with Eden Sassoon below:

Congrats on the new gig as a "Real Housewife!" What was the process like of joining the show?

[Lisa] Rinna and I were kind of friends via two degrees of separation, and it was a very natural progression. She had come into [my] studio for pilates, and we had mutual doctors and things, and it was just, like, "Hey! Do you want to come hang out and do this?" At this point in my life, I'm open to anything that comes my way, because I think there's a lesson to learn in everything. So, I said yes, and here we are!

Were you a "Real Housewives" fan before you signed on? How much of the show had you seen?

To be honest, no. My kids are 10 and 11, my father passed four years ago, I've been sober for four years, I have three businesses and a non-profit and I'm single! You can imagine the amount of time that is spent in life versus getting in and watching six or seven other women's lives. I really had to focus on my life.

Of course, being in Beverly Hills you hear what's going on, and I have watched a couple of episodes in the past, but last year for me, to be honest, was hurtful. There were things that went on that had me going, "What goes on here?! This is really disturbing and upsetting!" That was kind of my past feeling about the show.

Considering that you had only really heard negative things about the franchise, did you have any anxiety about joining the cast?

No, I'm one to live in each moment and bring myself [to the situation] and be present, so I just thought, "Let's do this completely." And If I stay true to who I am, then I feel that the energy can shift. Whatever it is that I'm up against, if I am me, then no matter what the energy can shift. That's just how life is. So, I was willing and ready to take on whatever I was going to be faced with.

As you said, you have two relatively young children, you're sober, you run multiple businesses and you're not tied down in a relationship. Was there anything you didn't want to show?

I'm an open book. I think that that was one thing that everyone enjoyed in the process of getting to, "hey, we like Eden!" because I've always been an open book and allowed people to peel off the layers of really getting to know who I am. In this journey that we call life, we're all individuals, yet we're all a collective; to me it's important to embrace that oneness. To me, if I'm sharing my life, I'm helping others. If others share and they're on a different level than I am, then they impact my life, too. When eople can really share goodness, it's important. I'm -- sometimes too often -- an open book.

Was that another reason why you decided to join the show? To be a voice for certain people out there that might not have one?

Yes. My intention is to just think about it as an opportunity to spend time with a beautiful group of women, [while also knowing that] there's now a whole other platform for me to have a voice of integrity and share what I have been through and what I know to be true and then continue to learn every single day with whoever is listening.

How was the filming process different from how you expected it to be?

I don't expect anything. You're with the ladies at all different times, and I didn't really ever feel as if there were even cameras around. When we were at lunch or pilates or a party -- even in those intense moments there -- it was us and in the moment and real. It was me being me and who I am. It was natural, as strange as that sounds.

I'm always like, "How do actors and actresses do it?" It's hard enough to be yourself and get to know yourself, much less having to play a character. To be yourself in a situation with cameras all around and have it play on a screen around the world, to me it's like, "Thank you!" because I've really become more connected with her -- with Eden.

Are we also going to be taken inside your multiple businesses and see how you operate professionally?

No, you're going to see some of how I operate professionally, but my father always taught me, "You're only as good as your team." So, I stay calm and healthy and myself by having a really good team in place. My salon has two people that run it, my studio has [a] director and I oversee everything. But, I need my life and my sanity, and I choose how I want to live that life. So you see exactly that, and I don't claim to be anything that I'm not. I don't sit in the salon, I don't check people in and out, I go and I'm myself and I really engage in my clients' day-to-day emotional state [instead].

You mentioned your journey of getting to know yourself. What's one thing you learned about yourself because of your experience on "Real Housewives"?

In the last six months, I've learned more about myself than ever before. I've been sober for four years, but in six months it was like a crash course. As we'll see, there was a real moment between Kim, Kyle and me, and it was a really intense story. That's what I'm faced with [every day], though, so it's a mirror straight in front of yourself, and you can't get out of it. In that regard, it's really hard, and you have to be willing and ready to honor that journey. You have to be strong and ready to jump in and be committed to this experience alongside strong women, all of whom have their own thing going on.

Everything happens for a reason, and it's obvious that this came at the right time in my life.

Something that I love about "Real Housewives" -- that's underrated -- is that you get a real chance to put your charitable work on display and raise awareness for certain causes through the events you attend. Was that important for you to do?

I believe as individuals, we are here for a purpose, and that's what I do with Beauty Gives Back -- I unite the industry. [You have to] find what it is within you, because we aren't selfish human beings, but we do need to learn to be selfless. I used to go to my father and [complain], and he would tap me on the shoulder and say, "Darling, go do something for someone else." A.K.A., "Shut up, get over it and go help someone." And he was absolutely right.

[The show] is about showing people that it's about more than what you see and the life that we live, but I do my best to give back to everything I can. It's really about waking people up to realizing what they are capable of doing on whatever level and raising awareness for what you believe in.

Finally, what can you tease for us about the upcoming season of "Real Housewives of Beverly Hills"?

You know, coming off of what I saw from last year, it's a healing, exciting journey [this year]. Go on the ride with us, because that's what it is. It's a ride from the moment it starts -- and, again, I come in January -- and it's a ride to the minute it ends. I think that you'll be surprised as to what comes up; it's exciting. To see some that weren't in the place of being open and vulnerable, and then getting to that place, it's really colorful. This year, it's a new chapter. It got that title for a reason.

More from AOL.com:
John Krasinski on pursuing directing after 'The Hollars': 'I know I have to earn it'
Kristin Cavallari on the one-year anniversary of her brother's death: 'I will see him again'
Carly Rae Jepsen is going 'so many places' with the follow-up to the critically-acclaimed, 'EMOTION'