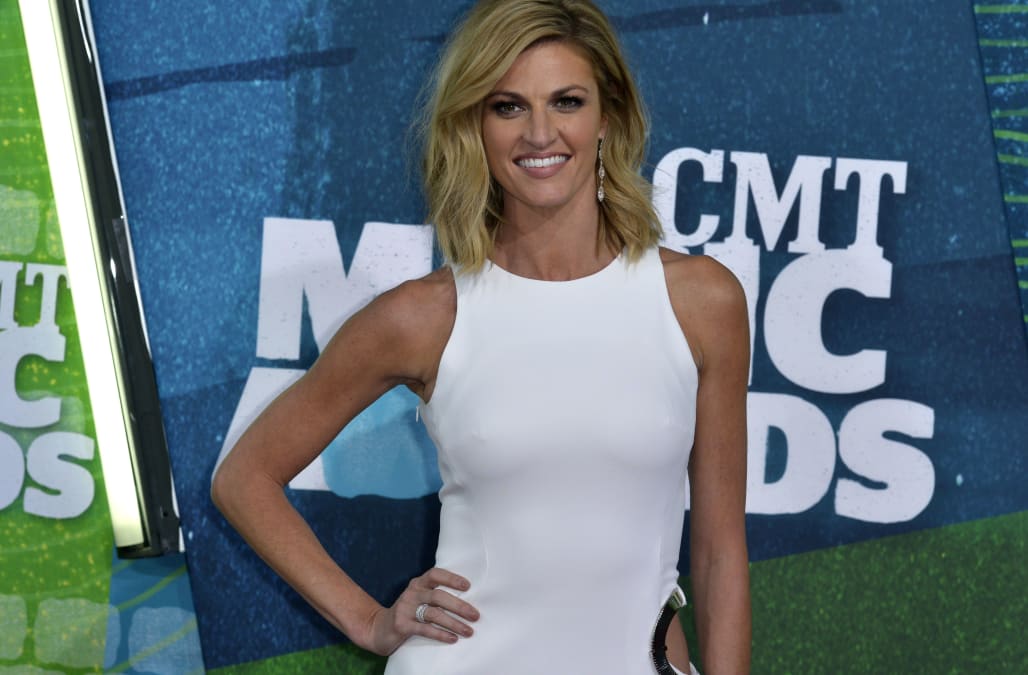 Rumors have been flying that Erin Andrews is engaged to her boyfriend, NHL player Jarret Stoll -- but the Dancing With the Stars host had been fairly quiet on the matter -- until now.

In several recent social media posts, Andrews, 38, subtly implied that the rumors may just be true.

The first, which helped kick the rumor mill into high gear on Thursday, featured a screenshot of a weather report, with the Fox NFL sideline reporter referring to her "ring game" in the caption. "This weather at Lambeau is really going to put a damper on my ring game @jarretstoll."

This weather at Lambeau is really going to put a damper on my ring game @jarretstollpic.twitter.com/9DD8RvTjuv

Those responding with congratulatory messages on Twitter and Instagram included Andrews' Fox Sports colleague, Charissa Thompson, and past and present wives of Stoll's L.A. Kings teammates.

The second cryptic kinda-sorta confirmation came a few hours later, in response to a query from DWTS pro Emma Slater.

"What?!!!! Would you happen to be engaged @ErinAndrews ??!!!! I'm hearing people on Twitter!!!," Slater tweeted, to which Andrews responded with several heart and kiss-blowing emojis.

Andrews also responded with an emoji to a fan's tweet that stated, "I love how @ErinAndrews is kinda hinting at her engagement and it goes over everyone's heads! So happy for her!!"

However, the sparkler that can be seen decorating Andrews' left hand during her interview with Seattle Seahawks player Richard Sherman is pretty much all the confirmation the internet needs! >

ET has reached out to Andrews' reps for confirmation.

Earlier this year, Andrews was awarded $55 million in a civil trial that stemmed from an incident where she was unknowingly videotaped in her hotel room. Find out what went on in the video above.

Swimmer Michael Phelps secretly tied the knot in July with Nicole Johnson before the Rio Olympics. Phelps managed to keep their wedding a secret for five months!

Mark Ballas and his ladylove BC Jean exchanged "I do's" in a gorgeous Malibu ceremony. The "Dancing With the Stars" pro looked handsome in a navy suit while his bride looked lovely in an embroidered gown.

"Teen Mom" star Maci Bookout got hitched to Taylor McKinney. Of course, the whole ceremony was filmed for the whole world to see.

Things may not have worked out for Nikki Ferrell on "The Bachelor," but she got a second chance at a happily ever after with her new husband Tyler VanLoo. They tied the knot in Kansas City, Missouri, in October.

"Pitch Perfect" Anna Camp tied the knot with her hubby in a romantic California vineyard wedding in early September.

Eva Longoria describe her Mexico nuptials to Jose Baston as the "happiest day" of her life. The cute couple got married in late May.

Love was definitely in the air on the "Empire" set this year! Co-stars Trai Byers and Grace Gealey secretly got hitched in the Caribbean.

Shawn Johnson may have some gold medals under her belt, but her wedding ring definitely takes the cake! She and Andrew East said their "I do's" in a romantic, rustic wedding in April.

Comedian Kevin Hart got married to Eniko Parrish in a fairytale wedding. They made it official in front of their closest friends and family in Santa Barbara in August.

"Rich Kids of Beverly Hills" stars Morgan Stewart and Brendan Fitzpatrick said 'I do' in a gorgeous California ceremony in June.

Another "Dancing With the Stars" wedding! Pro dancer Kym Johnson sealed the deal with Robert Herjavec in a dreamy ceremony in August. The blonde bombshell looked stunning in a strapless wedding gown!

Lyndsy Fonseca and Noah Bean said "I do" in front of 160 guests in Connecticut. The "Nikkita" co-stars couldn't have looked more perfect on their special day, don't you agree?

The stars of "Duck Dynasty" don't hold back when it comes to weddings! Reed Robertson married his high school sweetheart in a rustic-chic outdoor wedding. By the looks of this picture they look totally in love!

Lovers in Paris! "The Real" host Adrienne Bailon wed gospel singer Israel Houghton in the City of Love. The couple looked totally loved up in a series of photos of their big day she shared in on Instagram.

Actress Jamie-Lynn Sigler got married to pro baseball player Cutter Dykstra after dating for almost three years! Sigler described their wedding as "laid back" -- and that's evident by the looks of this adorable photo of the two.

"The Office" star Angela Kinsey tied the knot with her longtime lover Joshua Snyder. The actress turned heads in a stunning J. Crew dress, which was fitting for the intimate California ceremony.

Courtney Anne Mitchell and actor Corey Feldman tied the knot in an unexpected Las Vegas wedding just a couple weeks after announcing their engagement! He reportedly proposed with a hand-written note that asked: "Will you marry me?"