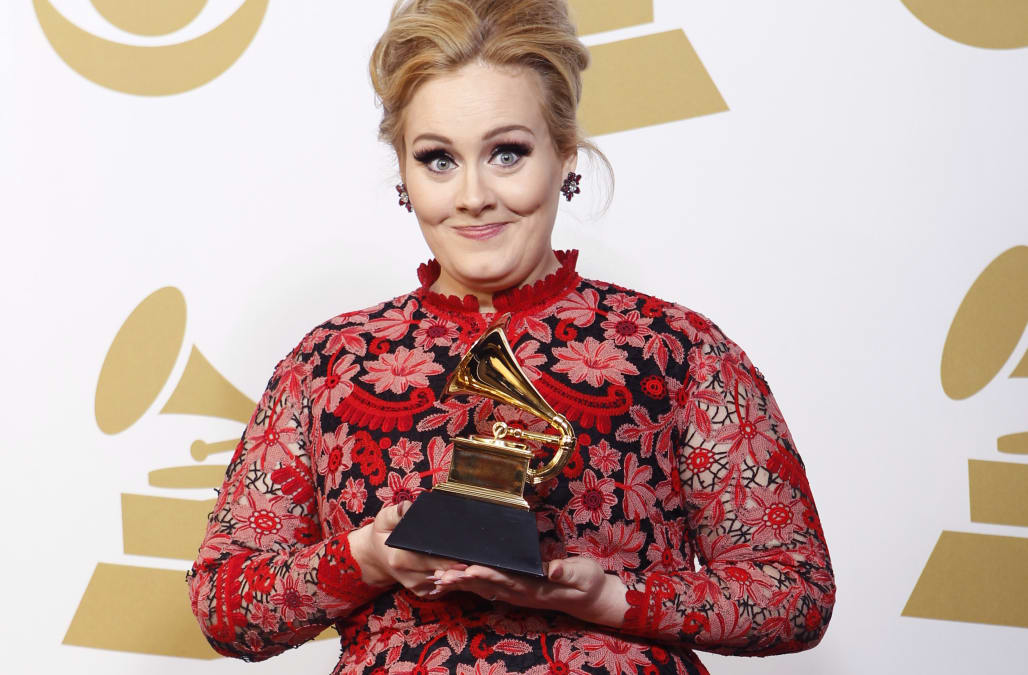 Adele and Beyonce ruled the nominations for the 59th Grammy Awards' top categories with album, record, and song of the year noms. Adele's "Hello" from her third studio album, "make-up record" "25," and Beyonce's "Formation" from her sixth studio album, the politically charged visual album "Lemonade," ruled the roost.

Taylor Swift, who's the favorite to win Album of the Year, showed off her slim figured in this two-piece, two-toned look. She put her leg on display Angelina Jolie-style and even debuted a new bob and bangs hairdo.

Selena Gomez, who was Taylor Swift's date, showed up in a figure-hugging, sparkler of a dress with cutouts on either side. She also debuted a slightly lighter chocolate hair color.

Lady Gaga paid the ultimate tribute to David Bowie in a Ziggy Stardust ensemble. The blue dress, red heels and bright hair made us miss Bowie even more than we already do. Well done, Gaga. (Photo credit should read VALERIE MACON/AFP/Getty Images)

Country megastar Carrie Underwood went for it with this black satin strapless look. Her sculpted leg was on display and she paired the look with a giant diamond and ruby necklace.

Well hello there, Justin Bieber! The "Sorry" singer went for basic black for the red carpet, which really made his hair pop. The only problem? His facial hair needs to go. (Photo by John Shearer/WireImage)

Adele didn't stray from her favorite color and rocked a classic black dress with sparkling details. She made the otherwise sweet look more bold with a choppy haircut. (Photo by Jeff Vespa/WireImage)
LOS ANGELES, CA - FEBRUARY 15: Singer/songwriter BeyoncÃ© attends The 58th GRAMMY Awards at Staples Center on February 15, 2016 in Los Angeles, California. (Photo by Mark Davis/WireImage)
Meghan Trainor sparkled in a black dress with long sleeves, bold shoulders and a cinched waistline. She finished off the the look with her bright new locks and a gold clutch.  (Photo by Steve Granitz/WireImage)
Way to keep it low-key, Pharrell. The singer and his wife went for funky but cool looks for the big night and their more casual dresscode. (Photo by Jason Merritt/Getty Images for NARAS)
Now that's a lot of leg! Ciara showed exactly what she's working with in a jaw-dropping gown that had a serious side-slit. The up-to-there slit combined with the very low back and side were wowza! (Photo by Steve Granitz/WireImage)
Wow! Sam Smith looked more slick than ever in a tuxedo that showed off his massive weight loss. We can't get enough of his dapper look. (Photo by Jason Merritt/Getty Images for NARAS)
Little Big Town know a little thing about dressing up for big award shows. The Grammy winners went for neutrals except for Kimberly Shlapman with her color block look. (Photo credit should read VALERIE MACON/AFP/Getty Images)
Wow! Hot mama Chrissy Teigen nailed the red carpet with a white gown with a sparkly cape. She polished off the look with slicked back locks. (Photo credit should read VALERIE MACON/AFP/Getty Images)

Songwriter Diane Warren kept it über casual in black trousers and suit jacket paired with a blouse covered in a fun CD print.

Tony Bennett was a class act in his simple suit and striped tie. (Photo by Lester Cohen/WireImage)
The jury is out on Wiz Khalifa's too short pants and cropped tuxedo jacket paired with Chucks. What do you think of his look? (Photo by John Shearer/WireImage)

Hot hot hot! Ellie Goulding looked simple and sexy in this pale pink dress with a diamond back.

Nominee Ashley Monroe rocked a flowy teal gown with draped sides. The giant cutout in the middle of her chest showed off her cleavage.

Kacey Musgraves mixed it up with this textured purple, royal blue and turquoise dress. We darker hair and makeup completed the memorable look.

Zendaya hit the show rocking a mullet and a double-breasted black tuxedo. We're not a huge fan of the basic look, but points for originality. (Photo by Lester Cohen/WireImage)

Josh Groban rocked a dark suit and tie on the carpet, sporting a thick beard as well.

Red hot! Ariana Grande went for a simple gown with a balconet top and a link train. The simple look was sweet and sophisticated. (Photo by Kevin Mazur/WireImage)
Nominee Charlie Puth looked snazzy in a black sparkly suit. (Photo by Steve Granitz/WireImage)
Janelle Monae looked jailbird chic with a tiny striped hat and skirt and blouse. We can't decide what is wrong with this look -- except for really everything.  (Photo by Steve Granitz/WireImage)

Jack Antonoff of fun. and the Bleachers, who's dating Lena Dunham, rocked a two-tone tux and messy hair. The nerdy-chic look works.

Denise Donatelli looked beautiful in this long-sleeved gown with faux slits down the side.

Vanessa Lachey's LBD seems okay at first and then you look at where that sheer actually starts and ends and you realize it is thisclose to a wardrobe malfunction.  (Photo credit should read VALERIE MACON/AFP/Getty Images)

Mark Ronson, the mastermind behind "Uptown Funk," and Josephine de la Baume kept it cool on the red carpet in black and navy looks. Ronson kept his shades on because duh.

Brandi Carlile thought she was going to Coachella, rocking peep-toe booties, a black jumpsuit and matching black hat. The pockets added an extra air of comfort to the laid back look.

Diana Gloster thought the Grammys was a theme party, rocking a black and white gown adorned with music notes.

YouTube sensation Tyler Oakley looked dapper in a navy suit and black shirt. He opted to forgo a tie or bowtie.

Recording artist Bonnie McKee forgot her shirt in this sparkling, cleavage-baring suit. Topping off the look? Her pink hair.

Singer-songwriter Sam Tsui kept is casual in an off-white bomber jacket and black and white printed button down.

DJ Michelle Pesce rocked this figure-hugging long-sleeved gown that reflected the lights on the carpet.

Recording artist Kid Harpoon kept his shades on and sported a navy suit.

MC Lyte rocked the boat in this textured mini-dress with a high neckline and even higher hairdo.

Skylar Grey turned heads in this sheer black look with embroidered faces on the front, dark eye makeup and a top bun. We're getting serious gothic bride vibes with this one.

What in the world? Musician Gary Clark Jr. and model Nicole Trunfio hit the red carpet and it's safe to say that Nicole stole the show with her wild jumpsuit. The skintight look, with butterfly sleeves, and a plunging neckline was all wrong.. (Photo by Steve Granitz/WireImage)

Singer Kendra Foster looked like she was having fun in this over-the-top white jumpsuit with major shoulder layering.

There are no words to describe Ghost's nightmarish medieval group costume.

A capella group Pentatonix embraced their colorful personalities with their all over the place group outfit. There's a lot going on in this coordinated black, white and orange look.

Dencia showed up looking like a hip-hop baby doll in this bejeweled pink onesie and major heels.

It's going to be hard to forget this space disco outfit from Manika. We're getting serious 2009 Lady Gaga vibes from this one.

Nominee The Weeknd looked dapper in this all-black tuxedo.

Best New Artist nominee James Bay put a hipster spin on this skinny-legged tuxedo that he wore with chelsea boots.

Model of the moment Bella Hadid looked sleek and sexy in this all black dress. Her slicked back hair and dark makeup completed the look.

LOS ANGELES, CA - FEBRUARY 15: Recording artist Andra Day attends The 58th GRAMMY Awards at Staples Center on February 15, 2016 in Los Angeles, California. (Photo by Steve Granitz/WireImage)
Furry isn't a good thing! Faith Evans went for a classic black and white gown, but the one side with a full fur stole is a little wild. Pun intended.  (Photo by Jason Merritt/Getty Images for NARAS)
"Burning House" singer Cam rocked a yellow gown from Chakra that was totally demure and sweet up top and totally wild on the bottom. The look resembles a lemon cream pie, don't you think? (Photo by Larry Busacca/Getty Images for NARAS)
Listen -- wearing a bunch of metal-like thorns as a dress is just asking for all the wrong attention. Add an outrageous hat, a weird train and a sparkly thong and you have Joy Villa's random outfit. (Photo by Lester Cohen/WireImage)
Dana Sano paired navy, black and sheer and ruffles for a contemporary look. (Photo by John Shearer/WireImage)

Demi Lovato rocked a classic black ensemble with a low-plunging blazer and a skirt with a thigh-hight front slit. It's a simple look but we like that.

Host LL Cool J got jazzed up in a tux and escorted his lady Simone Smith, who dazzled in a purple frock.

Here are the nominees unveiled so far for the 59th Annual Grammy Awards.

Best R&B Performance:
"Turnin' Me Up" — BJ The Chicago Kid
"Permission" — Ro James
"I Do" — Musiq Soulchild
"Needed Me" — Rihanna
"Cranes In The Sky" — Solange