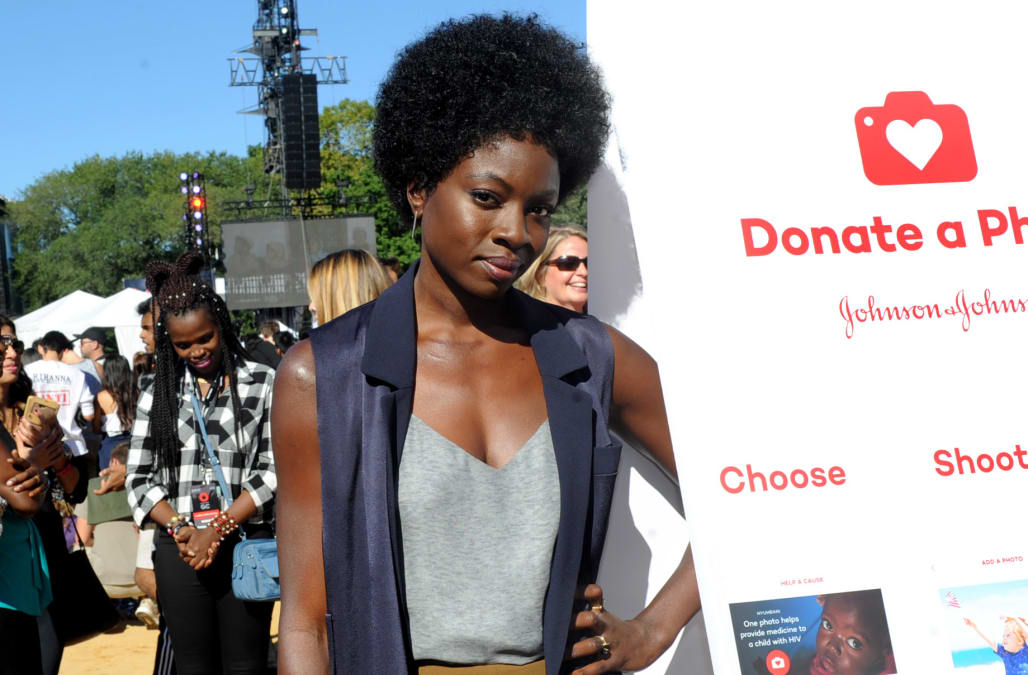 Growing up in Zimbabwe in the 1980s, "The Walking Dead" star Danai Gurira saw first-hand how the HIV/AIDS epidemic can tear communities large and small apart. Because she's so aware of the devastating effects of the virus, which infects over 2 million people every year, Gurira is on a mission to spread awareness about it all around the world.

In partnership with Johnson & Johnson's Global Health Initiative, the actress will educate citizens of the world on the potentially fatal effects of HIV/AIDS, with special attention being paid to the cause on Dec. 1, or World AIDS Day.

Through the inspiring collaboration, Danai and J&J produced a video titled "I Was There," which highlights how the organization Nyumbani is flipping the script for children and HIV/AIDS by bringing education, medication and clean water to areas in need.

I caught up with Danai Gurira over the phone while she was in between takes of her hit series "The Walking Dead" to talk about her fight to find a cure for HIV/AIDS, why awareness is so important to the cause and the massive changes she has seen since her years of growing up in Zimbabwe.

See photos of Danai Gurira out and about:

21 PHOTOS
Danai Gurira out and about
See Gallery

Check out my full conversation with Danai Gurira below:

You're partnering with Johnson & Johnson's Global Health Initiative for World AIDS Day. Tell me about the partnership and how it came about.

I also partnered with them during the Global Citizen Concert, and it's really been about a mutual interest. I've always been very connected to the issue of HIV/AIDS, simply because I am a Zimbabwean-American. I was raised in Zimbabwe, and I experienced the epidemic when it hit in the '80s. I really saw how it could change the tapestry of a nation and a community. I saw families and friends torn apart, and my country and the other parts of the continent have really had to adjust to the massive blow of this epidemic, while also getting through it.

Johnson & Johnson have been very much part of working towards ending this issue on the continent in very sustainable ways, and they work specifically with this fantastic organization called Nyumbani. Nyumbani was really special to me because it deals so specifically with children, and that's really where you see such a blow happen with HIV/AIDS: When children lose their parents. Even when I was growing up, I saw family friends where the father, or the breadwinner, was "sick" -- that's what people said -- which shifts the whole nature of that family in a way that they may never recover from.

I really appreciate what Nyumbani does, and it being World AIDS Day on the first of December, it's really a time to give voice to the fact that, though there have been strides made in the issue of HIV/AIDS globally, it is by no means something that we're at the end of. We're still in a time where 37 million people currently live with this illness, and 2.1 million people become newly infected with it every year. So, we're still at a time where we're grappling with this problem, and Nyumbani really works to allow children to have a sustained life, pursue their dreams, get support, live in family structures beyond having been affected by HIV, and receive life-saving drugs.

We created a video that I'm narrate, and I'm really speaking from the heart of the matter for me: I'm talking about the wonderful experience that these children get to have being in a multi-protective community and contextualizing how HIV can jeopardize our future, which is, of course, our children.

That's really how the partnership came about: It was very organic, in the sense that the sustainable work that J&J does around this issue really advocates for more of us to become aware and get connected. If you go to JnJ.com, for instance, you can learn more about World AIDS Day. Sometimes folks don't realize that this day really does bring awareness, which is crucial because HIV/AIDS is not over.

Through your advocacy work, have you found that that is the biggest misconception around HIV/AIDS? That people who aren't directly affected by it believe it to be more or less taken care of already?

I think that's very specific to the US, because there's still an awareness of it on the continent; it is still so present there. There are ways that Eastern Africa has begun to grapple with the stigma and the differences, now that medications have allowed people to live much longer, productive lives with this illness. I think the US, though, I've definitely noticed that more.

So, I do feel as though in the United States the awareness of it can be a little less than in other places, which is concerning because 1.2 million people in the United States are living with HIV -- and 1 in 8 of them don't know it. We do need to pay more attention to this issue globally, not just in Africa.

You mentioned the fact that you were raised in Zimbabwe and how much you saw HIV/AIDS affect those around you in the '80s. What differences do you see when you go back to Zimbabwe now, in terms of how HIV/AIDS is perceived and treated.

The difference is that there is a more open awareness about it. The stigma issue isn't as prominent, and it used to be so massive. The ability to accept people and to know and accept someone with the illness, with the understanding that they're still living a full, productive life is new. They have access to very effective medication, too. So, there's no strained stigma to those individuals. It can be very out in the open, and everyone can know about it. It's not something that takes away from someone's livelihood or their relationships with others, and that's a massive difference that I've witnessed.

Finally, what's something easy that anyone reading this can do on World AIDS Day to help spread awareness?

The first thing I always say is, "Awareness, awareness, awareness." The more aware you are, the more your heart will want to be continually aware and really connected to the issue. The other thing is, if you go to JnJ.com, you can download the free Donate a Photo app, and when you donate a photo through the app, Johnson & Johnson will share $1 to one of its trusted non-profit partners, chosen by you. That's a direct way that anybody can make a difference!

More from AOL.com:
Ashley Benson talks wrapping 'Pretty Little Liars,' giving back and what she plans on doing next
Kaitlyn Bristowe and Shawn Booth of 'The Bachelorette' talk their relationship, giving back and waiting to get married
Everything you need to know about awards season swag bags from gift lounge connoisseur Gavin Keilly