Alx Veliz is a Toronto-based artist signed to a worldwide deal with Universal Music Group (Island Records/ UMLE / UMC). The music video (above) for his new single "U+Me" is visually stunning. Here's 10 things you need to know about the next big thing, singer-songwriter Alx Veliz: 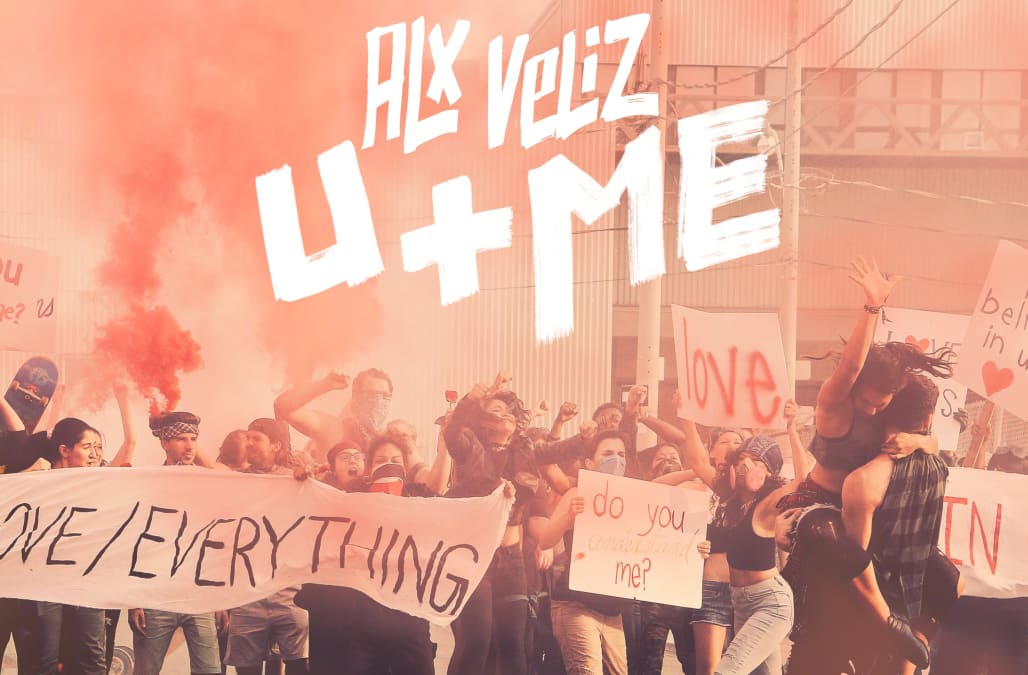 1. Alx is interested in impacting positive change, not pleasing people.

A love song on the surface, "U+Me" became so much more when it was time to make the video. "When we were working on the song lyrically-wise it was to be interpreted as a love song. A love song between a man and a woman. But, I just felt, as an artist, we have a voice to go beyond just what you think people want to hear. You have an opportunity to make a positive change in the world. So when it came down to making the music video I decided 'you know what? why don't we just switch it and make it about what we're going through as a society and a culture nowadays.' Just trying to be a voice, trying to bring positivity to the world. That's how we came up with the concept with the video."

2. Alx believes love will save us all.

"It's not so much a rebellion, it goes a lot more beyond that. What I wanted to accomplish through it was that there's still a group of people that believe that love surpasses all things. Once we can get to love each other once again we'll begin to respect each other and look at everybody through the same color lens."

3. Growing up in Toronto helped shape his multicultural sound.

"Toronto's such a multicultural place when it comes down to culture and music. Walking down the street you're going to hear everything. You're going to hear Indian music, Chinese music, African music, so it's just, I think you can hear that through my music. 'Dancing Kizomba' has an Indian guitar, African drum, Latin rhythm and it has that pop R&B melody. I think that is the best description of what Toronto is."

Alx's top markets are Spain, Mexico, Argentina, U.S, Chile, Canada, Colombia. In Spain, fans used the song-identifying app Shazam to get more information on "Dancing Kizomba" over 70,000 times. The Spanish verison of the "Dancing Kizomba" music video has almost 2 million views. The English verison has over 700,000.

5. Like many fans, "Dancing Kizomba" was his first exposure to the genre.

Kizomba is the hottest dance craze in decades, already taught in every dance studio worldwide and now ready to go mainstream. "One of the biggest lessons, or, instruments/genres was kizomba. Originally, when we came up with 'Dancing Kizomba' I had no idea kizomba was a genre of music. I didn't even know it existed. It was my producer who educated me and that's how the song came about."

6. He writes songs for other people, too.

In addition to Universal, Alx is signed to Disney/Hollywood Records. "I'm constantly writing for other artists or TV shows, movies and stuff like that. I think I enjoy that part of the job. I love writing for other people. It allows me to get into a space, maybe I wouldn't write a song for myself in that certain way, but it gives me the opportunity to explore those avenues and write it for somebody else."

Alx Veliz and his latest single
Up Next

7. There are so many artists he aspires to collaborate with.

Here's what Alx had to say when AOL.com asked who he'd like to work with: "Oh man, there's so many. There's so many. I guess you could say, obviously, Bruno Mars for me is a genius when it comes to music. Justin Timberlake is another one that I would love to. When it comes down to production: Major Lazer, Diplo. So many! Journey, Justin Bieber. So many. I think those are the primary ones that you know, I hope to meet one day and show them a couple things I have up my sleeve for them."

8. Music runs in the family.

"On my mom's side, almost everybody is musical, I have a cousin who is the main singer for a Christian band. I have another cousin who is an orchestra director in Guatemala, one of Guatemala's biggest orchestras. I have always been surrounded by musicians and music overall."

"It feels amazing. Just knowing that people are enjoying your art form in which you created for them is an amazing feeling. You feel like you're accomplishing your mission."

10. Finishing his album is the top priority right now.

Is a tour in the future? "Hopefully next summer." Alx loves performing live and "being able to connect with the fans." Right now, his focus is on finishing the album.