Andy Cohen opens up about melanoma scare, thanks Kelly Ripa for convincing him to see a doctor 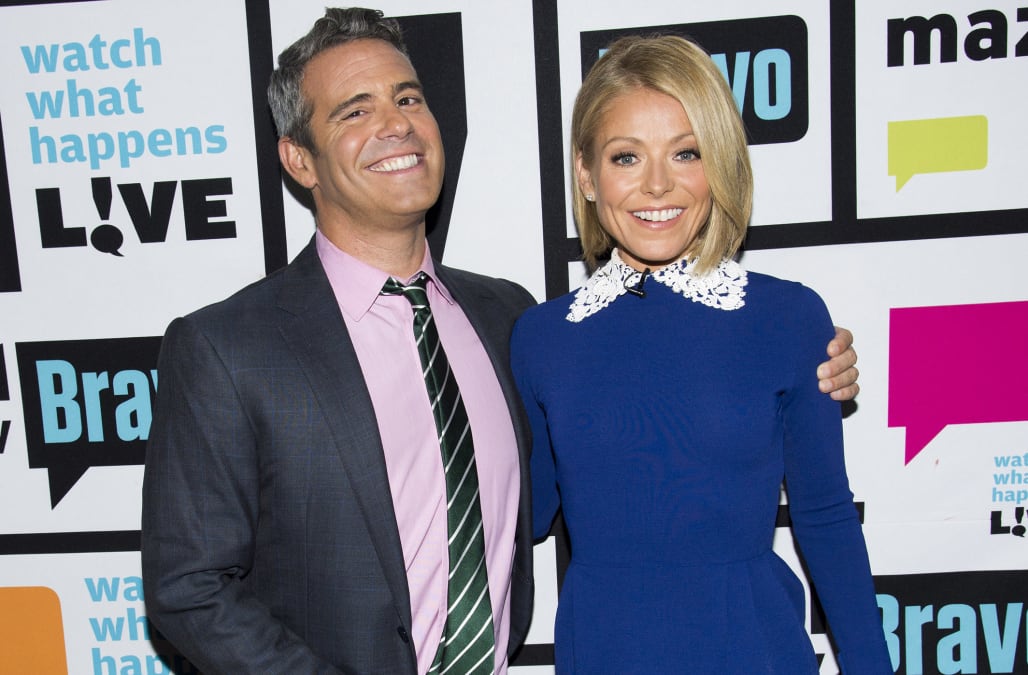 The Watch What Happens Live! host sat down with Ripa as a guest host on Friday's Live!, where he revealed that he was recently diagnosed with melanoma, and said that the skin cancer was discovered after Ripa gave him some good advice.

"You and I were at a party for Anderson's [Cooper] mom in April, and you said, 'You have a black dot on your lip, I don't think that's something good,'" Cohen recounted.

The talk show host admitted that he was hesitant to go to a doctor at first, thinking the dot was nothing, but said that Ripa and her husband, Mark Consuelos, continued to pressure him into getting it checked out -- which may have saved his life.

See photos of Andy Cohen through the years:

Andy Cohen Instagrams
I'm teaming up with @Budweiser to help put a stop to drunk driving. Comment using #GiveADamn, and they'll put $1 for Safe Ride Programs. @Budweiser and Helen slay this important message: http://bit.ly/giveadamn_20
#RHONY PREMIERE NIGHT CROSS-EYED SELFIE! Dorinda, Lu, Sonja & the newest Real Housewife of NYC, Jules! Catch them tonight at 9 and I'm live w/ Bethenny right after on #WWHL
Check out my @radioandysxm Town Hall with @camerondiaz tomorrow morning and On Demand on the Sirius app!
If loving this mustache is wrong then I don't wanna be right. And I'm in the middle of shaving so you won't see it again -- haters need not comment!! 👍🎉👊🏼
GREAT BOOK ALERT! #therainbowcomesandgoes is a beautiful book that will resonate for all generations, especially mothers & their sons. It's by @andersoncooper & his mom #GloriaVanderbilt - riveting, touching, dishy, funny and surprising. And a great Mother's Day gift! It's out today!
Nene joins the reunion tonight -- It's a really dramatic conclusion!! #RHOA
Reunited #DogLove #AdoptDontShop
AC2 in NEW ORLEANS (6/24) & AUSTIN (6/25)! tickets on sale NOW! Go to AC2Live.com for more info!
Balancing act over Mustique ☀️
Truth be told, this bunny rabbit is scaring the crap outta me 🐰
Sheree! Phaedra! Porsha! #WWHL at 11!
Scarface Miami for @brucebozzi 50 #BB50
A birthday hug for @sarahjessicaparker! Always a dream date with you 💗💗💗💗💗
This is gonna be GREAT!!! Rachel Dratch & @theprettymess live! SPECIAL TIME -- 10pm! #WWHL
God Loves a Terrier! And I love Catherine O'Hara & Eugene Levy! #WWHL
It's @broadcity night on #WWHL - can't WAIT for @ilanusglazer & @abbijacobson to peg us all!! At 11!
Crashed a wedding in Santa Barbara on my way to the pool! 12 Groomsmen! #jollycaliwedding
AC2 in the OC! See ya tonight, Costa Mesa! Still some tickets for Santa Barbara tomorrow night! AC2Live.com
Tina Fey tells me a thing or two at 11! She's here with Kim Barker, the reporter she plays in her new flick! #WWHL
TONIGHT AT 8:30: One-On-One with Kim Richards.
Didn't realize how badly the Clubhouse needed a Grammy til @chrissyteigen gave me @johnlegend's first (of 10, he won't miss it)! @bravowwhl
1000th EPISODE PRE PARTY! @kchenoweth @chrissyteigen #TheGayShark @therealwacha & more at 11! #WWHL1000
She's real! @jlo is live! #WWHL
Another bucket list moment: played myself on #insideamyschumer today! I can't wait for you guys to see #IASSeason4 in a few months. And thank you, @amyschumer
Go back to 1987 this morning on @radioandysxm when @therealsusanlucci joins me and we hear (for the first time) the interview I did with her in 1987 (I was 19) that changed my life. It is the gayest piece of audio in existence. Live from 10-12 EDT
From the cast of #Friends to @neneleakes - live at 11 on #WWHL
Happening now in West Hollywood, CA ☀️
Happy 15th Anniversary @kellyripa! I loved being a surprise guest today and had I not choked when I came out, would've said how proud I am of you. Nobody does it better!
Olivia Wilde, Ryan Reynolds, Salt N Pepa!!!!! We are gonna bust a move at 11!! #WWHL
Started the day w/ m'mates @Edelman11 & @russelltovey at @JosephAbboud's beautiful show, wearing the designer. I love a Jew in sports! And a blond Brit! #MadeInAmerica #nyfwm #josephabboud #JewsInSports #BlondBrit
Here's the selfie I took with @khloekardashian's butt! It is really something to behold! Proud to have two Kardashian Ass Selfies! #belfie #WWHL
#RHOBH originals live in the Clubhouse! @KyleRichards18 @TheRealCamille #WWHL #pernicious #morallycorrupt #suchaneffinliarcamille
Up Next

"It was melanoma and they removed it, and I just want to thank you because you were so dogmatic," Cohen shared, adding he has healed well in the wake of doctors removing "a chunk" of his lip.

"I never thought that kind of thing would ever happen to me," Cohen said, adding that the experience has changed his "relationship with the sun."

From the sound of it, Ripa's actually got quite the track record when it comes to identifying possible cancerous spots. According to the Live! host, she's already spotted skin cancer on three of her friends.

"I'm glad to see that all that money I spend visiting dermatologists is good for something," Ripa joked. However, she admitted that she doesn't know if she'd be able to notice skin cancer on herself because of how people adjust to incremental changes on their own bodies.

"So make sure you guys be careful in the sun out there," she concluded.