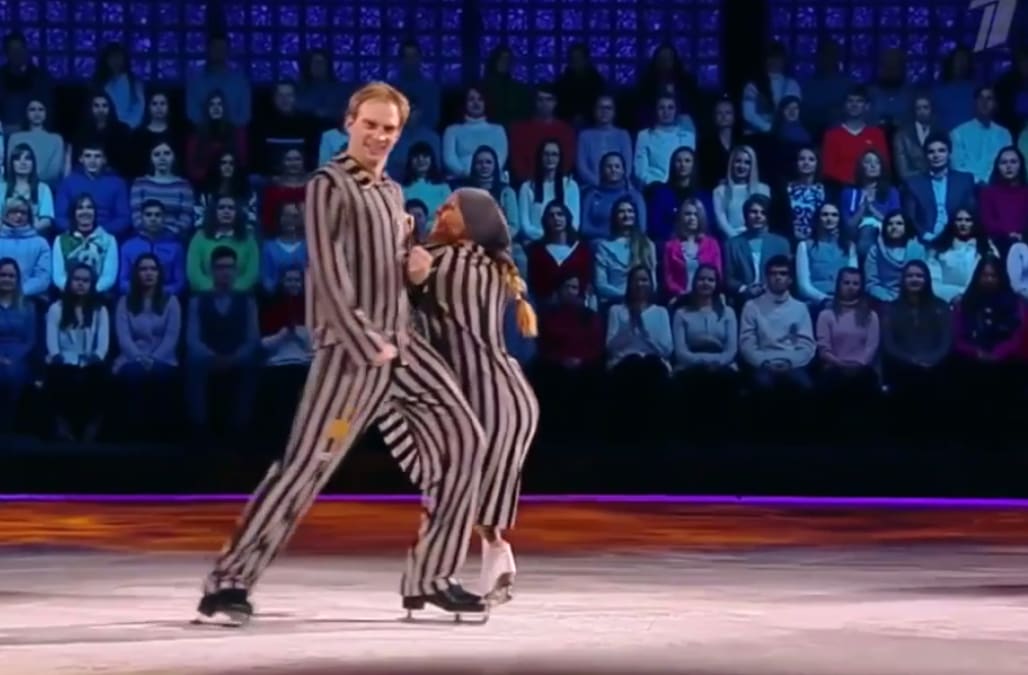 A smiling, playful and yet poignant ice skating performance on Russian national television has created a social media firestorm — because it is holocaust-themed.

Donned in striped pajamas and the Star of David, the couple smiled and frolicked to the tune of "The Beautiful Way," which includes lyrics like, "Smile, no matter what they tell you."

Navka took to Instagram, calling it "one of my favorite performances," but her followers thought something quite different. Twitter reactions to Russian Holocaust-themed skating performance
@yashar I can't close my mouth. It won't let me. I. What are they going to choreograph next, a pogrom? How do you find this stuff, Y?
@yashar Its been 20 minutes and I'm still so horrified. Sometimes I hate the internet. But never before have I hated figure skaters.
@RedSaid you are speaking up for me here. I love figure skating so much... who would believe it could be so ugly? @yashar
@assssssssroight @RedSaid @yashar BULLSHIT, we non-idiots find it atrocious and something that can never be forgotten. Or forgiven!
Up Next

It's just shy of three years that Russian skater Julia Lipnitskaia's gold-medal winning performance to John Williams' theme from "Schindler's List" was knocked in some circles as "Schindler's List: On Ice."

Katarina Witt first started skating to the music in 1994 in homage to Steven Spielberg's film and in remembrance of the Holocaust. The 15-year-old Lipnitskaia, like Witt, dressed in red to recall the girl in red in Spielberg's film: a Polish Jewish girl whose death fills Oskar Schindler with remorse. Her dress provides the only flash of color in the film, and makes her death stand out from all the others, just as it did in Schindler's mind.

More from The Wrap:
New ‘Rogue One’ TV Spot a ‘Dream’ For ‘Star Wars’ Fans (Video)
Deadline Hollywood Executive Editor Michael Cieply Reduces Role After 3 Months (Exclusive)
Inside How ‘Kubo and the Two Strings’ Put Together Biggest Stop-Motion Movie Ever