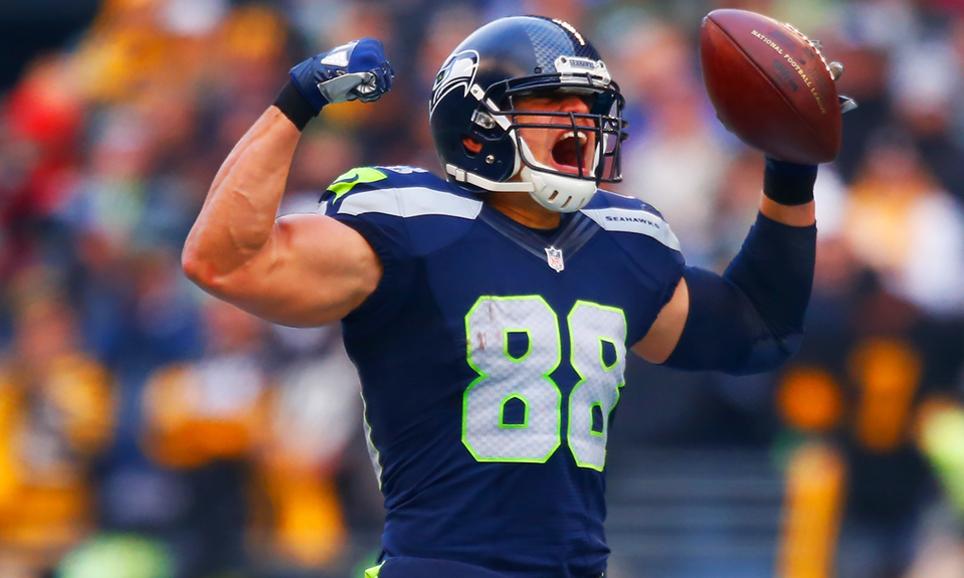 Don't look now, but fantasy football season is right around the corner. Over one week, we'll be previewing the four major positions in fantasy football. Top it off with a list of sleepers at every position on Friday and you'll be ready to go for your draft. We use standard non-PPR scoring for all our rankings.

We all love knowing about the next group of sleepers, but it's the busts that cost you the season. Striking out on a top pick puts you behind the eight ball. You need to be smart about who you're choosing and not just look to what happened last year. Things have changed. Personnel and coaching is different. Make sure you nail your early round picks like the great stickman Vitas Gerulaitis and avoid the guys listed below.

In the last two years, Ben Roethlisberger has played 19 games with Martavis Bryant on the field with him and nine without. In the nine games without Bryant, Big Ben has averaged 5.6 points less than he has with Bryant in the lineup. Martavis Bryant is suspended for the season. (Sorry to go all Matthew Berry on you with these facts.) The Steelers haven't found a way to replace Bryant's impact on the field as dudes like Eli Rodgers and Sammie Coates haven't been able to replace the very average Markus Wheaton.

Take Le'Veon Bell out of the lineup for the first three weeks, move ever-reliable Heath Miller to retirement, and see that Ladarius Green might be out for a while with a concussion issue and you won't feel so good about Ben's hopes this year as you might've originally. Oh, and Ben has missed games in four of the last six seasons. Ben will still be a solid QB, but he's not worth the QB6 spot he's currently being drafted at. Let someone else draft him in that spot.

There were few quarterbacks who did more in garbage time last year than Blake Bortles. Consider that Bortles had two touchdowns in the first quarter of games last year, but 14 in the fourth quarter. That's insane! He also threw for 30 percent more passing yards in the fourth quarter than he did in any other quarter. The problem is the Jaguars are actually better defensively this year and committed a little more to their running game with the addition of Chris Ivory. Bortles isn't a bad quarterback, but the likelihood of him finishing in the top 10 again with the above factors just doesn't bode well.

I saw this stat in Matthew Berry's column the other day that was pretty amazing. Here we go: only one quarterback in history has thrown for 4,000 yards, completed 66 percent or more of his passes, and thrown for less than 29 touchdowns. His name is Matt Ryan and he's done it the last three years!

Unlike Ben Roethlisberger and Eli Manning, Ryan hasn't been able to take advantage of having one of the three best receivers in the league on his roster. Ryan only had one game of more than 20 points last year. By comparison, Ryan Tannehill had four, Tyrod Taylor had six, and Alex Smith had four. Even Alex Smith can give you a higher ceiling than Matt Ryan! The inclusion of Mohamed Sanu helps the lineup, but the Falcons like to run the ball and they have two quality backs to give the rock to. Don't draft Ryan with any hope and there are better backups you can look at as well.

To Ingram's credit, he's come a long way since his rookie year. Ingram has posted 4.0 yards per carry or higher numbers in his last three years after failing to do so in his first two seasons. The problem for Ingram has been staying on the field. Ingram hasn't played more than 13 games in four of his five NFL seasons. He also has failed to reach double-digit touchdowns despite playing in one of the league's best offenses. Ingram is currently being drafted 11th according to data at fantasypros.com. Is it wise to take a running back that high with such a track record for injury? Besides, we know New Orleans is a pass-first team and they still have C.J. Spiller and even Tim Hightower around to steal some work.

It's rather amazing Martin played as well as he did last year given how mediocre Tampa Bay's offensive line was, but contract motivation is a wonderful thing. Look back to what Jonathan Bales wrote about running backs who get contract extensions. It's not looking good for Doug Martin.

Add in an improved Jameis Winston who the team will feel more confident putting their efforts behind and a receiving core that is back to full health. Give me running backs with upside like LeSean McCoy, C.J. Anderson and Latavius Murray over Martin this year.

Chip Kelly is supposed to be a running back whisperer, so what exactly happened to DeMarco Murray last year? And it's really hard for Hyde to be productive when he has so many things working against him. The 49ers quarterback situation is as bad as any in the league and the receivers on the outside certainly don't scare a defense enough to keep eight guys out of the box.

Add in a division with six games against three really tough run defenses. Hyde only had two 10-plus point performances in seven games he played last year before getting hurt. Nothing's changed around him! Hyde's also missed 11 games over two NFL seasons. And you're taking this guy over Jonathan Stewart and Jeremy Langford? C'mon man!

You have to feel bad for both Thomas and teammate Emmanuel Sanders. They're both wasting away their prime with mediocre quarterback play. (They won a Super Bowl last year, but who cares? This is a fantasy football column!) Last year they got stuck with the corpse of Peyton Manning and this year they look to be starting off with college legend Trevor Siemian. Clearly Denver will be focused on running the ball heavily this year and won't take too many shots down the field. The departure of Manning also means less screen passes for Thomas and more roll-outs to the tight end.

Baldwin's explosion last year was a crazy thing -- one you get on occasion as the fantasy season unfolds. Baldwin was known as a nice receiver, but he was never seen as an explosive one. The loss of Marshawn Lynch and Jimmy Graham combined with an unexpected erosion of the Seahawks defense forced Seattle into throwing the ball more often and someone had to catch it.

Baldwin broke out for 12 touchdowns after the bye in Week 9 as opposed to two touchdowns before. Things look back to normal for Seattle now that it's a new season, so a regression is in the cards for Baldwin. He'll likely fall somewhere in the middle of those stats, which doesn't justify his 22nd overall spot in ADP. You're better off shooting with guys like Jeremy Maclin, Eric Decker, Golden Tate, and the aforementioned sleeper Donte Moncrief over Baldwin this year.

If Blake Bortles is dropping off as mentioned above then it's going to have ramifications over the rest of the Jaguars offense. Allen Robinson is still the man as we've seen in preseason this year. His numbers will drop slightly, but he's still going to be the focal point of the passing offense. Julius Thomas is healthy to enter the season, which could make him the second option. If even it doesn't, the health will increase his usage from last year.

That leaves Hurns in a rough spot. With less garbage-time production to go around then Hurns will have to come down to earth a bit. No one's doubting he has some talent, but the opportunity isn't as great as it was last year. Going ahead of Marvin Jones, Michael Crabtree, and Stefon Diggs is just silly.

There's no doubting Reed's talent as it was on full display last year. It was a perfect situation for Reed as he became the number one option in an offense that needed to put up points to mask a terrible defense. The addition of Josh Norman and three other defensive backs in free agency and the Draft means Washington will be in less shootouts this year. Next we're relying on Kirk Cousins to have another career year. The league will catch up to Cousins a bit, so a regression is only natural.

The Legacy of Antonio Gates somehow doesn't seem to properly reflect his usage of PEDs and Gates is going to need a whole boat load of them in order to perform well this year. The 36-year-old has slowed down tremendously in the last couple years, but is still getting drafted in the top 10 at his position based on reputation. Last year his touchdown total and his yardage total was the second lowest since his rookie season. He only hit double-digits in points in two games last year. The addition of Travis Benjamin and the health of Keenan Allen should keep that targets elsewhere. You're better off chasing the upside in any of yesterday's sleeper tight ends than going back to the well with Gates.

Recovering from a ruptured patellar tendon is no sure thing. Just ask Victor Cruz, Cadillac Williams, and Austin Collie about the recovery from the injury. Graham had trouble fitting into Seattle's offense to start with and now he went be at his athletic best after the injury. Jimmy only put up three games of more than eight-plus points in the 11 games before the injury. The days of Graham helping your fantasy team seem to be over, which is a shame considering where he was to end the 2014 season.

If you're curious about guys you don't see listed here, you can always find me on Twitter (@MrT_BroBible) to ask questions, but remember to mention league specifics like PPR. You can always ask about general draft questions as well.