13 versions of the US flag you've probably never seen 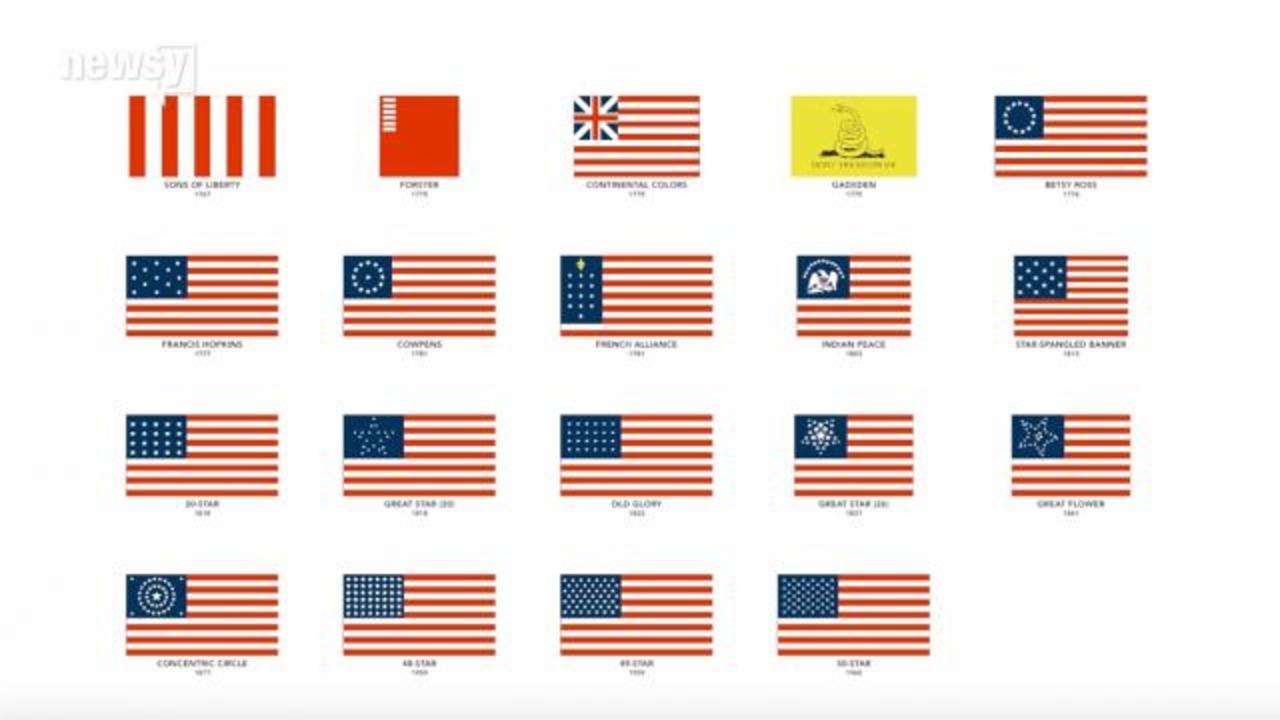 The American flag is one of the world's most recognizable symbols, but it didn't always look the way it does today.

Before we had the current American flag, there were many versions, featuring different combinations of stars and stripes, that flew throughout history.

The stars and stripes are a symbol of our country's history and some iconic moments that have stood the test of time. One of the most recognizable moments in American history was the raising of the U.S. flag at Iwo Jima during WWII. The moment was captured on camera by Associated Press photographer Joe Rosenthal in February 1945.

The flag is also a symbol of exploration. It was planted on the moon during the first landing by Apollo 11 astronauts in 1969.

The flag even has its own day -- each year Americans celebrate flag day on June 14.

Check out some variations of the U.S. flag throughout history

In 1767, the Sons of Liberty adopted a flag called the "Rebellious Stripes" with nine uneven vertical stripes (five red and four white).

The Continental Colors Flag, also known as the 'Grand Union Flag,' is considered to be the first national flag of the United States of America, previously that of the United Colonies of North America, until 1777.

According to the traditional account, the original flag was made in June 1776, when a small committee — including George Washington, Robert Morris and relative GeorgeRoss — visited Betsy and discussed the need for a new American flag.

Francis Hopkinson designed the first official American flag. He was an author, a composer, and one of the signers of the Declaration of Independence as a delegate from New Jersey.

This version of the US flag was said to have been carried by William Batchelor of the 3rd Maryland Regiment at the Battle of Cowpens, January 17, 1781, and this arrangement of stars has come to be known as the '3rd Maryland design.'

The Star-Spangled Banner, or the Great GarrisonFlag, was the garrison flag that flew over Fort McHenry in Baltimore Harbor during the naval portion of the Battle of Baltimore during the War of 1812.

The 'Betsy Ross' circle of 13 stars are in the inner ring to identify the original 13 colonies, and an outer circle of 24 stars identify the states that have joined the union since that time. This flag was one of many that were made to celebrate the upcoming First Centennial.

There are many, many versions of the Great Star flag. This flag flew over the Capitol dome for at least six months of 1818. The pattern was designed by Captain Samuel Chester Reid of the United States Navy.

On October 31, 1864, Nevada became the thirty-sixth State of the Union. The flag that symbolizes this step is the Wagon Wheel, with its 36 stars. T

Concentric circle flags have many versions which usually depict circles of stars around a larger image in the center.

Designed with 13 stripes alternating red , white and blue. This flag was raised by Captain John Paul Jones on the British frigate Serapis during the most famous Revolutionary naval battle.