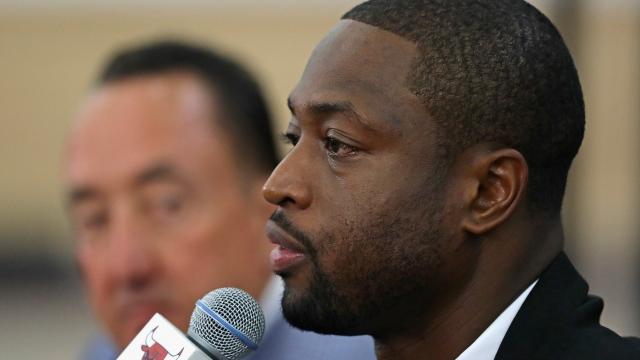 Aug 28 (Reuters) - Two brothers have been arrested and charged in the shooting death of basketball star Dwyane Wade's cousin in Chicago, a case that has emerged as a talking point in the U.S. presidential race, police said on Sunday.

Darwin Sorrells Jr., 26, and Derren Sorrells, 22, are facing charges of first-degree murder and attempted murder in the death of Nykea Aldridge, a 32-year-old mother of four, who was hit in crossfire on Friday while pushing a baby in a stroller.

Both brothers were on parole, said Chicago Police spokesman Anthony Guglielmi on Twitter on Sunday morning.

Guglielmi described Derren Sorrells as a "documented member" of a Chicago gang called the Gangster Disciples and the older Sorrells as a "co-conspirator" who was "let out early" on a sentence of six years after his conviction on a gun charge from 2013.

It was not clear whether the brothers had a lawyer.

In a city with as many as 90 shootings a week, homicides in Chicago this year are on track to reach their highest since 1997, raising concern about a reversal in the declining rate of serious crime in the country's largest cities in recent years.

Aldridge's death has drawn national attention because of the connection to Wade, a 12-time National Basketball Association All-Star who signed a two-year, $47.5 million deal this summer to play for his hometown team, the Chicago Bulls.

Wade described his cousin's killing as "another act of senseless gun violence" on Twitter.

In a campaign speech in Iowa on Saturday, Republican presidential candidate Donald Trump said Aldridge's shooting illustrated why black voters would rally behind him, calling it an example of violence that Democrats have failed to address.

Earlier Trump was criticized for politicizing the killing, and for spelling the NBA player's name wrong, when he sent a Twitter message that read:

"Dwayne Wade's cousin was just shot and killed walking her baby in Chicago. Just what I have been saying. African-Americans will VOTE TRUMP!"

Reactions to Trump's tweet following the fatal shooting of Dwayne Wade's cousin
For those who enjoy starting Saturday with tasteless, horrific self-involved tweets from the GOP nominee here... https://t.co/TAkvbOllq4
1) You’re celebrating/politicizing this death instead of mourning it or offering condolences. 2) His name is Dwyane. https://t.co/fFTDCDGjiL
You know how Republicans accuse Democrats of politicizing tragedy? Stop saying now, Republicans. #Sick #Tacky https://t.co/fSpoh68sij
There's nothing more horrifying than a presidential candidate patting himself on the back after someone is killed. https://t.co/TrrmEl0zpw
Vile comment devoid of empathy. Reminiscent of when he congratulated himself after the Orlando massacre. https://t.co/Xg6tzNZE8F
At least he came closer than Jeb Bush to spelling Wade's name correctly https://t.co/FUi3kp8hJ5
I often wonder if Trump has a clue what he's trying to convey. https://t.co/teJtEneEU1
Donald Trump just made his worst tweet yet https://t.co/ZXADAJl4Iq https://t.co/2bYjwZz1vo
Not from The Onion. Real tweet. https://t.co/Ii3kyx7sEy
Guess we know what the weekend news cycle will be about https://t.co/x5m3J8SOyB
Up Next

Hours later, Trump followed up with a Tweet that offered condolences to Wade's family.

More from AOL.com:
Murder cases soar in Chicago as detective force shrinks
'He killed 3 of my girls': Family of Chicago children killed in fire speak out
7-year-old girl shot during memorial for young shooting victim