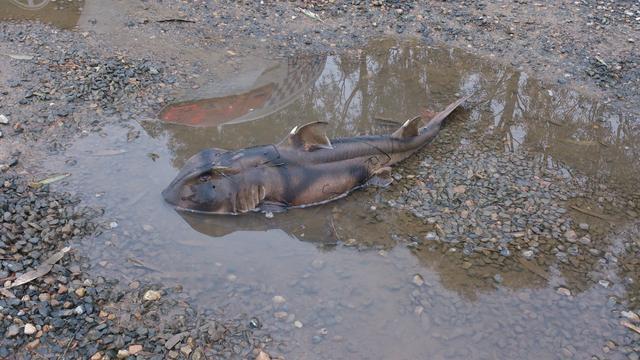 Typically, sharks are seen in the deep ocean waters and people don't expect to see them in streetside puddles.

But that's exactly what a local resident noticed just outside of Adelaide, Australia on Friday.

The South Australia Police noted in a statement, "Despite being only partially submerged in the puddle, the shark, believed to be a Port Jackson Shark, was still alive. A member of Fauna Rescue SA attended and placed the shark in a container of water. Sadly, Fauna Rescue SA advise the shark has since died."

It remains a mystery how the shark ended up on a road dozens of miles away from water but authorities cite a couple of possibilities, noting, "it is believed the shark may have been caught earlier today and dumped, or was kept as a pet but was growing too large for its tank."

Port Jackson sharks can grow to be over 5 feet and are found in the waters of Southern Australia.

More from AOL.com:
Drake congratulates Rihanna's MTV VMAs honor with giant billboard
3 ways to take better smartphone photos
The US Marines are dropping the hammer on ISIS in Libya