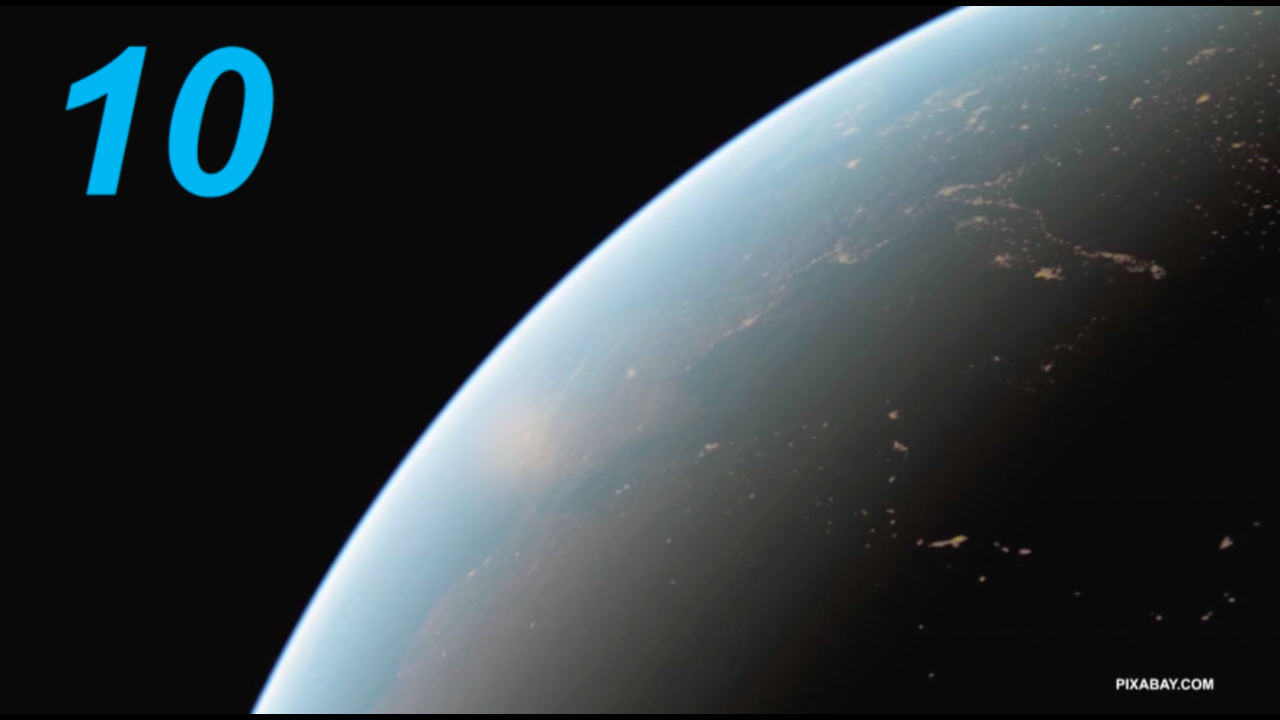 As technology advances and space becomes less of an unknown to the human race, our amazing planet Earth can sometimes seem to take a back seat to the other wonders of the universe. But, sometimes we all need a reminder of the spectacular sights our world has to offer.

It can be difficult to break down all of the actual wonders of our vast and diverse ecosystem, but it seems worth corralling some together, even if it means it's just a small glimpse of our planet.

Check out the gallery below for a look at some of these truly breathtaking sites.

See the full list below (no particular order):
24 PHOTOS
Greatest natural wonders of the world to remind you how wonderful Planet Earth truly is
See Gallery

North America, day and night, satellite image of the Earth

Aerial views of The Great Barrier Reef are seen from above in Cairns, Australia. A recent report by marine scientist Charlie Veron claims that the reef will be so degraded by warming seas that it will be gone within 20 years, and that this situation is now irreversible. He goes on to predict that once carbon dioxide levels hit levels predicted between 2030 and 2060, that all reefs will become extinct and their ecosystems would collapse.

The Grand Canyon, considered one of the seven natural wonders of the world, is 277 miles (446 km) long, up to 18 miles (29 km) wide and attains a depth of over a mile (1.8km). Nearly two billion years of the Earth's geological history has been exposed as the Colorado River and its tributaries cut their channels through layer after layer of rock while the Colorado Plateau was uplifted. While the specific geologic processes and timing that formed the Grand Canyon are the subject of debate by geologists, recent evidence suggests the Colorado River established its course through the canyon at least 17 million years ago. Since that time, the Colorado River continued to erode and form the canyon to its present-day configuration.

Aerial view taken of Angel Falls, the world's highest waterfall, with a height of 979 meters (3,212 feet), located in Canaima National Park, South-Eastern Venezuela. The falls are 500 feet wide at the base. They got their name from American pilot James Angel, who saw the waterfall for the first time in 1933 while searching for the Gold City.

View of the 'Grand Prismatic' hot spring with it's unique colors caused by brown, orange and yellow algae-like bacteria called Thermophiles, that thrive in the cooling water turning the vivid aqua-blue to a murkier greenish brown, in the Yellowstone National Park, Wyoming. Yellowstone National Park was established by the U.S. Congress and signed into law by President Grant on March 1, 1872. The park is located primarily in the U.S. state of Wyoming, though it also extends into Montana and Idaho and was the first national park in the world. It is known for its wildlife and its many geothermal features, especially the Old Faithful Geyser.

This picture shows an aerial view of Mount Everest, the world's tallest mountain which is 8,848 meters (29,028 feet) high. In 1994, a research team discovered that the mountain is continuing to grow by about 0.16 inches every year. In 1978, Reinhold Messenger and Peter Habler were the first to ever climb the mountain without oxygen.

Aerial view of the Amazon Rainforest, Acre State, Brazil.The Amazon is home to more than 2 and a half million different species, and is the largest rainforest in the world. It's estimated that 10% of total animal species lives in the vastly diverse Amazon Rainforest. The Amazon basin is so large that it covers 40% of the South American continent.

FOZ DO IGUACU, BRAZIL: General view of Iguazu Falls in Foz do Iguacu, Brazil. The area of Iguazu Falls is a set of about 275 waterfalls in the Iguazu River (catchment area of the river Parana), located between the Iguazu National Park, Parana (Brazil) and the Iguazu National Park in Misiones (Argentina) the border between the two countries. The total area of both national parks, correspond to 250,000 hectares of subtropical rainforest and is considered Natural World Heritage.

The Wave is a sandstone rock formation. It is located near the Arizona-Utah border, on the slopes of the Coyote Buttes, in the Paria Canyon-Vermilion Cliffs Wilderness, on the Colorado Plateau. It is famous among hikers and photographers for its colorful, undulating forms, and the rugged, trackless hike required to reach it.

View of the south wall of the Perito Moreno glacier in the Park and National Reservation Los Glaciares, an ecotourism destination in Patagonia, Argentina, declared by the UNESCO as Natural World Heritage Site. The glacier Perito Moreno, in the province of Santa Cruz, is one of the most significant natural attractions of Argentina 30km (20 miles) long and with a total surface of 257 km2 (160 square miles). The magnitude of this mass of ice, seems to float on lake Argentino some 70 meters (230 feet) above the water surface.

Tanzania, The world famous Ngorongoro Crater. Its 102-square-mile crater floor is the haunt of a wonderful wildlife spectacle. The crater is in fact a caldera -- the largest unbroken, unflooded caldera in the world -- which was formed two and a half million years ago.

View of the Fly Geyser in Nevada. This odd-looking geyser lies on the edge of Black Rock Desert and was accidentally made by mankind. While drilling for a well, geothermal boiling water, which can hit 200 degrees Fahrenheit, was struck. Because this waster wasn't suited for farming, it was left alone. A second geyser was created when an energy company was drilling and struck the same geothermal heated water.

Now, Fly Geyser exists 40 years later and has grown substantially. However, the geyser is not open to the public, seeing as it sits on private property.

Aerial view of the Great Blue Hole, Belize, Central America. This natural wonder is located off the coast of Belize, and is widely known as a diver's paradise. The hole originated as a limestone cave that began to form some 150,000 years ago. The deepest point of the Blue Hole is at 406 feet, and it is shaped as almost a perfect circle.

Pamukkale, Turkey. Meaning 'Cotton Palace' in English, Pamukkale is a famous site in Turkey for its natural spring and water formations. Calcite waters have created a unique landscape made of mineral forests and petrified waterfalls.

Autumn colors of Natural reserved area in Jiuzhaigou, Sichuan, China. The area is known in English as the "Nine Valley Village" and is a national park in South Western China. The landscape is vast -- from mountains to waterfalls and forests. The park covers 72,000 ha, or 277 sq. miles.

The Blue Grotto is located on the coast of the island of Capri, in Southern Italy. It's is one of several sea caves, worldwide, that is flooded with a brilliant blue or emerald light. The quality and nature of the color in each cave is determined by the particular lighting conditions in that specific cave.

This photo shows the 'Top of Peak' formation at the Huangshan (Yellow Mountains) park in Anhui Province. The UNESCO World Heritage Site is one of China's major tourist destinations and has been a source of inspiration to Chinese painters, writers and poets for thousands of years.

Aerial view of Victoria Falls on the Zambezi River (UNESCO World Heritage List, 1989), Zimbabwe. These falls are among the most spectacular in the world, and expand over 14 sq. miles. Sprays from the majestic Victoria Falls can be seen from 18 miles away.

In the Catedral de Marmol (the Marble Cathedral), erosion has created caverns in the marble on the northern shore of Lago General Carrera, Patagonia, Chile. Visitors can see blue water reflecting off the marble surfaces of the caves, creating a mesmerizing effect. The caves themselves have been formed by water that flowed through them for thousands of years.

MADAGASCAR-ENVIRONMENT-BAOBAB By Gregoire Pourtier: Ancient Baobab trees are silhouetted at dusk against the Madagascan susnset near Morondava. The trees can range anywhere from 15 to 98 feet tall, and can be as wide as 150 or so feet.The Malagasy government recently declared the the 320 hectare-baobab area a protected zone in a bid to conserve the natural resource. The striking landscape is a major tourist attraction for the region.

Aurora borealis (Northern Lights) photographed in the early hours of the morning in arctic circle. The colors themselves are actually produced by "collisions of electronically charged particles from the sun hitting the Earth's atmosphere."

The phenomenon can be seen as far south as New Orleans, but the best places to watch in North America are in Canada and Alaska.

The Danakil Depression is located in the Danakil Desert in Ethiopia, and is known as one of the 'cruelest places on Earth.' Record temperatures have been recorded here, breaking 120 degrees Fahrenheit. The depression lies 150 ft below sea level and is characterized by active volcanoes, a living lava lake, geysers, acid ponds, and mounds of sulfur deposits.

Picture taken shows a tourist visiting the Salar de Uyuni, the world's largest salt flat, located in Bolivia near the crest of the Andes, some 3,650 metres above sea level.

Watch below to see some of America's most unique natural wonders: