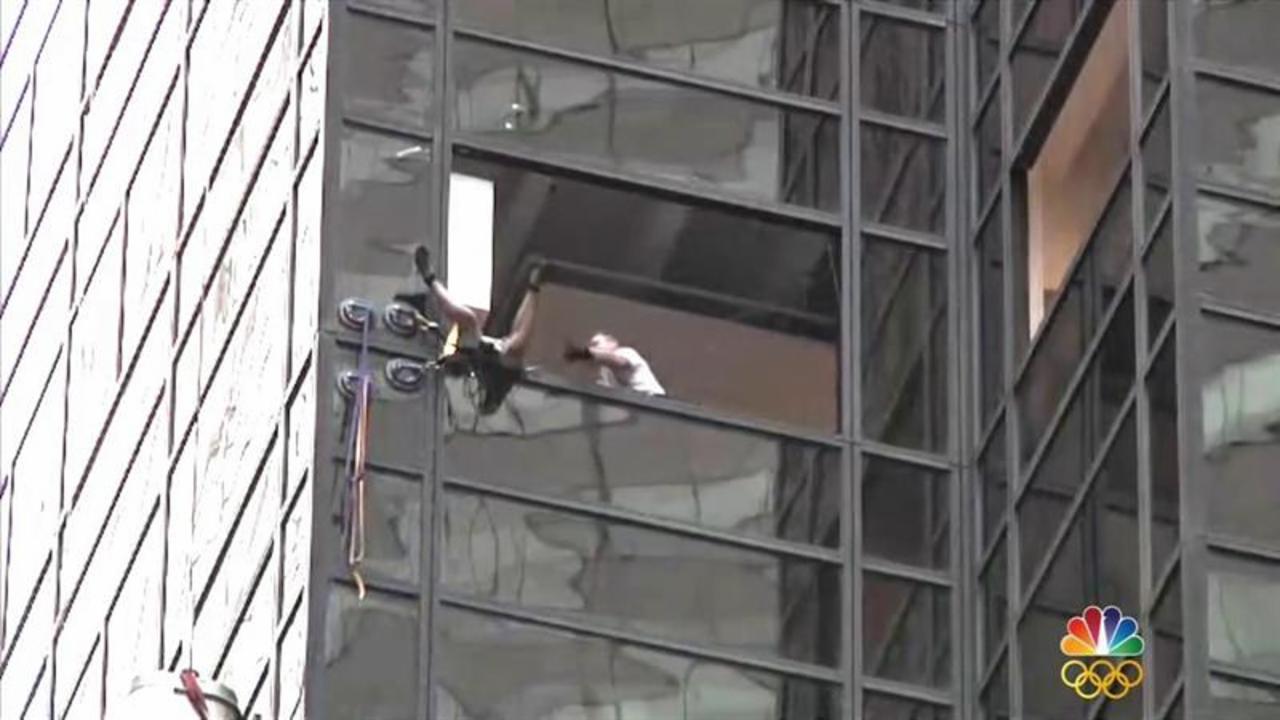 A man captured after attempting to scale Trump Tower in midtown Manhattan Wednesday apparently made the climb to deliver a message to Donald Trump himself.

In a YouTube video posted Tuesday, a man who resembles the climber said he wanted to "seek an audience with Mr. Trump" about "an important matter."

The climber, who goes by the first name Steve and is from Virginia according to a police source, was grabbed and hauled into the skyscraper by law enforcement at the twentieth story about two hours after the spectacle began. Police said he is 20 years old.

In the video, which has not been independently confirmed by NBC News, the man said he needed to get Trump's attention via scaling the building because he would be unable to reach him via "conventional means." He also encouraged others to vote for the Republican presidential candidate in the November election. Police said the man came to New York Tuesday and was staying in a local hotel.

Photos of the Trump Tower climber:

"He was climbing for a while and I could see that he was getting tired," Emergency Service Unit Det. Christopher Williams, the officer who grabbed the climber and pulled him inside, said after the incident was over.

"And I said, 'If you lock this in, at least if you get tired we will have you, and you won't fall.' And he refused to take the line — his thing was he wanted to go talk to Trump," Williams said.

The man's sole purpose was to meet Trump, and after he was taken into custody he asked to meet the GOP nominee, NYPD Chief of Detectives William Aubrey said. The climber was taken for a psychological evaluation.

Emergency services on the scene removed windows and vents in order to create openings to the climber, who used five suction cups during his attempt. They also set up inflatable "airbags" in case he fell. The man changed his path multiple times in order to avoid officers leaning out of the tower.

When police saw they had an opportunity to grab the climber, they acted.

"I did talk to my crew and let them know, listen, he's at a level where I am able to grab him safely and bring him in," Williams said. "When it presented itself, I reached out, took hold of his hand, and I said, 'Sir, you need to come with me." The man did not resist, Williams said.

Located on 56th Street on the East Side of Manhattan, Trump Tower is the Republican presidential nominee's campaign headquarters as well as his personal residence.

Great job today by the NYPD in protecting the people and saving the climber.

Trump was spent Wednesday at rallies in Virginia and Florida Wednesday, and was not in New York at the time of the stunt.