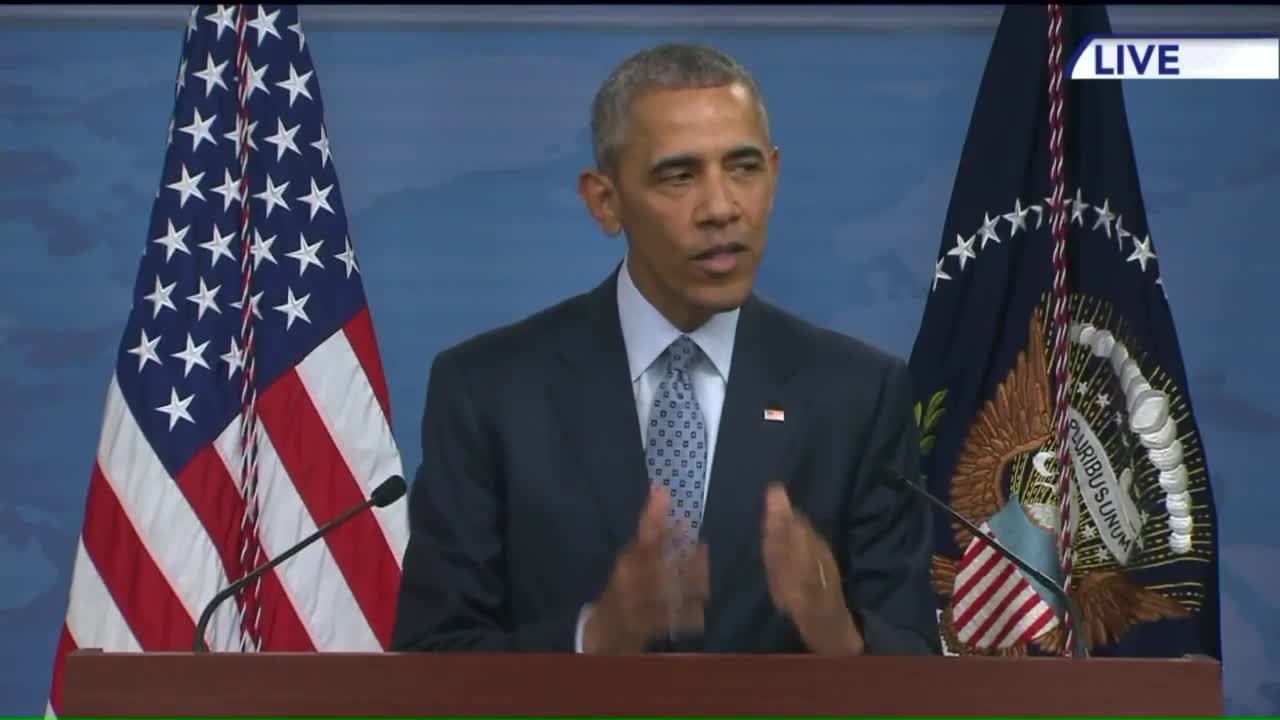 President Barack Obama went on an extended rant Thursday about a story that detailed the transfer of $400 million in cash to Iran the same day four American hostages were freed from the country.

"What we have is the manufacturing of outrage in a story that we disclosed in January," Obama said at a Pentagon news conference. "And the only bit of news that is relevant on this is the fact that we paid cash."

The Wall Street Journal described the transfer in a story earlier this week. The cash — euros, Swiss francs, and other currencies — was airlifted to Tehran on a cargo plane amid a prisoner swap in January in which seven Iranians detained in the US were exchanged for Washington Post reporter Jason Rezaian and three other Iranian-American prisoners.

The payment was part of a decades-old dispute over money Iran sent to the US to buy weapons that they never received.

See images of the hostages:

Iran prisoner release deal
Up Next

Obama said the US had previously disclosed the $400 million payment to Iran and argued the reason the payment was made in cash was because of existing sanctions in place against Iran.

"The reason that we had to give them cash is precisely because we are so strict in maintaining sanctions and we do not have a banking relationship with Iran, that we couldn't send them a check and we could not wire the money," he said. "And it is not at all clear to me why it is that cash, as opposed to a check or a wire transfer, has made this into a new story. Maybe because it kind of feels like a spy novel ... because cash was exchanged."

The cash transfer came after the Obama administration struck a deal with Iran to limit its capacity to develop nuclear weapons in exchange for sanctions relief for the country. Some have said the hostages detained in Iran, whom were being held illegally, were used as bargaining chips as nuclear negotiations were underway.

"It's now been well over a year since the agreement with Iran to stop its nuclear program was signed," Obama said. "And by all accounts, it has worked exactly the way we said it was going to work."

He then railed against those who criticized the deal and thought it wasn't going to work:

"You will recall that there were all these horror stories about how Iran was gonna cheat and this wasn't gonna work and Iran was gonna get $150 billion to finance terrorism and all these kinds of scenarios, and none of them have come to pass. And it's not just the assessment of our intelligence community, it's the assessment of the Israeli military and intelligence community, the country that was most opposed to this deal that acknowledges this has been a game changer and that Iran has abided by the deal and that they no longer have the sort of short-term breakout capacity that would allow them to develop nuclear weapons."

"Why not have some of these folks that were predicting disaster say, 'You know what, this thing actually worked'? That would be a shock. That would be impressive. If some of these folks who had said the sky is falling suddenly said 'you know what, we were wrong and we're glad that Iran no longer has the capacity to break out in short term and develop a nuclear weapon.' But of course that wasn't going to happen."

Washington Post columnist Josh Rogin noted on Twitter after Obama's comments that the main criticism of the Iran nuclear deal is that "when the deal expires, we're screwed." If Iran follows the terms of the deal, they will not be able to build a nuclear weapon for 10 years — but after that, the country could boost its centrifuges and ramp up its nuclear program.