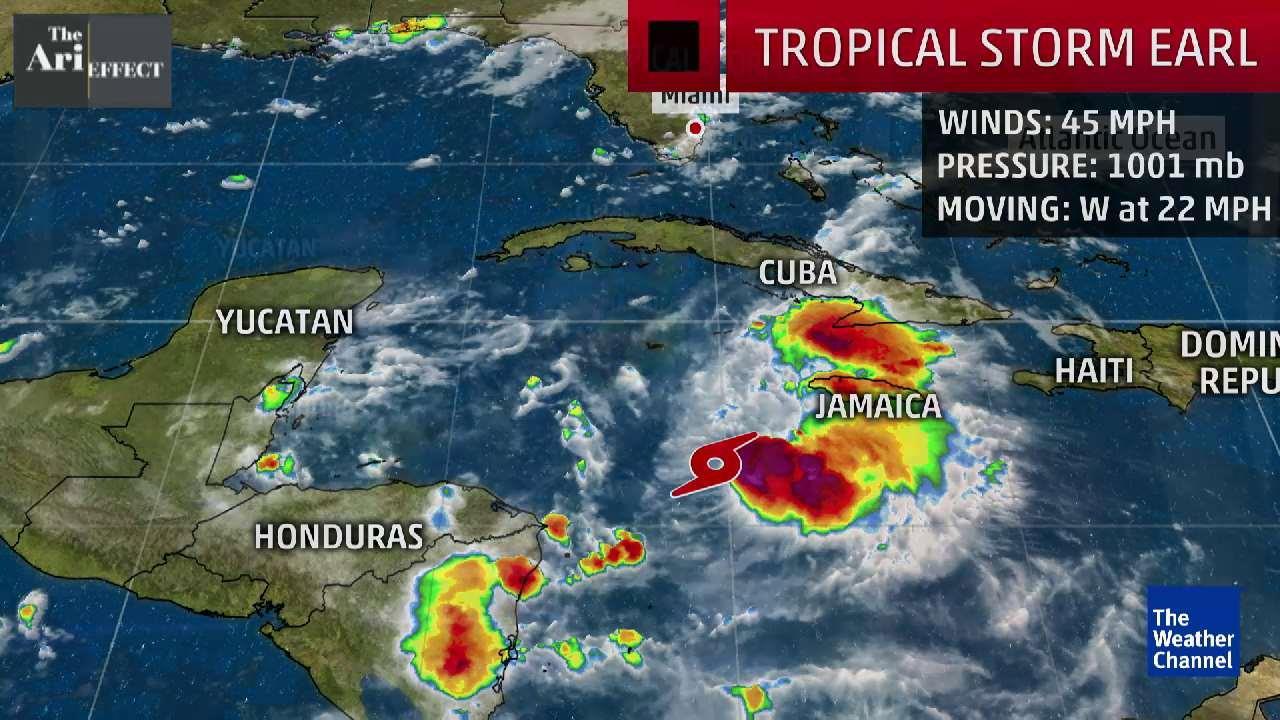 Tropical Storm Earl continues to gain strength slowly, and may landfall in Belize as a hurricane early Thursday.

Hurricane warnings have just been issued for the Bay Islands off the north coast of Honduras and continue for the Belize coast northward to Puerto Costa, Mexico. This includes Belize City and Chetumal, Mexico.

Tropical storm warnings extend northward to Punta Allen, Mexico, but do not include either Cancun or Cozumel. 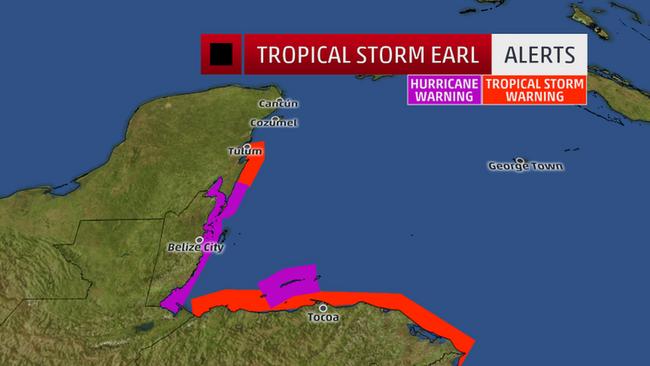 Tuesday night, the center of Earl reformed a bit farther south than the previous center, and the NHC noted a partial mid-level eye was suggested in microwave imagery.

The center of Earl was located about 250 miles east-southeast of Belize City, Belize, Wednesday morning. Earl's forward speed had slowed over the past 24-48 hours, moving west at 14 mph.

Some bands of rain were already wrapping into parts of Honduras, and clusters of heavy rain well ahead of Earl were already soaking parts of central America, including Belize and Guatemala.

More from The Weather Channel: 5 Things to Know About Earl 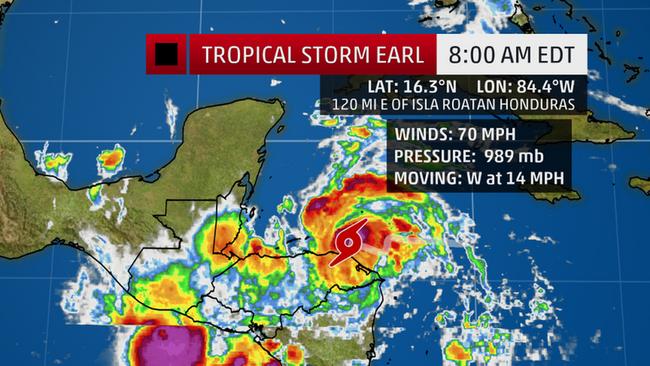 First up, the center of Earl is likely to hit the Bay Islands of Honduras Wednesday.

Thanks to strong high pressure aloft over the southern United States, Earl will be steered toward the coast of Belize or Mexico's Yucatan Peninsula early Thursday.

With wind shear not too strong, a moist atmosphere, and the typically warm sea-surface temperatures of the western Caribbean Sea, Earl is expected to continue gaining some strength before landfall either as a strong tropical storm or low-end hurricane. 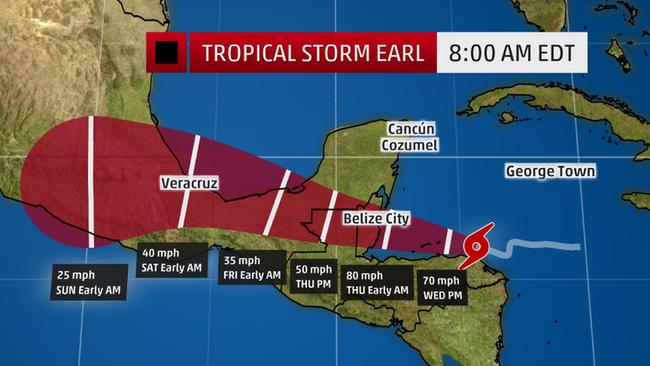 This would be the first hurricane landfall on the Caribbean side of central America since Category 1 Hurricane Ernesto almost exactly four years ago.

More from The Weather Channel: Why Western Caribbean Sea Has Been Hurricane-Free Since 2013

Beyond that, it remains uncertain whether Earl's center will re-emerge over the Bay of Campeche Friday into early Saturday. If it does, there's a chance for some minimal re-intensification before the center slides back over land this weekend in eastern Mexico.

Otherwise, the remnant will simply slide over land, raining itself out over southern Mexico this weekend.

RELATED: 15 of the deadliest American hurricanes ever

15 PHOTOS
15 of the deadliest American hurricanes ever
See Gallery

15 of the deadliest American hurricanes ever

Hurricane Hugo made landfall as a Category 4 storm in South Carolina. It caused 21 deaths in the US and resulted in $7.1 billion of damage. At the time, it was the costliest storm in US history.

While not an official hurricane, Allison clocks in as the costliest and deadliest tropical storm in US history, causing 41 deaths and costing more than $5 billion in damage. The storm started over the Gulf of Mexico near Texas, then traveled east, causing floods like the one pictured here in Houston, Texas.

Hurricane Irene, the first storm to hit the US since Ike three years earlier, made landfall in North Carolina as a Category 1 storm. The storm eventually made its way up to New York City, bringing flooding -- like the kind pictured here in Puerto Rico -- and causing $7.3 billion in damage overall.

Hurricane Floyd was a catastrophic storm because of the rain it brought along. The rain caused extreme flooding from North Carolina on up as the Category 2 storm traveled up the East Coast.

The Great Atlantic Hurricane of 1944 was also devastating to New England, with 64 deaths and more than $100 million in damage. The storm was a Category 3 as it sped up the coast, hitting the Carolinas, Rhode Island, and Long Island before downgrading to a Category 2 in Maine.

Hurricane Agnes, as seen in this image made it all the way inland to Pennsylvania. Although it was only a Category 1 storm (with winds from 74-95 mph), it still caused 122 deaths and caused $2.1 billion in damage.

The third costliest storm in US history, with $29.5 billion in damage, occurred in September 2008. Starting off the west coast of Africa, Hurricane Ike made its way over the Caribbean and into the Gulf, making US landfall in Texas as a Category 2 storm.

Hurricane Camille formed in the Gulf of Mexico and hit Mississippi as a Category 5 storm. Camille caused more than 256 deaths and clocks in as the second most intense hurricane to hit the US.

Nicknamed "Long Island Express," the storm hit Puerto Rico as a Category 5 storm before charging north and hitting Long Island, New York and Connecticut as a Category 3 hurricane. The storm was responsible for more than 256 deaths.

With $71.4 billion in damage, Hurricane Sandy was the second costliest hurricane in US history. The Category 1 storm pummeled New York City, flooding the city's transportation systems and leaving thousands of homes destroyed.

It's looking more and more like Hurricane Joaquin won't make landfall in the US and join the list of most horrific storms in US history.

The U.S. started naming storms with women's names starting in 1953. Hurricane Audrey, the first storm of the 1957 hurricane season was the deadliest of the 1950s. It originated in the Gulf of Mexico, making landfall in Texas as a Category 4 storm. This image of the storm shows just how far hurricane imaging has come.

This Category 4 storm swept into the Gulf of Mexico right under Key West, Florida(pictured), landing as a Category 3 storm in Corpus Christi, Texas. Anywhere from 600 to 900 people died in that storm.

Hurricane Katrina is arguably the most notorious storm of the 21st century. The storm made landfall as a Category 5 near Miami before striking Louisiana as a Category 3 storm. Katrina was the third deadliest, and costliest hurricane in U.S. history with more than 1,200 deaths and $108 billion in damage.

This hurricane was the second deadliest in US history, with more than 2,500 deaths. The Category 4 storm made landfall in Palm Beach on September 10, 1928. Puerto Rico got hit hard as well, with winds at 144 mph.

The deadliest hurricane in US history happened at the turn of the 20th century. The Category 4 of 5 hurricane -- with winds anywhere from 130-156 mph -- made landfall in Galveston, Texas (pictured), then headed north through the Great Plains. Anywhere from 8,000 to 12,000 people died in the storm.

Rainfall totals of 8-12 inches (locally higher) are possible along the path of Earl in parts of Belize, Honduras, Guatemala, and southern Mexico, including the Yucatan Peninsula. Dangerous flash flooding and mudslides are possible through the weekend in these areas. 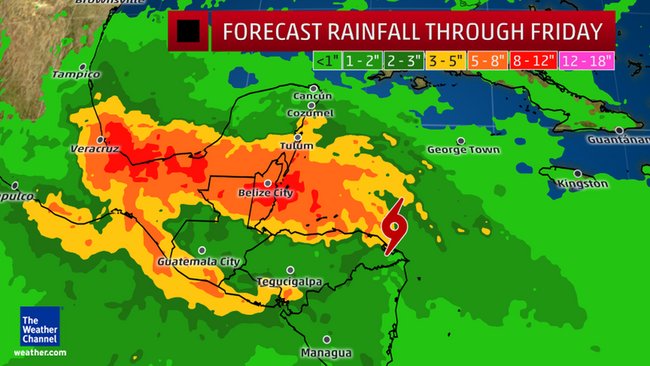 Storm surge may raise water levels up to 3-5 feet above normal tide levels, the National Hurricane Center said. This could cause some coastal flooding along the immediate coastline of the Honduran Bay Islands, Belize, adjacent parts of Mexico's Yucatan Peninsula. Battering waves riding atop the surge may also lead to additional damage and flooding.

Hurricane-force winds may arrive first in the Bay Islands of Honduras later today, then spread to the Belize coast and possibly Mexico's southern Yucatan Peninsula in the hurricane warning area overnight tonight into early Thursday.

Tropical storm-force winds are expected on the rest of the northern Honduran coast today into early Thursday.

The track of Earl will remain well south of the U.S.

However, some increase in showers may spread to parts of South Texas this weekend.

Of perhaps more concern is the threat for higher surf and rip currents by the weekend up the Texas coast, possibly as far north as Galveston.

Earl was named late Tuesday morning after a Hurricane Hunter reconnaissance mission found that an area of low pressure had formed.

This system has already been impactful the last few days prior to being named Earl. Six people were killed in the Dominican Republic Sunday into Monday as this system passed near the island.

More from The Weather Channel: 6 Killed in Dominican Republic