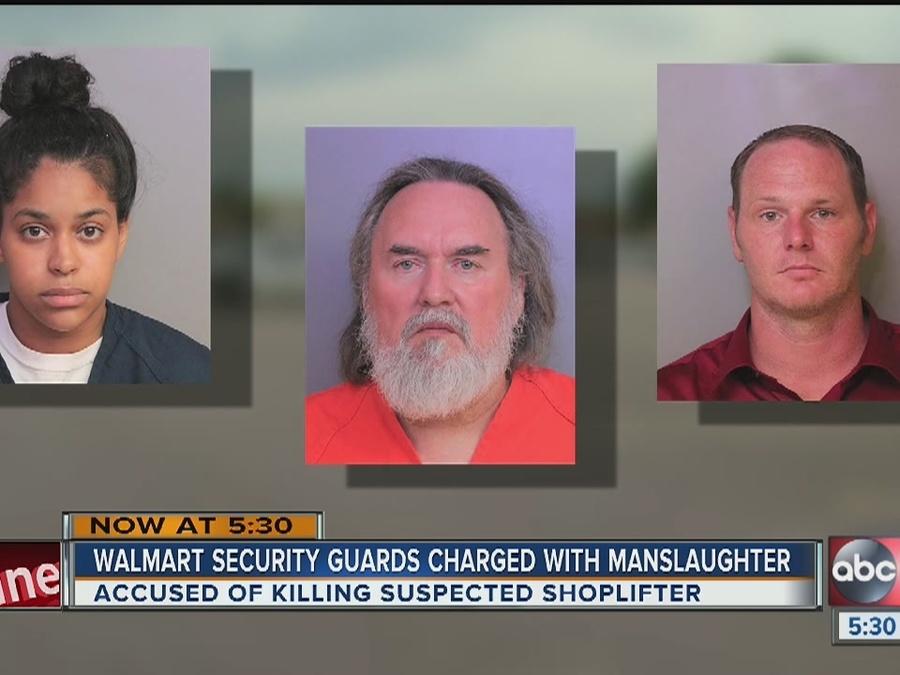 Three employees at a Florida Walmart have been charged in the death of an attempted shoplifter who tried to make off with $380 in DVDs.

Officers were called to the Walmart at 3:05 a.m. on Feb. 7 after Kenneth Wisham loaded a shopping cart full of discs and tried to leave the store, according to the Lakeland Police Department. When employees confronted him, Wisham fled.

The 64-year-old, hampered by the need to keep pulling up his pants because they were falling down, didn't get far, police said. Affidavits say he fell and then was aggressively pinned down by the three employees: Nathan Higgins, 35, Crucelis Nunez, 23, and Randall Toko, 58.

According to the arrest reports, a witness saw a female employee jump on Wisham's back, knocking him to the ground before punching him multiple times as Wisham held his hands over his head. Then another employee kneed him in the back, the witness said. The third held Wisham by his ankles, a store manager who also witnessed the incident told police.

"The victim struggled for several minutes, and then ceased struggling," said the affidavit for Higgins. Higgins told police he heard Wisham yelling "Let me go, let me go!" and then he released his hands from his ankles, the document said.

Nunez told police Wisham also shouted, "I can't breathe," according to her affidavit.

With officers already en route, the employees began CPR and called for an ambulance, police said. The first officer to arrive "began life saving measures to include using an Automated External Defibrillator and taking over CPR until EMS arrived," the Lakeland Police Department said, and then Wisham was transported to the hospital in critical condition.

A little over 12 hours later, he died.

Higgins, a Walmart support manager, Nunez, a customer service manager, and Toko, who works in the store's loss prevention unit, were arrested last week based on a medical examiner's findings, which determined the cause of death was mechanical asphyxia — strangling or choking by hand. The autopsy also revealed Wisham had 15 broken ribs.

Each employee faces one manslaughter charge. They were arrested on Thursday and appeared before a judge Friday. According to James "Rusty" Franklin, the attorney for Higgins, all three have bonded out of jail.

Higgins filed a written plea of not guilty, Franklin told NBC News. The other defendants' attorneys could not be reached.

Charles Crowson, Walmart senior manager of corporate communications, told NBC News the employees have been suspended and said in a statement that the company was reviewing the incident.

"Our hearts go out to everyone affected by these events. The status of the associates involved continues to be reviewed. We'll continue working with law enforcement officials, as we have from the beginning, while conducting our own review."

Wisham was a resident of Lakeland, a city about 35 miles east of Tampa.

RELATED: 9 ways to save money at Wal-Mart:

9 secret ways to save money at Walmart

Even if Walmart isn’t offering the lowest price on a given item, you can take advantage of the store’s price match policy to secure a better deal. Walmart will match any advertised price from stores in your area, said Paul Ivanovsky, creator of IHeartTheMart.com, a blog dedicated to saving money at Walmart. To qualify, the items in question must be identical and in stock at the other retailer. According to Ivanovsky, the price matching policy is a great way to save money on items such as fruit, meat and paper products.

Additionally, Walmart will match many online competitors’ prices for home goods and other non-food items. While restrictions exist, the retail giant will generally match prices for goods from Amazon.com, BestBuy.com, Target.com and TigerDirect.com, among other stores.

2. Get Online Prices in the Store

Before you make a purchase in one of its stores, see if Walmart is offering a better price online, as the company will match Walmart.com prices for in-store purchases. Bethany Halford, co-creator of the Whoa, Wait. Walmart? blog that features great finds at Walmart, said she frequently finds items that have been marked down online but not in the stores.

To get the better price, she pulls the item up on her phone and shows it to the cashier when she checks out. Recently, Halford saved a couple dollars when she found a pair of slippers selling for $12.88 in the store and about $10 online.

3. Use the Savings Catcher App

If you forgot to check other stores’ prices before shopping at Walmart, you still can take advantage of the retailer’s price match policy after the fact by using the Savings Catcher app. After scanning your receipt with the app, you can compare the prices you paid with local competitors’ advertised rates, Ivanovsky said. If an item you bought is cheaper elsewhere, you will be credited the difference in the form of Savings Catcher Rewards Dollars, which can be redeemed for a Walmart gift card or Walmart Buck$ to be added to a Bluebird by American Express Card prepaid debit card.

“Even if you don’t think you bought something that can be matched, you might be surprised at what the Savings Catcher finds for you,” said Dian Farmer of GroceryShopForFree.com.

4. Get Free Shipping From Walmart.com

Shipping costs can quickly negate the savings you might accumulate by shopping online. However, there are two ways you can get free shipping from Walmart.com. If you spend $50 or more online, Walmart will ship your purchases for free, Halford said. While there’s a flat $4.97 shipping fee for orders less than $50, shoppers can get around that fee by having online purchases shipped to their local stores, said Amanda Jerkins, the other co-creator of Whoa, Wait. Walmart?

It’s important to note that perishable products, hazardous materials and items weighing more than 350 pounds aren’t eligible for free store pickup. With many other items, though, you can pick them up the same day you order them online.

5. Comb Through the Clearance Racks

If you rush through your Walmart trips, you might miss out on some of the retailer’s best clearance deals. Typically, deeply discounted items are placed in an aisle near the toy or lawn and garden department, Halford said. When she and Jerkins comb through the clearance racks, they often find that items they were coveting at full price are now on sale for much less.

For example, Jerkins said she recently found a floor lamp she wanted that was marked down from $45 to $20 in the clearance section. She also recommends checking the end caps on aisles throughout the store for heavily discounted items.

6. Shop Early in the Morning for Grocery Deals

If your local Walmart has a grocery department, you can save money by timing your food shopping trips right. Farmer recommends shopping early in the morning to score discounts on one of the priciest food items on your list — meat.

“Normally, by 8 a.m., the meat department has discounted their meat, and you can grab some great deals,” she said.

Walmart is known for offering great Black Friday sales. In fact, DealNews.com found that it was among the top five retailers with the best deals on Black Friday and the entire week of Thanksgiving. However, there are other times of the year when retailers offers savings, as well.

In particular, July has become a season for merchants to promote Black Friday-like deals, said Slickdeals.net consumer expert Regina Conway. In July of 2015, Walmart hosted a big sale to rival Amazon’s one-day sale for its Prime members, who pay a $99 annual fee for free two-day shipping and other benefits. Amazon has already announced plans to hold the event again, and Conway anticipates that Walmart will do the same. As an added bonus, Walmart doesn’t require any sort of membership fee to take advantage of its deals.

Some of the items you can find at a dollar store can also be purchased at Walmart for $1 or less — and you don’t even have to ask for price matching. For example, Walmart sells personal grooming products such as deodorant and shampoo for about $1. You also can find greeting cards and gift bags for $1, although the selection is smaller than what you’d see at a traditional dollar store.

Walmart has rolled out a new service in some cities that doesn’t cost a dime to use and can save shoppers a lot of valuable time: grocery pickup. Customers in Atlanta, Nashville, Colorado Springs, Tucson, Charlotte, Fayetteville, Salt Lake City and Ogden can now order their groceries online and then pick them up at select stores in their areas. You can even select a time for your pickup, and an associate will load the groceries into your car.

Follow the above tips on your next Walmart trip, and you will likely be smiling as brightly as the retailer’s trademark logo.

Related: 6 Grocery Delivery Services That Are Worth the Money