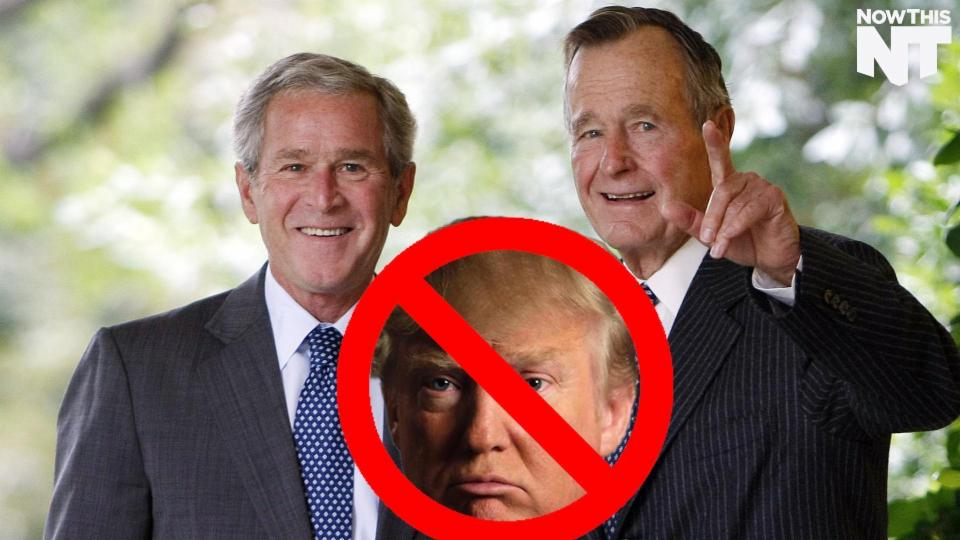 Former President George W. Bush has refused to endorse Republican nominee Donald Trump, and also has refrained from criticizing him.

But while he still has not done so by name, the former president rebutted many of Trump's foreign policy stances at a fundraiser in Cincinnati for Sen. Rob Portman, R-Ohio, according to a report in The Wall Street Journal.

Bush, without directly framing his comments in the context of the 2016 presidential race, denounced the "isolationism, nativism and protectionism" that have been part of Trump's campaign message, the Journal said, citing four of the fundraiser's attendees.

See George W. Bush and Jeb Bush through the years:

"It was an interesting exercise of statecraft," former Ohio Secretary of State Ken Blackwell told the Journal. "No one could say he directly spoke in attack mode against Donald Trump. Neither could anybody miss the fact that he thought there were some cutting-edge issues that Trump is advancing that need to be scrutinized and debated."

For example, attendees reported that Bush said Muslim women should travel to the U.S. so they can encourage their home countries to emulate America's free society and bring equality to the Middle East. Trump, meanwhile, has floated the idea of restricting Muslims from entering the U.S.

Bush "said everyone wants to be free," U.S. Rep. Brad Wenstrup of Cincinnati told the Journal. "He really touched everyone in the room."

Bush, along with his father, former President George H.W. Bush, were among the first high-profile Republicans to say they would skip the party's convention, which took place in Cleveland last month.

Although they did not openly oppose Trump's nomination, the Bushes have declined to endorse Trump or any candidate in the 2016 race – a remarkable snub in that the Republican Party's most recent presidents are refusing to back their potential successor.

Portman, meanwhile, has labored to walk the line between supporting his party's nominee, having endorsed Trump but avoided campaigning with him thus far. Locked in a tight re-election battle with former Ohio Gov. Ted Strickland, Portman has taken pains to draw sharp differences with the GOP nominee, but has nonetheless come under fire for continuing to support him.

"If there is a shred of sincerity behind Portman's statement, he would show the same kind of courage that Republican Gov. [John] Kasich has and retract his endorsement of Trump today," a Strickland spokesman said in a statement Monday, after Portman distanced himself from Trump's critiques of Khizr and Ghazala Khan, the Muslim-American parents of a soldier killed in Iraq.

Portman, who served as U.S. trade representative and director of the Office of Management and Budget in Bush's administration, is considered one of the most vulnerable incumbents up for re-election in the Senate this fall.

More from US News:
The Disaster of Hillary Clinton and Donald Trump
Classified Briefings for Trump, Clinton Are Not a Big Deal
Trump Gets Hard Time From Pornographers Over Anti-Obscenity Pledge