Best and worst things to buy in August 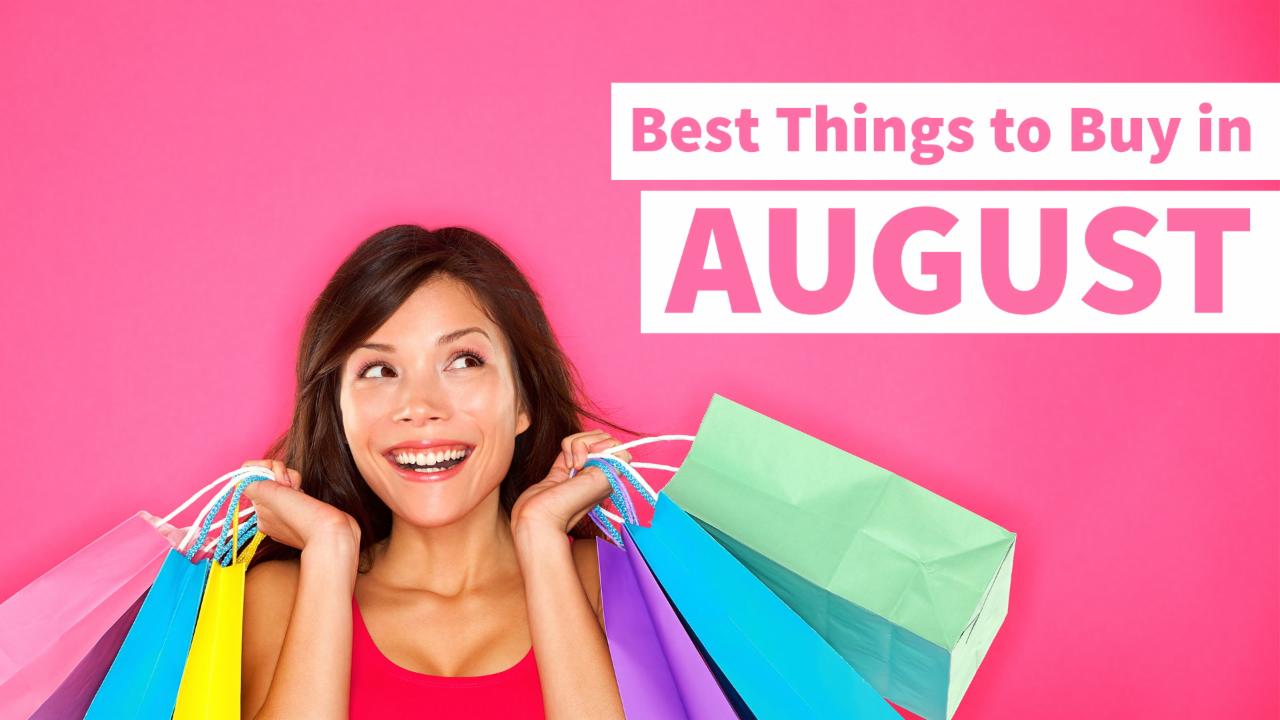 It's already August. That means it's about time for the kids to go back to school, for fall clothes to start popping up in stores and for the 2016 Rio Olympics to begin.

If your budget is hurting from summer festivities and you're stressing about upcoming expenses, know that the right planning can get your finances back on track. If you plan your shopping accordingly, you can save money on the things you need on a regular basis.

Best Things to Buy in August

The season might be over soon, but the end of summer just so happens to be when you'll find the best discounts on all things summer. Whether you need a new t-shirt or pair of shorts, now is the time to snag it at a steep discount — even if you have to wait until next year to wear it. Here are the best deals to be found in August.

School supply sales are abundant in August, so kindergartners and college students alike can get everything they need to go back to school in the fall. Expect to find the best deals on everything from school supplies to kids clothing this month. Many states even eliminate sales tax in August for some of the best deals of the year.

Additionally, the longer you can hold off buying things like pencils and folders the better, since prices will only go down in the coming weeks as retailers attempt to get rid of extra inventory by putting items on clearance. So, get what your child absolutely needs now and wait on the rest for even bigger deals at the end of the month.

"Warm weather clothing — like shorts and t-shirts — will see some of its lowest prices of the year, and these items will still be seasonally appropriate for a few more weeks," said Benjamin Glaser, features editor with DealNews. "Even heavier clothes like jeans will see discounts during back-to-school sales."

Keep in mind, however, that while the sales are big, the selection usually isn't the widest since shoppers have picked over most of the merchandise through June and July.

Little kids aren't the only ones who get a break on back-to-school gear this August. College students in need of dorm room decor can also expect to find sales, especially on linens. Everything from sheets to towels will be discounted in August as retailers jump on offering deals for back-to-school shopping right before fall semester.

"Laptops hit some of their best prices outside of Black Friday [in August]," said Glaser. With many newer models coming out this fall, most companies are trying to push out older models to make room for the new. Not to mention, many stores include laptops — and even some desktop computers — in back-to-school sales just before school begins.

"Students don't need to pay more than $500, and as little as $350, for a laptop that will be fine for web surfing, streaming videos and word processing. Look for deals from ... Dell, HP, Lenovo and Asus."

Continue your shopping with the best-selling books on Amazon of 2016 so far:

Worst Things to Buy in August

It might be tempting to try to purchase certain electronics or a new fall wardrobe this month, but August is the worst time to do those things. Here's what to avoid spending money on in August, so you don't go over your budget.

Amazon, Apple and Google historically release new products in September, or sometimes in November, so hold off on any new smartphone or tablet purchases until then. The "iPhone 7," for example, is expected to be released in early September. As for a new iPad Air — the iPad Air 3 — it might not be released until spring 2017.

Either way, it's smartest to wait on the newer devices to be announced. That way, you can get a brand new one with the best features, or get a steep discount on older models as they'll be discounted to make room for newer models.

Although you will see fall clothing appear in stores for the new school year, some at decent discounts, it's better to wait until spring to buy. As with most things, it's always cheapest to buy things out of season. So avoid temptation if you can wait until the end of the season to get some new wardrobe staples.

The rule of thumb is to always wait to purchase a TV until Black Friday. Although some college dorm deals boast great prices on TVs, nothing will be as deeply discounted as they are in November, according to Consumer Reports. So unless you really must have a new TV this fall, you and your bank account are better off waiting until Black Friday.

Check Out: Easy Ways You Can Score Thousands of Dollars in Free Stuff

Whether you're taking advantage of a tax-free day in your state or getting ready to upgrade your iPhone, always know when to buy and when to wait. Use this list to help you only buy items when they're the cheapest.

More from GOBankingRates:
Here's the first thing you should do with every paycheck
What to do with your first million
7 underrated work skills that will get you a raise