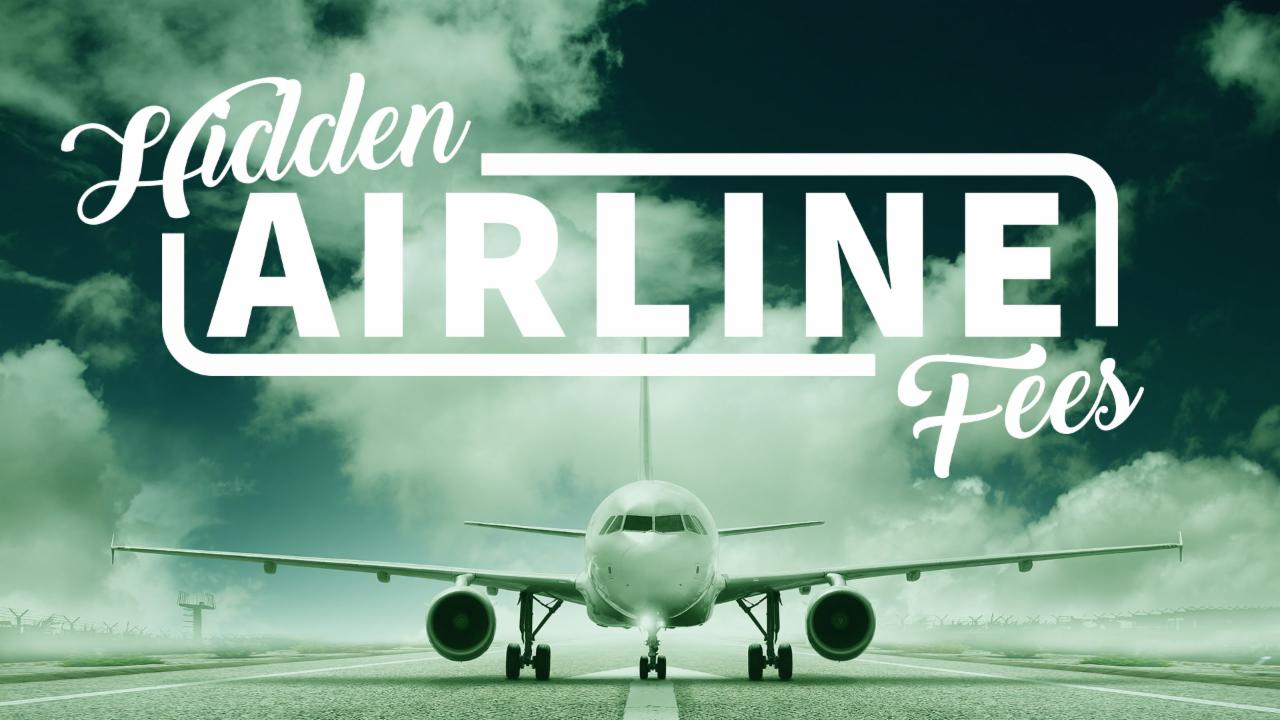 Traveling by airplane typically gets you from point A to point B faster than taking a car, bus or train — but speed comes with a price tag. A single round-trip ticket can cost hundreds of dollars. But even if you're mentally prepared for a high ticket price, some of the added travel costs associated with flying might throw you for a loop.

Today, airlines know how to nickel-and-dime their passengers. There was a time when airline tickets included free checked bags and airlines offered free drinks, free snacks and other freebies to enhance the flying experience. But in 2015, baggage fees brought in $3.8 billion for 13 U.S. carriers, according to a report from the Bureau of Transportation Statistics.

Checked baggage fees are nothing new, so many travelers know what to expect cost-wise. Other airline fees, however, aren't necessarily common knowledge for everyone. Although airlines disclose their travel costs on their websites, you might have to do some digging to understand what you're paying. Here are seven hidden airline fees to watch out for.

Since the purpose of booking a flight is to get from one city to the next, it might seem odd to pay an additional fee to select your seat on the plane. But this is becoming more common among major and low-cost carriers such as American, Spirit and Allegiant Air.

Spirit charges a fee starting at $5 for customer-requested seat assignments, Allegiant Air charges up to $80 for a seat selection, and fees start at $20 for American. If you don't select a seat in advance, you're assigned a random seat at check-in at no cost. Allowing the system to pick your seat at random means you avoid the extra charge, but you're not guaranteed a seat with friends or family.

Stuffing all your items into a carry-on bag is one way to avoid a checked bag fee — as long as the size of the bag is within the dimensions allowed by the airline and fits into the overhead bin. Carriers like American, Delta and United allow passengers to bring one personal item and one carry-on bag in-cabin at no extra charge. This isn't the policy of every airline, so do your homework before booking a flight.

Spirit and Allegiant Air both charge a fee for carry-on luggage. Allegiant's fee is $10 to $75 for one carry-on bag, and Spirit charges $26 to $100 for a carry-on bag. With certain ticket purchases, Frontier allows one free personal item and one free carry-on bag, otherwise carry-on fees start at $30. If the bag is heavier than 35 pounds, you'll have to gate-check it and pay a hefty price tag of $60.

Fortunately, you can avoid or reduce this cost. With Spirit and Allegiant Air, it's often cheaper to check your luggage than carry-on. Checked baggage fees start at $32 for Spirit and $18 for Allegiant Air.

Between travel websites and travel apps, booking an airline reservation has never been easier or more convenient. But some people are old-school and prefer booking their reservations directly with a customer service agent. To each his own. This is an option, but according to Kendal Perez, savings expert with CouponSherpa.com, you'll pay more for booking airfare directly with a reservationist.

If you don't want to deal with online booking systems or pay extra to speak with a live person, fly Delta. The airline recently waived its phone reservations fee, according to an announcement by the airline.

RELATED: Check out the most-loved airlines of 2016:

It's still possible to fly standby today, but few airlines offer this service for free. "Airlines used to be a little more lax about catching a standby flight if there was a seat available on an earlier flight," said Maggie McCombs, content marketer at Creative Lodging Solutions, a travel management company. "Now you have to pay for that luxury."

Be prepared to dig into your pocket if you want or need a standby flight. Flying standby with American and Delta costs $75 and $50, respectively. You pay the upfront fee to add your name to the standby list, but your credit card isn't charged until you have a confirmed seat.

Several airlines have adopted this fee, but select customers traveling between certain cities can fly standby at no cost with Alaska Airlines. Other airlines offer complimentary standby to select passengers only. For example, Business Select and Anytime Fares can standby for free with Southwest. Additionally, American offers complimentary same-day standby to Business and First-Class ticket holders, AirPass members, Choice Plus fares, as well as active U.S. military personnel.

If your child between the ages of 5 and 15 travels alone, you're required to pay an additional unaccompanied minor fee. You're allowed to accompany your child to the gate, and he or she will then be supervised while seated on the plane and escorted to any connecting flights.

This service offers peace of mind, but it's not included in the ticket price. Many airlines, including United and Delta, charge $150 both ways for an unaccompanied minor. The good news is that you're not required to pay this fee once your child turns 15 or 16, depending on the airline.

This fee is unavoidable, but you can save money by booking unaccompanied minors on Virgin Airlines, which only charges $75-$125 based on the flight.

Some airlines are pet-friendly and allow passengers to fly with small animals in-cabin in approved kennels. But the pet doesn't count as a free carry-on. Even if the kennel is small and fits under your seat, airlines charge a fee for bringing animals into the cabin. Both United and Delta charge $125 each way for carry-on pets. Additionally, Delta charges $200 each way for pets checked as cargo.

You can't avoid this fee, but you can shop around and compare costs. Virgin Airlines allows pets to fly in the main cabin for $100.

Depending on the length of your flight, you might want to get comfortable and take a nap. If so, make sure you bring your own blanket and pillow, or be prepared to open your wallet.

Paying extra for airline services that used to be free can seem like a rip-off and an unfair way to bleed your travel budget. Although you can't control airline fees, you can become a savvy consumer and learn about hidden airline fees. If you know what to expect cost-wise before booking your flight, you can plan accordingly and avoid surprises.

Related: 10 Insider Secrets to Get a Free Flight

More from GOBankingRates:
Here's the first thing you should do with every paycheck
What to do with your first million
7 underrated work skills that will get you a raise