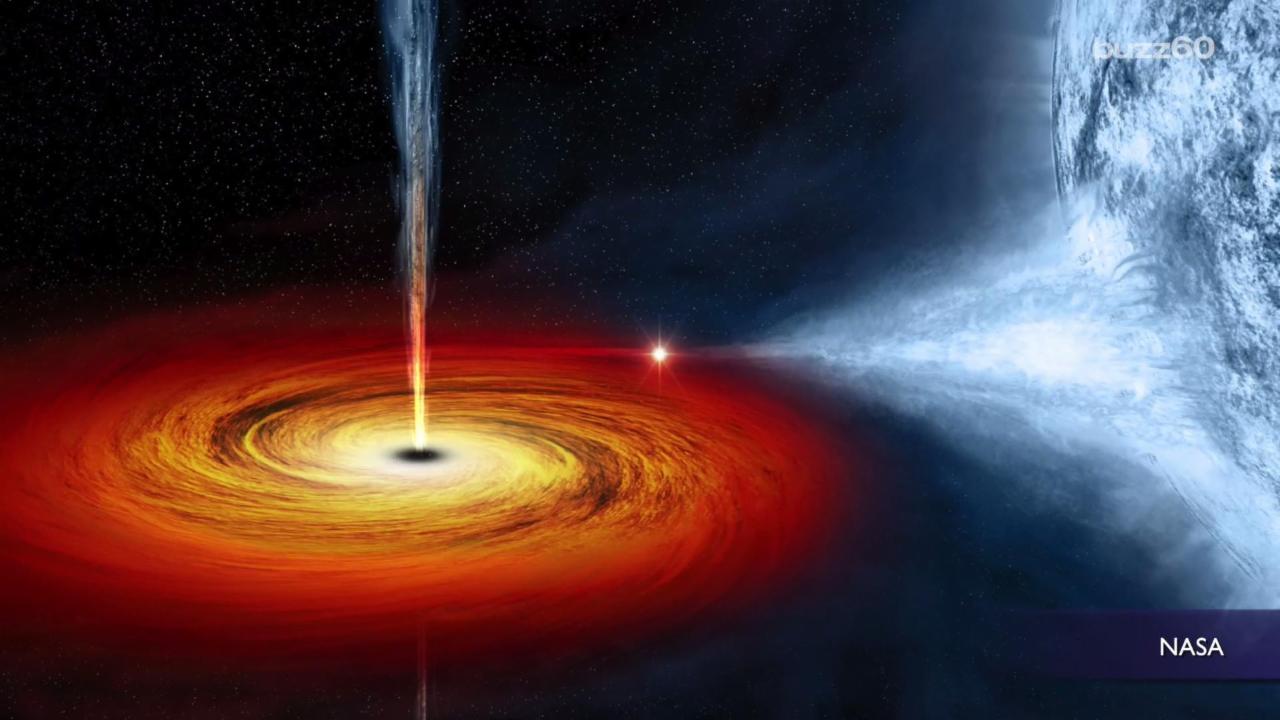 A 30-year-long question about black holes has finally been resolved.

Apparently, black holes twist space time like taffy. This finding is based off a principle put forward by renowned scientist, Albert Einstein.

Einstein predicted large, dense objects that have a lot of gravity will bend time and space as they spin.

The fascination with black holes did not end with Einsten. Satellites from the European Space Agency and NASA have been examining these scientific marvels, specifically x-ray light that flickers in an interesting pattern.

Their conclusions are being summed up in a press release from Adam Ingram of the University of Amsterdam.

Ingram said the gravitational vortex was predicted, but is now said to be more like "twisting a spoon in honey."

In this metaphor, the honey resembles space, and anything embedded in the honey will be dragged around by a twisting spoon.

He also added that this discovery means anything orbiting a spinning object will have its motion affected.

It's worth mentioning how incredible Einstein's mind was. His theoretical findings of general relativity were published in 1915, and we're still unpacking it in 2016.

To put it into perspective: general relativity was invented before even the hamburger bun, which came out in 1916!

A computer simulation shows the collision of two black holes, a tremendously powerful event detected for the first time ever by the Laser Interferometer Gravitational-Wave Observatory, or LIGO. LIGO detected gravitational waves, or ripples in space and time generated as the black holes spiraled in toward each other, collided, and merged. This simulation shows how the merger would appear to our eyes if we could somehow travel in a spaceship for a closer look. It was created by solving equations from Albert Einstein's general theory of relativity using the LIGO data.

The National Science Foundation (NSF) has announced the detection of gravitational waves by the Laser Interferometer Gravitational-Wave Observatory (LIGO), a pair of ground-based observatories in Hanford, Washington, and Livingston, Louisiana.

Albert Einstein predicted the existence of gravitational waves in his general theory of relativity a century ago, and scientists have been attempting to detect them for 50 years. Einstein pictured these waves as ripples in the fabric of space-time produced by massive, accelerating bodies, such as black holes orbiting each other. Scientists are interested in observing and characterizing these waves to learn more about the sources producing them and about gravity itself.

This is an artist's impression of gravitational waves generated by binary neutron stars.

Also shown is an outflowing jet of energetic particles, believed to be powered by the black hole's spin. The regions near black holes contain compact sources of high energy X-ray radiation thought, in some scenarios, to originate from the base of these jets. This high energy X-radiation lights up the disk, which reflects it, making the disk a source of X-rays. The reflected light enables astronomers to see how fast matter is swirling in the inner region of the disk, and ultimately to measure the black hole's spin rate.

This diagram shows how a shifting feature, called a corona, can create a flare of X-rays around a black hole. The corona (feature represented in purplish colors) gathers inward (left), becoming brighter, before shooting away from the black hole (middle and right). Astronomers don't know why the coronas shift, but they have learned that this process leads to a brightening of X-ray light that can be observed by telescopes.

Normally, before a black hole's corona shifts, there is already an effect at work called relativistic boosting. As X-ray light from the corona reflects off the black hole's surrounding disk of material -- which is traveling near half the speed of light -- the X-ray light becomes brightened, as seen on the left side of the illustration. This boosting occurs on the side of the disk where the material is traveling toward us. The opposite effect, a dimming of the X-ray light, occurs on the other side of the disk moving away from us.

Another form of relativistic boosting happens when the corona shoots away from the black hole, and later collapses. Its X-ray light is also brightened, as the corona travels toward us leading to X-ray flares.

In 2014, NASA's Nuclear Spectroscopic Telescope Array, or NuSTAR, and Swift space telescopes witnessed an X-flare from the supermassive black hole in a distant galaxy called Markarian 335. The observations allowed astronomers to link a shifting corona to an X-ray flare for the first time.

In this artist's illustration, turbulent winds of gas swirl around a black hole. Some of the gas is spiraling inward toward the black hole, but another part is blown away.

A black hole is a place in space where gravity pulls so much that even light can not get out. The gravity is so strong because matter has been squeezed into a tiny space. This can happen when a star is dying.

How Big Are Black Holes?
Black holes can be big or small. Scientists think the smallest black holes are as small as just one atom. These black holes are very tiny but have the mass of a large mountain. Mass is the amount of matter, or "stuff," in an object.

Supermassive black holes at the cores of galaxies blast radiation and ultra-fast winds outward, as illustrated in this artist's conception. New data from NASA's Nuclear Spectroscopic Telescope Array (NuSTAR) and the European Space Agency's (ESA's) XMM-Newton telescopes show that these winds, which contain gases of highly ionized atoms, blow in a nearly spherical fashion, emanating in every direction, as shown in the artwork. The findings rule out the possibility that the winds blow in narrow beams.

With the shape and extent of the winds known, the researchers were able to determine the winds' strength. The high-speed winds are powerful enough to shut down star formation throughout a galaxy.

The artwork is based on an image of the Pinwheel galaxy (Messier 101) taken by NASA's Hubble Space Telescope.

A supermassive black hole is depicted in this artist's concept, surrounded by a swirling disk of material falling onto it.

In July 2015, researchers announced the discovery of a black hole, shown in the above illustration, that grew much more quickly than its host galaxy. The discovery calls into question previous assumptions on the development of galaxies. The black hole was originally discovered using NASA's Hubble Space Telescope, and was then detected in the Sloan Digital Sky Survey and by ESA's XMM-Newton and NASA's Chandra X-ray Observatory.

Benny Trakhtenbrot, from ETH Zurich's Institute for Astronomy, and an international team of astrophysicists, performed a follow-up observation of this black hole using the 10 meter Keck telescope in Hawaii and were surprised by the results. The data, collected with a new instrument, revealed a giant black hole in an otherwise normal, distant galaxy, called CID-947.

NASA's Wide-field Infrared Survey Explorer, or WISE, helped lead astronomers to what appears to be a new example of a dancing black hole duo. Called WISE J233237.05-505643.5, the suspected black hole merger is located about 3.8 billion light-years from Earth, much farther than other black hole binary candidates of a similar nature.

An extraordinary outburst produced by a black hole in a nearby galaxy has provided direct evidence for a population of old, volatile stellar black holes. The discovery, made by astronomers using data from NASA's Chandra X-ray Observatory, provides new insight into the nature of a mysterious class of black holes that can produce as much energy in X-rays as a million suns radiate at all wavelengths.

Researchers used Chandra to discover a new ultraluminous X-ray source, or ULX. These objects give off more X-rays than most binary systems, in which a companion star orbits the remains of a collapsed star. These collapsed stars form either a dense core called a neutron star or a black hole. The extra X-ray emission suggests ULXs contain black holes that might be much more massive than the ones found elsewhere in our galaxy.

(Photo via X-ray: NASA/CXC/Curtin University/R. Soria et al., Optical: NASA/STScI/ Middlebury College/F. Winkler et al.)
Did you know that a black hole could hurtle like a cannonball? Well, the Hubble Space Telescope found such an object – making this phenomena the image of the year in 2002. Astronomers were able to track the hole because it had a companion star – a black hole cannot be seen on its own because it swallows light. The theory is, which furthered by this image, that claims that black holes are created when a star dies in a violent supernova. (Photo via NASA)

The center of the Milky Way galaxy, with the supermassive black hole Sagittarius A* (Sgr A*), located in the middle, is revealed in these images. As described in our press release, astronomers have used NASA’s Chandra X-ray Observatory to take a major step in understanding why material around Sgr A* is extraordinarily faint in X-rays.

The large image contains X-rays from Chandra in blue and infrared emission from the Hubble Space Telescope in red and yellow. The inset shows a close-up view of Sgr A* in X-rays only, covering a region half a light year wide. The diffuse X-ray emission is from hot gas captured by the black hole and being pulled inwards. This hot gas originates from winds produced by a disk-shaped distribution of young massive stars observed in infrared observations.

These new findings are the result of one of the biggest observing campaigns ever performed by Chandra. During 2012, Chandra collected about five weeks worth of observations to capture unprecedented X-ray images and energy signatures of multi-million degree gas swirling around Sgr A*, a black hole with about 4 million times the mass of the Sun. At just 26,000 light years from Earth, Sgr A* is one of very few black holes in the universe where we can actually witness the flow of matter nearby.

This image, taken with the European Southern Observatory’s Very Large Telescope, shows the central region of galaxy NGC1313. This galaxy is home to the ultraluminous X-ray source NCG1313X-1, which astronomers have now determined to be an intermediate-mass black hole candidate. NGC1313 is 50,000 light-years across and lies about 14 million light-years from the Milky Way in the southern constellation Reticulum. (Photo via ESO)

Lower-left: A color image from NASA's Hubble Space Telescope of one of the nine galaxies targeted by NuSTAR in search of hidden black holes.

Bottom-right: An artist's illustration of a supermassive black hole, actively feasting on its surroundings. The central black hole is hidden from direct view by a thick layer of encircling gas and dust.

More from AOL.com:
Pokémon Go is catching more love than Tinder in downloads
What your old Apple products are worth today
Why the biggest Vine star is ready to leave the platform