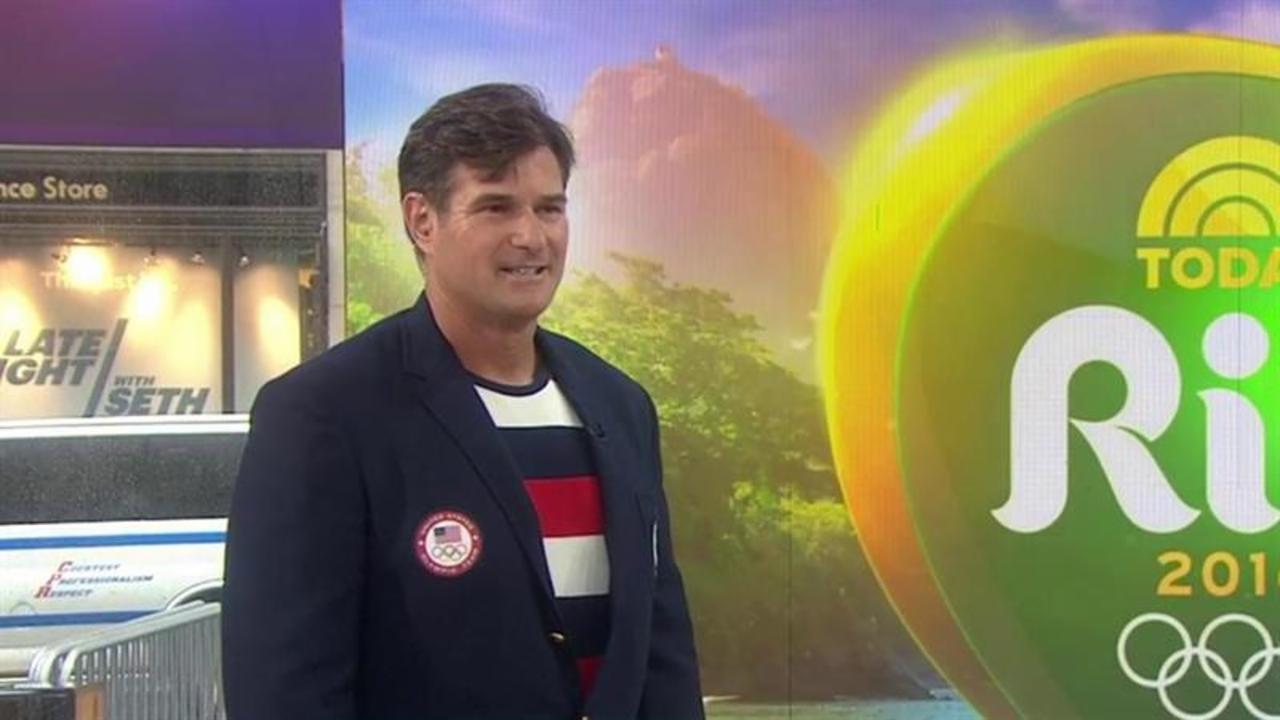 With just a week until the Opening Ceremony of the Rio 2016 Olympic Games, Ralph Lauren unveiled both the groundbreaking new apparel concept for Team USA's flag bearer, which will light the way for American athletes entering Maracanã Stadium on Aug. 5, and the official Opening Ceremony parade uniform.

Polo Ralph Lauren's 2016 Team USA Opening Ceremony parade uniform is fresh and sporty, with classic elements, and features an all-American palette of red, white and blue. Team USA will be outfitted in a deep navy blazer complemented by gold buttons, repp-stripe trim and a signature embroidered Polo Pony. The combination of the jacket with a classic striped T- shirt and selvedge white denim jeans with inspirational details creates a polished ensemble. Classic boat shoes get the team treatment in navy, white, and red. Striped cotton bracelets and navy grosgrain belts offer the perfect touch of sport and style.

Polo Ralph Lauren's commemorative Flag Bearer Jacket is the ultimate integration of innovation, fashion and technology. The jacket was exclusively designed for the flag bearers of the U.S. Olympic and Paralympic Teams.

"The Flag Bearer Jacket will literally light the way for Team USA as they represent our country in the Opening Ceremony of the Olympic Games. This groundbreaking jacket exemplifies Ralph Lauren's continued exploration of the intersection of fashion and technology. For an athlete, being chosen as the flag bearer for Team USA is an extraordinary honor, and we wanted to pay tribute to that position." says David Lauren, Executive Vice President, Global Advertising, Marketing & Communications. "Ralph Lauren is incredibly proud to dress America's best and brightest athletes at the world's premier sporting event." 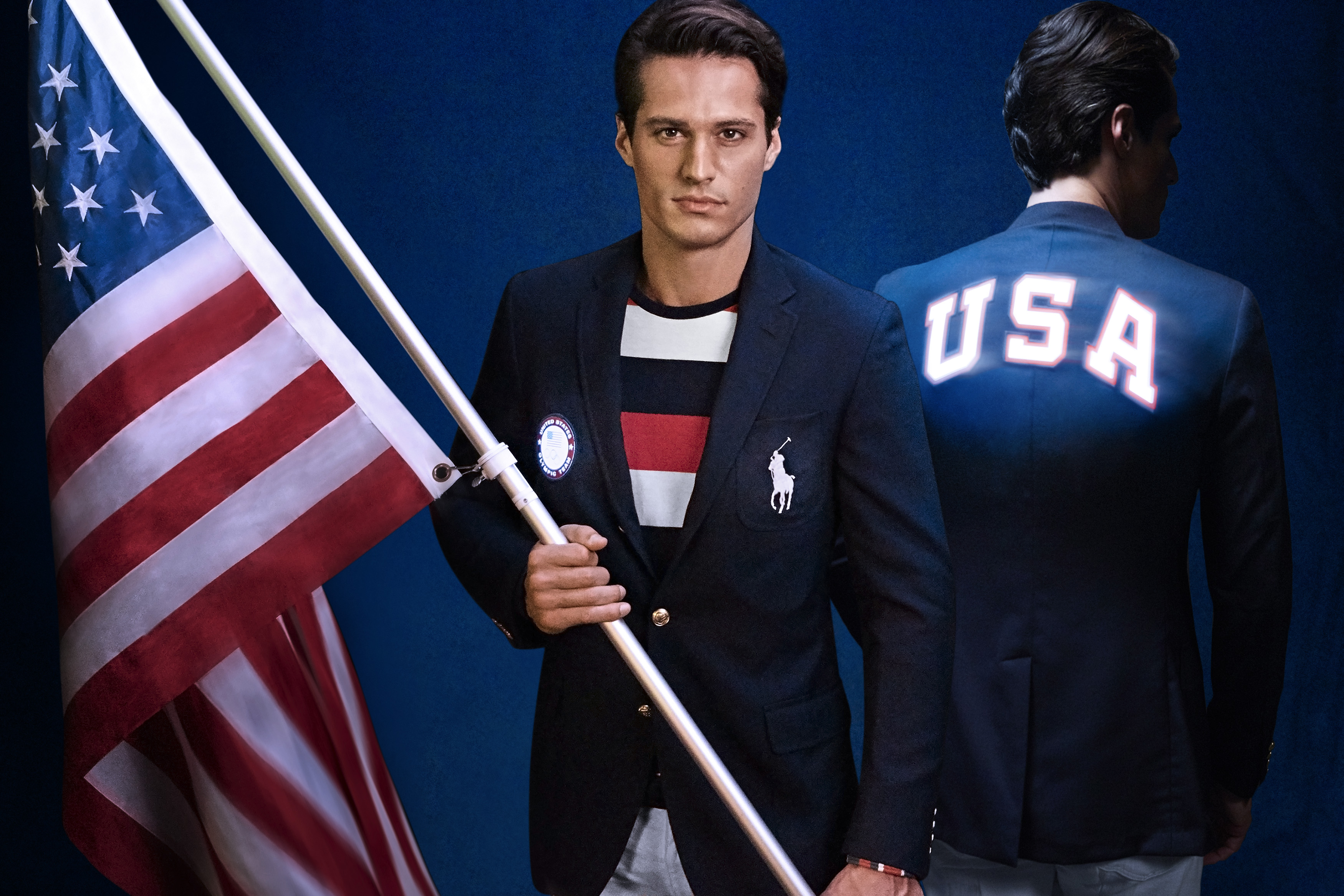 Being chosen as flag bearer is among the most prestigious distinctions bestowed on an Olympic or Paralympic athlete, and throughout the Modern Games, U.S. flag bearers have a long history of embodying the values of the Olympic Movement. The illuminated elements of the Flag Bearer Jacket are designed to spotlight the great honor that comes with the position. The athlete is selected by his or her fellow Team USA teammates through a voting process. The USOC will announce the flag bearer for the 2016 U.S. Olympic Team by Aug. 4.

To further support and celebrate Team USA, The Polo Ralph Lauren Foundation today launched the "Like to Light" campaign on social media. For every post shared or liked on Instagram, Twitter or Facebook using the hashtag #LikeToLight from July 29, 2016 until August 6, 2016, The Polo Ralph Lauren Foundation will donate $1 (up to a maximum of $100,000) to the United States Olympic Committee's Team for Tomorrow program - a community outreach program dedicated to spreading the Olympic and Paralympic values of excellence, friendship, and respect. Visit www.ralphlauren.com/file_source/teamusa/liketolight/rules.html for program rules.

On behalf of Ralph Lauren and the #LikeToLight campaign, former Olympics athlete Cliff Meidl sat with AOL.com to discuss the Olympics, his career, where he finds motivation and much more.

Q: What do you remember about that incredible moment?

A: First of all, being a flag bearer is incredible. I was the 19th flag bearer in the history of modern Olympics games, and it's one of the highest awards that an Olympian can get. To be selected as a flag bearer, the U.S. takes it very seriously because there's a voting committee and a systematic voting process. At that moment, though, I remember that I couldn't believe it when I was elected. Then reality hit that night, walking into ceremony with over 100,000 people there. I was so nervous, thinking 'OK, carry this with pride and carry this with honor.' I took a deep breath to calm nerves and I ended up looking over at left shoulder. The only thing I could see was red, white and blue. It was an incredible honor.

Q: How were you introducing to kayaking, and was that always a goal of yours, to become an Olympian?

A: I had a long road to the Olympic games. When I was 20, I was nearly killed on a construction job site and nearly lost my legs, and I didn't know what to do. What I ended up doing was engaging in a rigorous rehab program and that's what brought me to kayaking. After an extensive road, working hard, I made the Olympics in Atlanta in 1996. My childhood dream was being an Olympian, so to be a flag bearer after getting through adversity, it was incredible. It's a common theme with Olympians -- going through adversity, but then being your best at that moment.

Q: Were you into other sports before you sparked a passion for kayaking?

A: Oh, yes, I ran track and field, I played soccer and did martial arts. I was very sport oriented. It was hard losing the ability to do any of that. But then my brother reintroduced me to canoeing. He kind of pushed me to persevere and it led me to being kayaking.

Q: If you could offer once piece of advice to first-time Olympians, what would that be?

A: I would say, take in all these moments. We're there for a job and there for a goal. Everybody's dream is to be on that podium. It happens for some, but not for all. It happens every four years. Will you make it again? It's bleak because I think only 15% athletes go back again. So, I'd say to enjoy.

Q: As a motivational speaker, what is the biggest message you try to convey to youth?

A: My big message is trust. You have to trust in yourself. So many times you never know if there's gonna be light at the end of the tunnel, but if you believe, 'yes I am going to accomplish my dream', the rest is grit -- rolling up your sleeves and working harder than anybody else. It applies to anything you face in life. You have to love what you do and be the best person you can be and trust yourself. It's the main ingredient for us as humans to overcome adversity and springboard to success.

More from AOL.com:
Who designs the Olympic uniforms for the United States?
11 days before the Rio Olympics, athletes are refusing to move into the 'uninhabitable' Olympic Village
More 'B Team' than 'Dream Team' as U.S. eyes Rio basketball gold