Balloon popping is a serious job after the convention ends 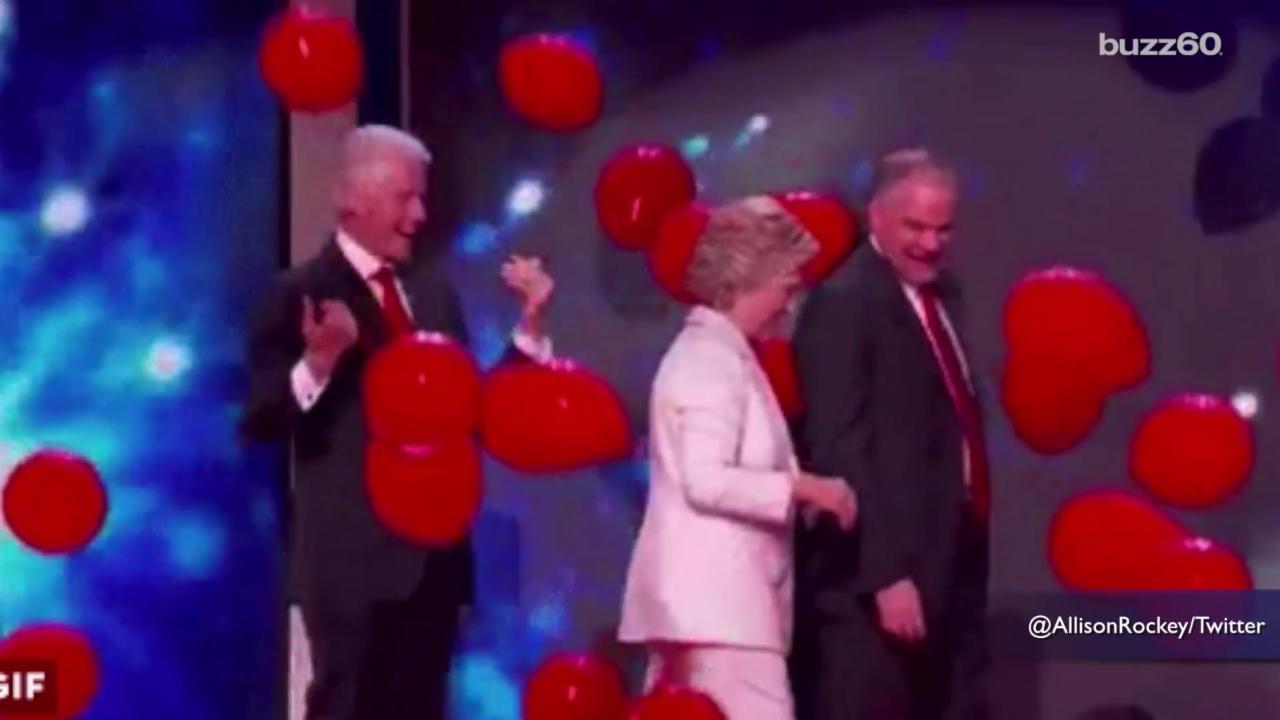 Balloons fill a child's heart with glee, and quite obviously, they bring joy to those who are young at heart as well.

Hours of work are spent filling them, and the drop lasts about a minute.

And, after that fun filled minute, the result is a hundred thousand balloons on the floor.

So, what exactly happens to all the balloons once they're fallen?

Thanks to Twitter, we are able to watch the balloon popping party happen.

One guy summoned his inner caveman and just bit the balloons to pop them.

Others used one pin at a time.

And Another guy used a razor blade.

The question remains are these people getting paid an hourly rate or are they volunteers who just love to pop things?

Best Instagrams of the Democratic National Convention
It's here!! Let's do this. #DemsInPhilly
It's that time again... Another city and another convention 🇺🇸This week we're in #philadelphia, #pennsylvania, covering the Democratic National Convention. Tonight happens to be friends and family night at our very own #CNNGrill, so we're delighted to have our friend @stephencolbert in the house 👍cc @colbertlateshow #DemsInPhilly #DemConvention (📷 via @mdornic) Cheers! 🍻
Stephen Colbert dresses as #CaesarFlickerman in a #HungerGames spoof on the #DemConvention floor, where he filmed a special edition of the #TheLateShow. More than 25 other celebrities are heading to the #DNC, some to support #HillaryClinton and others to protest. For the list 📲 cnn.it/politicsinsta 📷 Aaron P. Bernstein/Getty Images #DemsInPhilly #DemocraticConvention #Philadelphia #StephenColbert #Democrats #politics #CNN #TheHungerGames
Made. In. America... First stop, philly cheese steak. #dnc2016 #lookma #imwithher #demsinphilly #phillydnc2016 #unitedwefeast
Live at the AAPI Caucus! #aapiatdnc #demsinphilly #clintonkaine2016
#DemsinPhilly
"We are here tonight because America faces a choice – the choice of a new President. On one side is a man who inherited a fortune from his father and kept it going by cheating people and skipping out on debts. A man who has never sacrificed anything for anyone. A man who cares only for himself—every minute of every day. On the other side is one of the smartest, toughest, most tenacious people on the planet—a woman who fights for children, for women, for health care, for human rights—a woman who fights for all of us—, and who is strong enough to win those fights. We’re here today because our choice is Hillary Clinton! I’m with Hillary!" —@ElizabethWarrenMA #DemsInPhilly
"Hillary has spent decades doing the relentless, thankless work to actually make a difference in their lives. Advocating for kids with disabilities as a young lawyer, fighting for children’s health care as First Lady and for quality child care in the senate. And when she didn’t win the nomination eight years ago, she didn’t get angry or disillusioned. Hillary did not pack up and go home because as a true public servant, Hillary knows that this is so much bigger than her own desires or disappointments, so she proudly stepped up to serve our country once again as secretary of state, traveling the globe to keep our kids safe. And, look, there were plenty of moments when Hillary could’ve decided that this work was too hard, that the price of public service was too high, that she was tired of being picked apart for how she looks, or how she talks, or even how she laughs. But here's that thing: what I admire most about Hillary is that she never buckles under pressure, she never takes the easy way out, and Hillary Clinton has never quit on anything in her life." —First Lady @MichelleObama #DemsInPhilly
"Here in Philadelphia, let us declare again, that we will be a free people. Free from fear and intimidation. Let us declare againthat we are a nation of interdependence, and that in America love always trumps hate. Let us declare, so that generations yet unborn can hear us. We are the United States Of America, our best days are ahead of us." —@CoryBooker #DemsInPhilly
Setting the stage for a historic Democratic National Convention.
Just one more for tonight, because isn't @michelleobama just the best?!?! 💙💕💙 #demsinphilly #DemConvention 📸@erinschaff
Thank you to everyone who tuned in, turned out and is standing up for our Democratic values. That's a wrap on night one - see you in the AM for more Caucuses and Councils. #demsinphilly #DemConvention
Up Next

More from AOL.com:
Donald Trump defends RNC in interview: 'I wasn't looking for star power, I was looking for policy'
Donald Trump ranted about all the DNC speakers on Twitter -- except one
Snapchat expert Mark Kaye on how social media influences an election