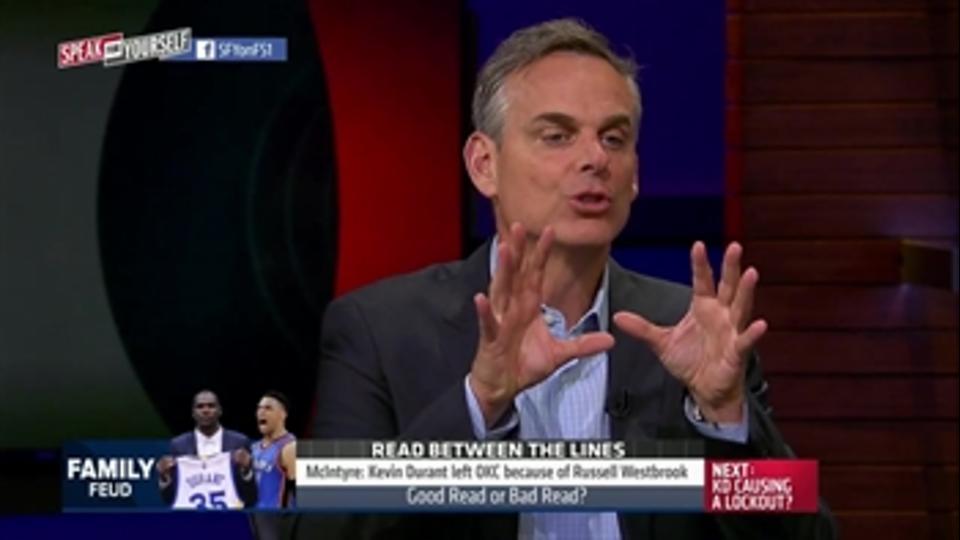 Poor Oklahoma City, poor Russell Westbrook. The departure of Kevin Durant in free agency, to none other than their rival Golden State Warriors, crushed the Thunder, their fans, and the entire city. Russell Westbrook is now left as the sole superstar on a team that could have had three (Westbrook, James Harden, Durant) if their recent history played out a little differently. He has a chance to go more furiously supersonic than ever and take over, racking up more triple-doubles in a defiant testament to himself and Oklahoma City that he can win a title by himself with their remaining talent.

Of course, that won't happen. Somewhere around the sixth seed in the Western Conference seems like a far more realistic target for the Thunder. That being said, if they can't renegotiate Westbrook to a new max contract this summer, they may be forced to trade him to avoid losing him for nothing in 2017 free agency.

It's a tough situation for Westbrook, and what makes it even tougher is that Durant reportedly told him he'd be staying put. ESPN's Royce Young said the following on a podcast about the Thunder's future:

Three weeks ago, Kevin Durant's sitting there at dinner, telling him "Hey, I'm coming back, man. Don't worry about it." And now, Russell Westbrook has been kind of thrown into this in having to decide his future a summer earlier than expected.

If Durant said that, his departure to Golden State is obviously far more painful to Westbrook. Like everyone else, he would have expected the former MVP to stay put, running on competitive spirit to defeat the Warriors after going up 3-1 in the Conference Finals, not running to a fresh start with a new team for endless championship chances.

At the same time, while it's unfair for Durant to put Westbrook's mind at ease before going against his word, he may have had no intention to follow through with a return to OKC. His mind must have gone back and forward throughout his free agency process. If he had clear intentions to join the Warriors, he may have been hesitant to reveal that to those in the Thunder organization he didn't want to disappoint.

That could still be the case, but Young commented further that Durant went as far as looking into buying a new house in Oklahoma City, hinting at a desire to stay:

Kevin Durant, more so than even that, was telling people, "Hey, yeah, I mean I'm coming back." Like I said in there, a week before Kevin Durant sat down in the Hamptons, he was in Oklahoma City ready to make an offer on a multi-million-dollar house. So, the guy was pretty serious about coming back, and then things turned rather quickly for him to leave. And there's no doubt that the organization felt a little bit burned by this.

This entire drama won't go away any time soon, especially with Russell Westbrook's future being so up in the air.

It's hard to know exactly what happened between the two Thunder superstars before everything changed, as some communications between the two could have easily gone unreported. We can never know everything that was said and what Durant's intentions were all along and how they changed.

However, if Kevin Durant really did say he'd stay or gave any indication to an optimistic Thunder organization that there was nothing to worry about, the criticism for him as the NBA's new villain will only increase.

More from FanSided:
Greatest Olympian from every state
Gilmore Girls release date and teaser (Video)
The next generation of NBA bigs