Michelle Obama and Demi Lovato rallying for Clinton at DNC 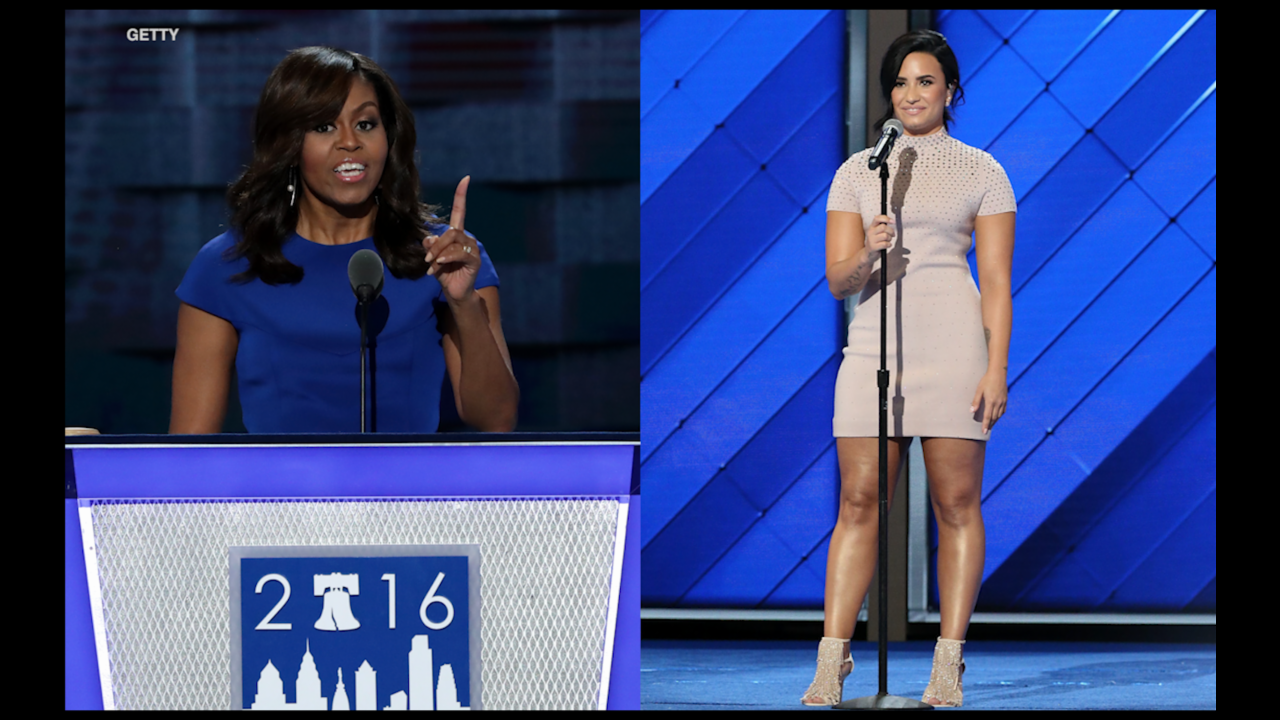 "This election and every election is about who will have the power to shape our children for the next four or eight years of their lives," she said.

The first lady also described how Clinton paved the way for her own daughters' success, saying "Because of Hillary Clinton, my daughters and our sons and daughters now take for granted that a woman can become president of the United States."

While not explicitly mentioning Donald Trump, she warned against a president who would be a poor role model. She said the country needs "someone who understands that the issues a president faces are not black or white and can not be boiled down to 140 characters."

"I'm proud to support a presidential candidate who will fight to ensure all people with a mental health condition will get the care they need to live fulfilling lives," Lovato said, "That candidate is Hillary Clinton."

She described her own experiences with mental illness and urged politicians to support better health care, saying "This is not politics, it's simply the right thing to do."

Social reactions to Michelle Obama's DNC speech
Incredible speech by an incredible woman. Couldn't be more proud & our country has been blessed to have her as FLOTUS. I love you, Michelle.
Dear LORD. I love me some @FLOTUS 😍 #DemsInPhilly #DNCinPHL
I ❤️ our First Lady, Michelle Obama! Nobody compares. #DemsInPhilly https://t.co/uEosENxdNL
Whoever you're for, admit it: Michelle Rocks. Go #FLOTUS
Alpha girl power from Michelle right now. Truly real and powerful endorsement.
God Bless you @FLOTUS!!!!! GOD BLESS AMERICA 🇺🇸🇺🇸🇺🇸🇺🇸🇺🇸🇺🇸
#StrongerTogether #DemsInPhilly https://t.co/K5kp9kQjg7
Tears. Chills. @MichelleObama #DNC so honored to be here.
Yes, @FLOTUS
Up Next

More from AOL.com:
Bernie Sanders' supporters shout him down at DNC
Donald Trump ranted about all the DNC speakers on Twitter -- except one
Karla Ortiz, the daughter of undocumented parents, impresses crowd at DNC with heartfelt speech