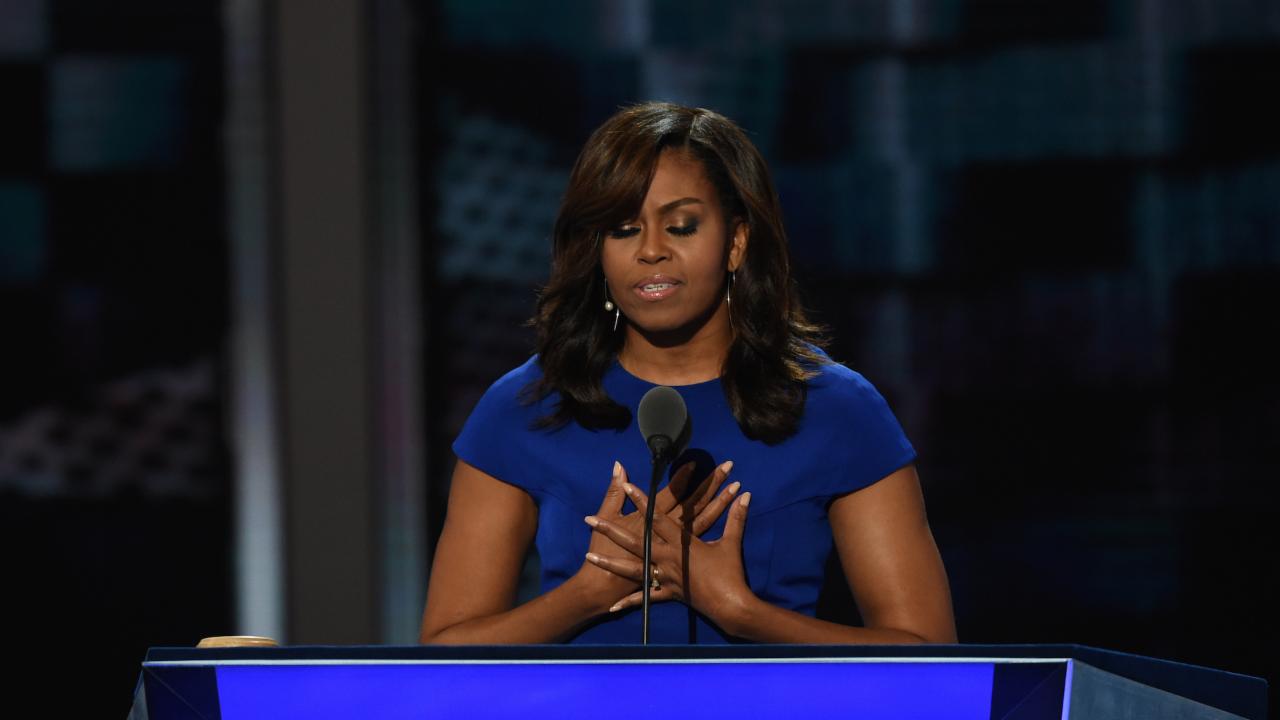 Michelle Obama took the stage on opening night of the Democratic Convention in Philadelphia on Monday and reminisced about her time as a parent in the White House, which she said was "built by slaves."

The first lady took frequent jabs at GOP nominee Donald Trump, stressing the merits of being a role model instead of a bully — and saying how the world isn't as terrible as some people describe it on TV. She said that a leader can't convey a message in 140 characters, a clear shot on Trump's habit of calling people out on Twitter.

Obama stressed that the upcoming election determines "who will have the power to shape our children for the next four or eight years," which coincides with Hillary Clinton's ad campaign portraying Trump as a poor role model.

She said Hillary has done the work to actually make a difference in the lives of children and "never buckles under pressure."

Obama sparked a huge applause from Clinton supporters in the audience when she mentioned that Clinton didn't "pack up and go home" when she lost to her husband Barack in 2008.

Social reactions to Michelle Obama's DNC speech
Incredible speech by an incredible woman. Couldn't be more proud & our country has been blessed to have her as FLOTUS. I love you, Michelle.
Dear LORD. I love me some @FLOTUS 😍 #DemsInPhilly #DNCinPHL
I ❤️ our First Lady, Michelle Obama! Nobody compares. #DemsInPhilly https://t.co/uEosENxdNL
Whoever you're for, admit it: Michelle Rocks. Go #FLOTUS
Alpha girl power from Michelle right now. Truly real and powerful endorsement.
God Bless you @FLOTUS!!!!! GOD BLESS AMERICA 🇺🇸🇺🇸🇺🇸🇺🇸🇺🇸🇺🇸
#StrongerTogether #DemsInPhilly https://t.co/K5kp9kQjg7
Tears. Chills. @MichelleObama #DNC so honored to be here.
Yes, @FLOTUS
Up Next

"Hillary Clinton has never quit on anything in her life," Obama continued. "Hillary understands that the presidency is about one thing and one thing only, leaving something better for our kids," she added.

Mocking Trump's "Make America Great Again" slogan, Obama said the country is great right now and that she can wake up every day in a house that was "built by slaves."

Michelle has been renowned for her strong public speaking long before tonight. Melania Trump famously delivered a speech on the opening night of the GOP convention last week that featured lines directly taken from Obama's speech at the 2008 Democratic National Convention.

Meredith McIver, an in-house staff writer with the Trump organization, took the blame and offered her resignation but it was denied.

"In working with Melania Trump on her recent First Lady speech, we discussed many people who inspired her and messages she wanted to share with the American people," McIver explained in a statement. "A person she has always liked is Michelle Obama. Over the phone, she read me some passages from Mrs. Obama's speech as examples. I wrote them down and later included some of the phrasing in the draft that ultimately became the final speech."