Some NFL season tickets come with a price -- before the price 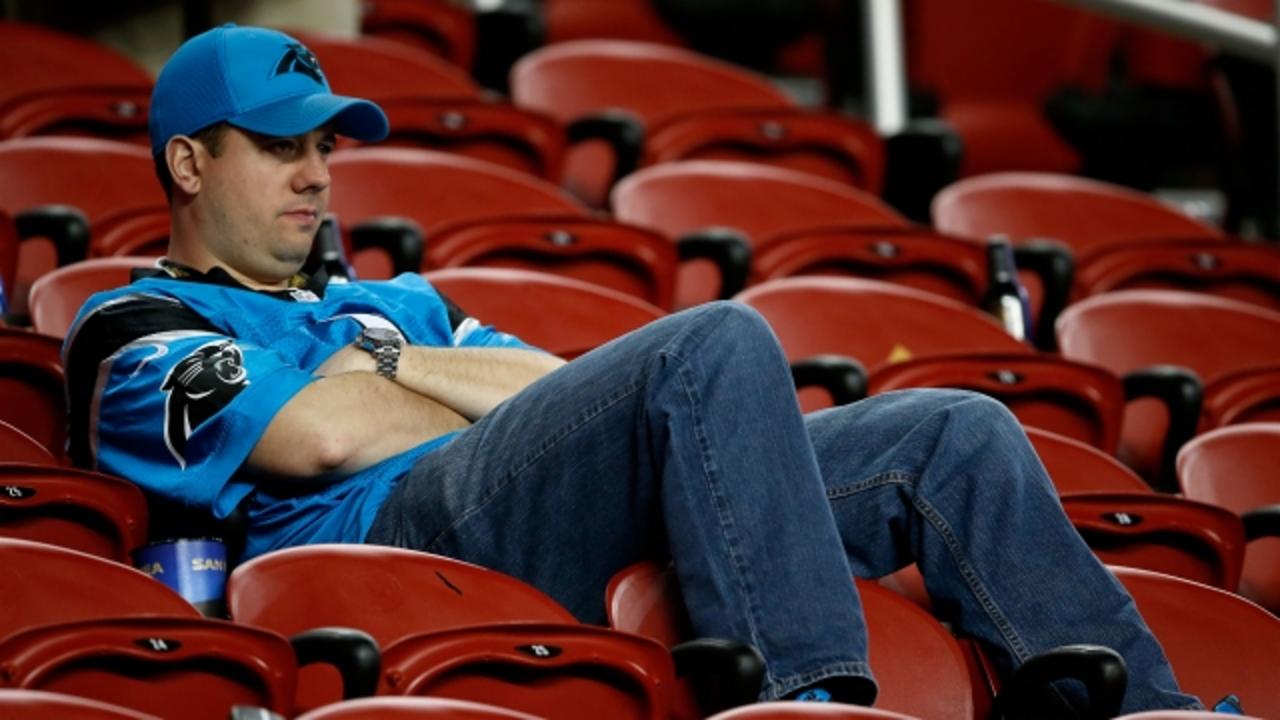 So let's say you're an NFL fan looking for season tickets. You might think you'd just go and pay money for the seats, but it's not that simple.

We're talking about a "personal seat license," or PSL. In other words, it's the right to be able to buy a season ticket. So essentially paying to pay for something. And for about half of NFL teams, it's the norm.

SEE ALSO: The easiest thing to win at Rio Games? A ticket

PSLs are mainly used by teams that recently opened up new stadiums. When the stadium is built, pretty much every seat comes with a price tag. To buy season tickets, you have to buy the seat.

The Minnesota Vikings are debuting their new stadium this year, and the PSLs that go with it. The cheapest PSL available was priced at $500, but more expensive seats can be three or four times that amount.

Of course, there are only a certain number of seats in a stadium. Once all the personal seat licenses are snatched up, you can only get one from another fan on the resale market. And that's when they can really get pricey.

And if you want to buy the rights to a field level seat at AT&T Stadium, home of the Dallas Cowboys, be ready to fork over more than a quarter of a million dollars.

RELATED: NFL players who retired over the 2016 offseason

NFL players who retired over the 2016 offseason
CHARLOTTE, NC - JANUARY 17: Marshawn Lynch #24 of the Seattle Seahawks looks on before the NFC Divisional Playoff Game against the Carolina Panthers at Bank of America Stadium on January 17, 2016 in Charlotte, North Carolina. (Photo by Ronald C. Modra/Sports Imagery/Getty Images)
✌🏿 https://t.co/wesip4IhOR
FOXBORO, MA - DECEMBER 24: Jerod Mayo #51 of the New England Patriots reacts after he sacked Matt Moore #8 of the Miami Dolphins in the second half at Gillette Stadium on December 24, 2011 in Foxboro, Massachusetts. (Photo by Jim Rogash/Getty Images)
RETIRING A PATRIOT.
BALTIMORE, MD - DECEMBER 27, 2015: Tight end Heath Miller #83 of the Pittsburgh Steelers watches the action from the sideline during a game against the Baltimore Ravens on December 27, 2015 at M&T Bank Stadium in Baltimore, Maryland. Baltimore won 20-17. (Photo by: Nick Cammett/Diamond Images/Getty Images)
After 11 seasons and two Lombardi trophies, Heath Miller retires in Black & Gold. 📰 | https://t.co/rUr3Yf1XPd https://t.co/RWH0yFgWab
DETROIT, MI - OCTOBER 25: Calvin Johnson #81 of the Detroit Lions looks on from the sidelines during the game against the Minnesota Vikings at Ford Field on October 25, 2015 in Detroit, Michigan. The Vikings defeated the Lions 28-19. (Photo by Mark Cunningham/Detroit Lions/Getty Images)
Calvin Johnson retires from the National Football League: https://t.co/8YgcYxLjNS https://t.co/IdC1yIMX8R
CHARLOTTE, NC - OCTOBER 25: Jared Allen #69 of the Carolina Panthers reacts after a sack of Sam Bradford #7 of the Philadelphia Eagles during their game at Bank of America Stadium on October 25, 2015 in Charlotte, North Carolina. The Panthers won 27-16. (Photo by Grant Halverson/Getty Images)
Riding off into the sunset https://t.co/wZXovseGKS
MINNEAPOLIS, MN - AUGUST 8: Corey Wootton #99 of the Minnesota Vikings looks on during the fourth quarter of the game against the Oakland Raiders on August 8, 2014 at TCF Bank Stadium in Minneapolis, Minnesota. The Vikings defeated the Raiders 10-6. (Photo by Hannah Foslien/Getty Images)
Thank you all for the support! https://t.co/wHQqWkAirF
DETROIT, MI - DECEMBER 07: Logan Mankins #70 of the Tampa Bay Buccaneers warms up prior to the start of the game gainst the Detroit Lions at Ford Field on December 7, 2014 in Detroit, Michigan. The Lions defeated the Buccaneers 34-17. (Photo by Leon Halip/Getty Images)
Ex-#Patriots & #Bucs G Logan Mankins was tough, nasty, played through the whistle… and is a great dude when the play ends. One of a kind.
JACKSONVILLE, FL - DECEMBER 13: Matt Hasselbeck #8 of the Indianapolis Colts drops back to pass during a game against the Jacksonville Jaguars at EverBank Field on December 13, 2015 in Jacksonville, Florida. The Jaguars defeated the Colts 51-16. (Photo by Stacy Revere/Getty Images)
It has been an honor and a pleasure. https://t.co/P9dnvll0EP https://t.co/69DlIa9W1y
EAST RUTHERFORD, NJ - DECEMBER 22: (NEW YORK DAILIES OUT) D'Brickashaw Ferguson #60 of the New York Jets greets fans after a game against the Cleveland Browns on December 22, 2013 at MetLife Stadium in East Rutherford, New Jersey. The Jets defeated the Browns 24-13. (Photo by Jim McIsaac/Getty Images)
Thank you for the numerous messages of support. It has been a blessing to be apart of the NYJ. My letter to you https://t.co/hcIRk41QtM
GLENDALE, AZ - AUGUST 24: Defensive tackle Darnell Dockett #90 of the Arizona Cardinals watches from the sidelines during the preseason NFL game against the San Diego Chargers at the University of Phoenix Stadium on August 24, 2013 in Glendale, Arizona. (Photo by Christian Petersen/Getty Images)
To the founder of the #BirdGang, @ddockett, congrats on a great career! #ThanksNineO WATCH»https://t.co/4NIBDcOr8K https://t.co/h0yNiF72UT
ORCHARD PARK, NY - SEPTEMBER 13: Percy Harvin #18 of the Buffalo Bills celebrates a touchdown reception against the Indianapolis Colts on September 13, 2015 at Ralph Wilson Stadium in Orchard Park, New York. Buffalo defeats Indianapolis 27-14. (Photo by Brett Carlsen/Getty Images)
Percy Harvin told the Bills he is retiring, per source.
SEATTLE, WA - OCTOBER 18: Wide receiver Ricardo Lockette #83 of the Seattle Seahawks gestures to the crowd during the game against the Carolina Panthers at CenturyLink Field on October 18, 2015 in Seattle, Washington. (Photo by Otto Greule Jr/Getty Images)
I just wanted to make my teammates, family, & The 12th Man proud!!!! #weallwegot
Thank you, Peyton, and congratulations on your magnificent 18-year NFL career! https://t.co/YdMt19tQ2i https://t.co/jYDXpMmlUA
Up Next

And remember, this is just the right to buy season tickets, not the tickets themselves.

This policy also means that when a team moves into a new stadium, fans can be faced with a choice: pay a steep price for the rights to seats in the new stadium or lose season tickets.

"I'm gonna have to give up my tickets," one New York Jets fan told NJ.com in 2008. "I hate to say it, but it will be like another death in the family."

In a way, this all sort of makes sense. NFL teams only host eight home games per year, and owners are going to try to squeeze as much money as they can out of it.

Take the Rams. They finalized a move to Los Angeles, and when their new stadium opens, nearly every seat in the house is expected to be tied to a PSL.

More from Newsy:
Former NFL Coach Dennis Green Dies At 67
Politicians Pandering To Voters With Sports Is Often A Swing A Miss
Brock Lesnar's Second Failed Drug Test Is A Huge Problem For The UFC